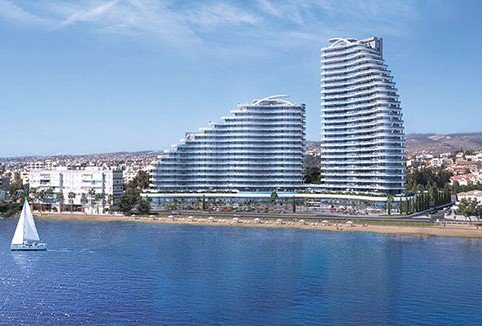 Limassol’s move skywards with buildings over 30 storeys high has largely been welcomed as part of the city’s transformation into a modern business centre, but there are growing concerns that it is all too much, too soon and at too high an environmental cost.

The city has bagged itself some huge projects. Buildings as tall as 37 floors – unprecedented for Cyprus – are already underway.

In the next few years, eight major projects are expected to be completed with seven permits currently being evaluated.

These include One Residence, set to be the tallest residential seafront tower in Europe at 170 metres high with 37 storeys. According to the developers Pafilia, the construction contract signed in December was worth €77million.

Greens MP Charalambos Theopemptou told the Sunday Mail one of the major concerns was how this would affect residents living behind the projects which will range from relatively modest 15 floors to One Residence’s 37.

“The tall building will offer a stunning view of the beach but this immediately screams foul for the people living behind it. It demonstrates disrespect to those people,” he said.

Additionally, the height of the towers will cast long shadows behind them and block the sun’s rays to all the residences behind.

One Limassol resident, who did not want to share his name, said he was concerned how these projects would change the face of Limassol.

“Development is great but at what cost?”

A woman living close to where One Residence is being built told the Sunday Mail that her only problem was the mess the construction was creating outside their homes.

“They clean it up sometimes but especially after it rains, it’s terrible.” However she had no qualms with issues concerning the sun or the view.

“This might actually increase the value of my house,” she said.

According to the town planning department, before a building permit is granted the application must be evaluated by the local authority, the environmental department, civil aviation, fire services, electricity board and if necessary the Cyprus Tourism Organisation.

In a statement to the Sunday Mail, the department outlined some of the pre-requisites the application must include such as adequate parking and shading diagrams for the location which affect to “the smallest degree possible, the comfort of the area and nearby properties”.

Additionally, the land area must be large, providing enough outdoor space which could include greenery, pavements or parks.

While public debates on large new projects are necessary, lecturer at the University of Cyprus Architecture Department Dr Aimilios Michael told the Sunday Mail that when these do occur, they are carried out in a way to “prepare public opinion for a decision already made rather than to promote a creative discussion”.

“I do not think tall buildings should be perceived as negative developments in the urban centres of Cyprus, we just need to be careful to what extent this is done and in what way,” he said.

“Compensatory measures, for instance, are important and necessary for such developments. Such measures could, for example, include public parks or parking places, or even an open access public library or a church – something that could positively contribute to the public’s daily life.”

Limassol’s district secretary of the Scientific and Technical Chamber of Cyprus Yiannis Kakoullis said one of his major concerns is how drastically Limassol’s landscape is going to change.

“It seems to me that permits are given out way too easily without enough discussion. I fear the number of tall buildings will only keep going up,” he said.

“How are these tall buildings going to affect the people nearby? It’s going to cast a shadow on all the people living behind, meaning only a handful of people are going to enjoy the view and sun.”

One resident however argued there’s nothing wrong with Limassol’s changing face. “Many countries have tall buildings why should we lag behind?”

A frequent jogger on Limassol’s seafront told the Sunday Mail: “it’s a modern development. Someone wants to see the sea, it’s not far off.”

Another concern is that these luxury residences will mostly be bought by those wanting to take advantage of Cyprus’ citizenship by investment scheme, introduced in the wake of the 2013 economic crisis.

Limassol Del Mar, a 34,000m2project at Germasogeia being built by Leptos Developers, is an apartment and commercial unit development with facilities such as a gym, spa and swimming pools. A section on their website titled ‘EU Citizenship’ clearly states that “by purchasing a residence at Limassol Del Mar you will have the opportunity to obtain EU citizenship with a Cyprus passport.”

Cyprus’ citizenship for sale scheme states that foreigners who invest €2 million in the property market or Cyprus-based companies, including a residence worth at least €500,000, can obtain citizenship.

For Theopemptou the risk is that a lot of these properties will be purchased for the purpose of a citizenship and then remain empty.

“What will the municipality do in a few years when the buildings are deserted?”

Even the energy efficiency of these new projects is up for debate.

For Michael these new tall buildings can be beneficial in terms of energy saving.

As the external surface of tall buildings is smaller compared to individual units of similar capacity, their thermal performance is usually higher.

“Passive and active systems can also be integrated into their facade, offering higher energy efficiency.”

There is the added advantage of the offices using energy during morning working hours while, energy demands in housing units will be higher during the night, “all from the same sources of energy, offering optimisation in their technical system installations”.

But Theopemptou is concerned about the heat island effect where cities are warmer than rural areas largely due to concrete and asphalt absorbing energy in the form of heat and increasing surface temperature.

“This is already happening but with these huge towers it’s going to drastically alter the city’s temperature, despite it being cooler because of the sea,” he said.

Despite some well-placed reservations, there is a general sense of excitement over Limassol’s future as a taller city.

“This is an opportunity to investigate new housing models that may offer new possibilities for a new way of life,” said Michael, before adding a caveat. “As long as this is done properly.”

Tales from the Coffeeshop: Elections the last thing on the president’s mind