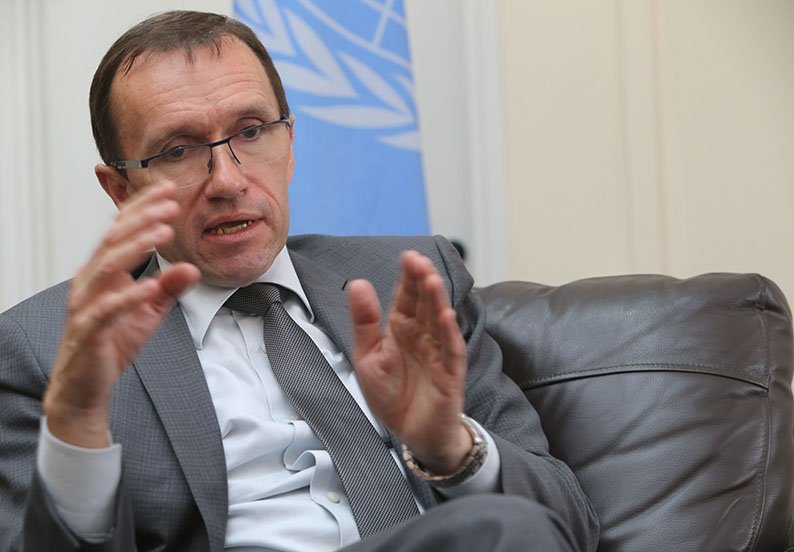 A day after President Nicos Anastasiades launched a scathing attack on UN Special Adviser Espen Barth Eide, the government said that under the current climate, the talks could not produce results.

Anastasiades is preparing a letter for UN Secretary-General Antonio Guterres to address Turkish threats over drilling rights but also to report what the Greek Cypriot side has deemed “unhelpful” statements by Eide.

On Sunday and on Monday, Eide came under attack for being in a hurry, for taking one side’s positions at the expense of the other, and for not treating Turkish threats to Cyprus’ energy plans seriously but instead using them as a stick to pressure the Greek Cypriot side.

Anastasiades, when asked about Eide on Sunday said “the less said about the UN special envoy the better”.

He expressed his regret that Eide appeared to be adopting positions from one side and said any intimidation or pressure when it came to the Cyprus talks would have the opposite effect. He suggested the special envoy was in a hurry because he had an eye on the elections in Norway in September and said Eide should have learned from the mistakes of his 26 predecessors when it came to adopting the positions of one side over the other.

At issue was the view that Eide agreed with the position of Mustafa Akinci that the UN could submit bridging proposals but it must be requested by both sides, the Turkish Cypriot leader clarified.

But Anastasiades responded: “We have said repeatedly that these talks are Cypriot owned. We do not want arbitration… this was an agreement… we do not want timetables and we constantly hear about the risks that may arise if the talks are prolonged,” said Anastasiades.

Asked if all of these issues would be included in the letter he planned to send to Guterres, Anastasiades said: “I have no intention of getting into a personal dispute with the special adviser but I will draw attention to any statements made that cause mistrust or give the impression of adopting the positions of one side at the expense of the other.”

He said he wanted to know whether the secretary-general believes the talks were being conducted under threat because this would be “unthinkable” and a violation of international law.

UN Spokesman Stephane Dujarric said on Monday that Eide continues to do his job with the upmost confidence from the UNSG.

“The role of any envoy mediating between two parties is a challenging one. Mr Eide continues to do his job with the utmost confidence of the secretary-general,” Dujarric said.

Guterres, concerned by the state of the peace talks, has put forward “some ideas” which Eide, is expected to put to the two leaders when they next meet on Thursday.

Eide, who met Guterres in New York on Friday, said they had a “thorough, strategic discussion” on the “way ahead”. No details have been released of what Guturres’ ideas contain, but for him to suggest ways of breaking the deadlock reflects how seriously the international community is taking the possibility of the talks collapsing. Eide did make reference to putting “other options” on the table.

“If we must speak honestly right now, we should say that we are on the verge of either a great progress or collapse of the Cyprus negotiation,” Eide told Turkish Cypriot newspaper Halkin Sesi on Monday.

Government spokesman Nicos Christodoulides said that from the information the government has, there is nothing specific in these ‘other options’ that relate to matters of substance.

“We are in a crucial phase of the negotiations and we see the UN secretary-general’s special adviser adopting in his statements the same intimidation we hear daily from the Turkish side,” said Christodoulides on Monday.

“We know that negotiations are not being conducted in a particularly good climate. Instead, they are conducted in a climate that cannot in fact produce results.”

He said Eide, instead of criticising the daily threats by Turkish officials, “basically invokes them to indirectly criticise the Republic of Cyprus’s energy plans”.

Instead of criticising the threats that could lead to a crisis and the termination of negotiations, he said the UN envoy was using them to publicly exert pressure on the Greek Cypriot side.

“No one can view this approach as constructive,” the spokesman said.  “Those who are not critical are responsible because in fact, if we do not criticise, we encourage such actions.”

Christodoulides said the Greek Cypriot side had also seen Eide’s statements on “a strengthened role for the UN”, which he said was something Akinci was asking for and which Eide agrees with.

“This has already been discussed and it is clear that there is no such prospect,” said the spokesman.

He said even the UN secretary-general had clarified that the UN does not assert that it should have such a role while Eide appeared to be encouraging it.

“We are at a critical juncture. We have critical and sensitive issues to discuss and the climate is not the best because of Turkey’s actions,” he said.

He said the role of the UN was clear and the UNSG has made it clear that they did not claim a role of arbitration. “But we see that the special advisor adopts a different line. Threats are invoked to the implementation of the Republic of Cyprus’ energy plans or in view of the presidential elections to be held in 2018.”

Eide is expected to arrive on the island early in the morning of May 10.  On the same day there will be a meeting between Anastasiades, Akinci and the head of the permanent structural reform support group of the European Commission Marten Verwey to discussion Turkish Cypriot harmonisation with the EU acquis

EU President Jean-Claude Juncker’s representative for Cyprus, Peter Van Nuffel will also be in Cyprus for contacts on May 10 and 11.