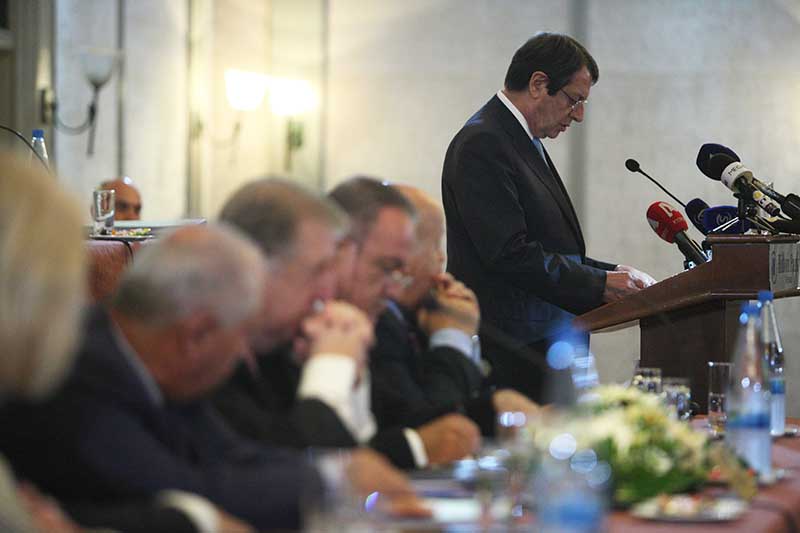 President Nicos Anastasiades buttered up civil servants on Tuesday saying they had shown exemplary responsibility in the face of the financial crisis, but added they would need to repeat it if reform of the public service was to go ahead.

He said it was not enough to talk about nepotism but to change the system so it did not happen.

Addressing civil servants’ union Pasydy at its 54th annual general meeting, Anastasiades thanked civil servants for the crucial role they played during the “most critical periods in the history of the Republic of Cyprus”, including the period following the 1974 Turkish invasion and the recent financial crisis.

“I especially want to commend Pasydy’s leadership for its seriousness and its members’ sacrifices, which resulted in the state gradually being able to stand on its feet and show stable growth,” he said.

“As a result of which, through constructive dialogue, we were able to restore this year at least some of the basic rights that had been suspended.”

At this time, Anastasiades noted, the public service is called on to tackle yet another challenge – to rid itself of its traditional structural distortions, so that it can “better serve the public, as well as growth”.

“Our goal is to render it even friendlier to growth initiatives and less vulnerable to political intervention,” he pledged.

A set of government bills drastically overhauling public service was rejected by parliament in December.

“We then undertook a new round of consultations with political parties, amended and strengthened the bills, incorporating some of their suggestions, so that they can be voted by parliament,” the president said.

“It is inconceivable for a modern public service to not have a fair, meritocratic appraisal system that acknowledges and rewards conscientious and efficient civil servants. It is equally inconceivable that the system of hiring and promotion not to be based on transparent and objective criteria, or be susceptible to political intervention.”

It is not enough to speak of ‘rusfeti’ (favouritism), Anastasiades said.

“We must redesign the system so that it does not allow interventions,” he noted.

For its part, the president said, the government has restored a number of entitlements suspended during the financial crisis, and will respond to any demands it deems “essential”.

“I am personally aware of your particular sensitivity to those of you with children, and have been informed by Pasydy’s secretary-general on the need to operate one more kindergarten,” Anastasiades told civil servants.

“I am pleased to announce that the government stands ready to support your social work, for which I congratulate you, by leasing state land at the Nicosia General hospital for you to construct the kindergarten.”

Harmonised inflation rises to 2.1% in April