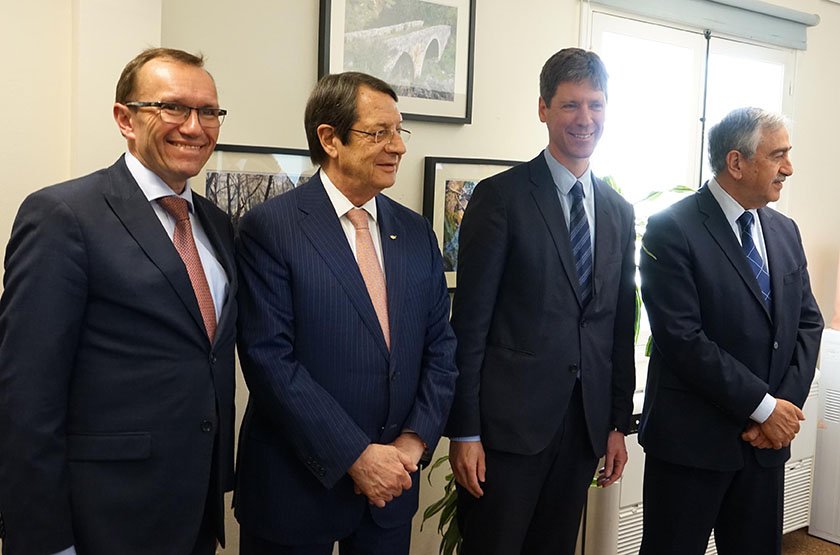 Much work remains to be done to bring the Turkish Cypriot community up to speed with European law, President Nicos Anastasiades said on Wednesday.

Following a joint meeting with the director of the European Commission’s structural reform support service Maarten Verwey, Anastasiades said they had a chance to “review the status of the Turkish Cypriot community’s familiarisation with the European acquis [communautaire]”.

An ad-hoc committee set up under European Commission president Jean-Claude Juncker will forward its detailed report to each side to review, the president added.

Asked whether the Turkish Cypriot community has inched closer to harmonisation with EU law, Anastasiades declined comment other than “a lot of work is required”.

Speaking of the necessity of the committee’s mandate, Anastasiades offered as an example the adoption of the euro by a reunified Cyprus from day-one.

“It is very important to have the euro adopted from the first day [post-solution],” he said.

“In order to do this, the banks must be able to respond, while at the same time we must know the cost of the solution beforehand.”

Anastasiades was referring to an effort to estimate the total cost of a comprehensive solution to the Cyprus problem by the International Monetary Fund and the World Bank, which has been held back because the Turkish Cypriots have not disclosed the necessary economic data.

“There is still no breakthrough in this regard,” the president said.

“It seems they are facing problems or setting such preconditions as to defeat the purpose of the data review.”

In a statement, Verwey said that, since mid-2015, the commission has “organised 34 missions to Cyprus by more than 200 officials to assist the bi-communal ad hoc committee for EU preparation”.

“This is an ongoing effort,” he said.

“The unique context of the Cyprus settlement negotiations process imposes certain limitations on our work and our findings at this stage do not cover the entire EU acquis.”

Nevertheless, he noted, significant progress has been made, and “I believe that we now have a far better understanding of the level of preparedness for the EU of the Turkish Cypriot community than before”.

“From our side we stand ready to continue our support through commission experts, deploying technical assistance upon request, involving private sector experts and member state officials and assisting with analysis and advice in a partnership with other international actors,” Verwey said.

In a statement, Akinci said he was briefed on preparatory work to identify the financial and social impact of a possible solution.

He stressed the importance of expediting work relating to the implementation of a federal solution.

Akinci said banks in the north did not have access to international funds because the breakaway state was not recognised.

He said €3m had been earmarked by the EU to fund stress tests and reviews – a job that must be done with or without a solution.

However, he said, the matter stalled because of disagreements within the administration in the north.

According to Akinci, the finance minister, Serdar Denktash, told him the Turkish Cypriots didn’t need anyone’s money and they could cover their requirements on their own.

Later, Akinci said, they found a formula of providing the data the EU wanted without the Greek Cypriot side knowing before a settlement.

But the latest he heard was the administration in the north did not want the EU’s money, a stance that Akinci considers wrong.

He said he spoke to Denktash about it, asking him to change his stance because it gives Anastasiades “the opportunity to criticise us before the EU officials”.

No charges over alleged election expenses fraud by Tories

Kelly Clarkson to be a judge on ‘American Idol’