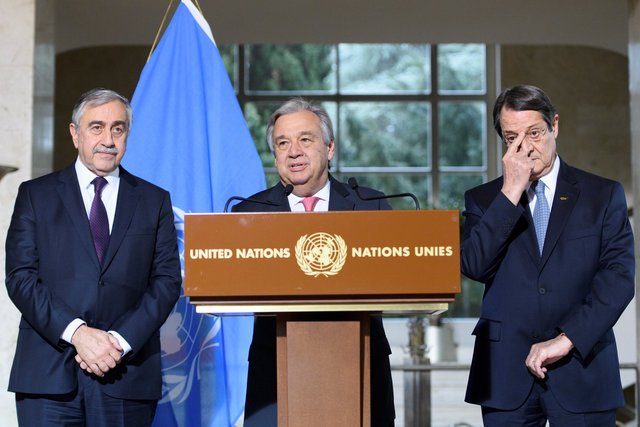 Despite the fiery rhetoric of previous days, President Nicos Anastasiades made no mention in his letter to United Nations secretary-general of UN special envoy for Cyprus Espen Barth Eide’s perceived adoption of Turkish positions, he confirmed on Wednesday.

Earlier this week, both Anastasiades and government spokesman Nicos Christodoulides had publicly complained that Eide’s warnings that failure to make substantive progress in the stalling Cyprus peace talks by July might result in increased tension. He was referring to Turkey’s position that it will “not allow” hydrocarbons-related drilling in Cyprus exclusive economic zone and was accused of siding with Turkey.

“At the very least, we expected a renunciation of these threats, instead of an impartial UN official citing them,” Christodoulides said.

But asked on Wednesday whether the letter included evidence pointing to Eide’s perceived lack of impartiality, Anastasiades’ reply was a blunt “no”.

The letter, more than three pages long, included a document prepared last September by the SG`s Special Advisor Espen Barth Eide containing the 103 open issues of the first day of the implementation of a solution to the Cyprus issue.

According to reports, the letter contained a short assessment of everything that has taken place at the UN-sponsored negotiations for a Cyprus solution, but also referred to the reopening, since the Geneva conference on Cyprus, by the Turkish Cypriot side of issues on which convergences had been achieved.

It also referred to Turkish demands that the Greek Cypriots say alter the aim for a viable and functional bizonal, bicommunal federal solution.

Special reference was made in the letter to Turkey’s behaviour and provocations with the issuing of several Navtex, the illegal Turkish seismic vessel Barbaros set to conduct 3D research in Cyprus exclusive economic zone, and other actions that aim to prevent the Republic of Cyprus from exercising its sovereign rights in its EEZ.

Anastasiades expressed his readiness and determination to continue with the negotiations, making clear that certain preconditions must be fulfilled for the leaders to return to Geneva, an issue the leaders are expected to discuss at their joint meeting on May 17.

“It is said that is four pages. I don’t know what he found to squeeze in those four pages but if he tried to write about our constructive stance, they won’t be enough,” Akinci said.

“From what I’ve read and from his statements, he was going to complain about Eide, and Turkey and us about the natural gas issue.”

Akinci reiterated that his side would do its best to find a settlement and that the weeks until July were critical.

Meanwhile, the US State Department announced on Tuesday that it recognises Cyprus` right to develop its resources in its EEZ.

Asked to comment on Turkish provocations in the Cypriot EEZ, a State Department official, speaking on condition of anonymity, said that the “US policy on Cyprus’ EEZ is longstanding – we recognise the Republic of Cyprus’s right to develop its resources in its Exclusive Economic Zone.”

It further said that the State Department continues to “believe the island’s oil and gas resources, like all of its resources, should be equitably shared between both communities in the context of an overall settlement”.

“We continue to discourage actions that increase tensions in the region,” the official added.