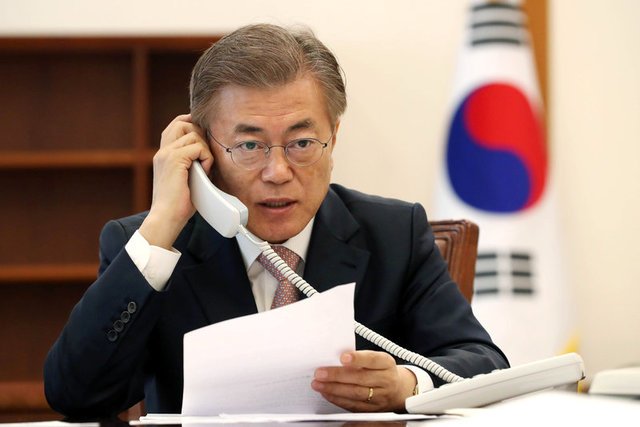 By Ju-min Park and Christine Kim

South Korea’s new President Moon Jae-in told Chinese leader Xi Jinping on Thursday that North Korea must cease making provocations before tensions over the deployment of a U.S. anti-missile system in the South can be resolved, officials said.

Moon came to power with a promise to review the deployment of the Terminal High Altitude Area Defense (THAAD) anti-missile system, which is opposed by China but is being deployed as a show of strength against continued provocation by the North.

China has rigorously objected to the deployment, saying it destabilised the regional security balance and did little to curb the threat posed by North Korea’s nuclear and missile programmes, which Pyongyang is conducting in defiance of U.S. pressure and United Nations sanctions.

“President Moon said he understands China’s interest in the THAAD deployment and its concerns, and said he hopes the two countries can swiftly get on with communication to further improve each other’s understanding,” Yoon told a briefing.

“President Moon said the THAAD issue can be resolved when there is no further provocation by North Korea,” Yoon said.

Moon said in his first speech as president soon after he was sworn in on Wednesday that he would immediately begin efforts to defuse security tensions on the Korean peninsula and negotiate with Washington and Beijing to ease the THAAD row.

He also said he was prepared to go to Pyongyang “if the conditions are right”.

Moon’s swearing-in brought to an end a months-long power vacuum after previous president Park Geun-hye was ousted in a corruption scandal in March.

Regional experts have believed for months that North Korea was preparing for its sixth nuclear test and was working to develop a nuclear-tipped missile capable of reaching the United States, presenting U.S. President Donald Trump with perhaps his most pressing security issue.

As well as clouding efforts to rein in North Korea’s nuclear ambitions, the THAAD deployment has also led to recriminations from Beijing against South Korean companies.

Moon explained the difficulties faced by South Korean companies that are doing business in China and asked for Xi’s “special attention” to ease those concerns, Yoon said.

South Korea and the United States began deploying the THAAD system in March and it has since become operational.

China sees it as a threat to its security and has called for its withdrawal, but has also denied it was doing anything to retaliate against South Korean businesses.

“For a long time, China has upheld the goal of the denuclearisation of the Korean peninsula, protecting the peace and stability of the peninsula and resolving the problem via dialogue and consultation,” Xi said, according to the ministry.

The deployment of the THAAD system was agreed on by Park’s administration last year after North Korea conducted a long-range rocket launch that put an object into space. Moon said during the campaign for this week’s snap election that he wanted to review that decision.

He and Xi agreed to exchange special envoys soon and Moon said he also planned to send a delegation to Beijing to discuss the North Korean nuclear problem and the THAAD deployment, according to Yoon.

Despite Chinese anger at North Korea’s repeated nuclear and missile tests, China remains the isolated state’s most important economic and diplomatic backer, even as Beijing has signed up for tough U.N. sanctions against Pyongyang.

China’s foreign ministry made no direct mention of the anti-missile system in its statement about the discussions. Beijing hopes that the new South Korean government attaches importance to China’s major concerns and takes real steps to promote the healthy and stable development of ties, Xi said.

Japan has been concerned that Moon will take a tough line on feuds stemming from the bitter legacy of its 1910-1945 colonisation of the Korean peninsula and could fray ties at a time when cooperation on North Korea was vital.

Moon told Abe to “look straight at history” and not make the past “a barrier”, South Korea’s presidential office said.

Upset! The 20 most shocking results of the season