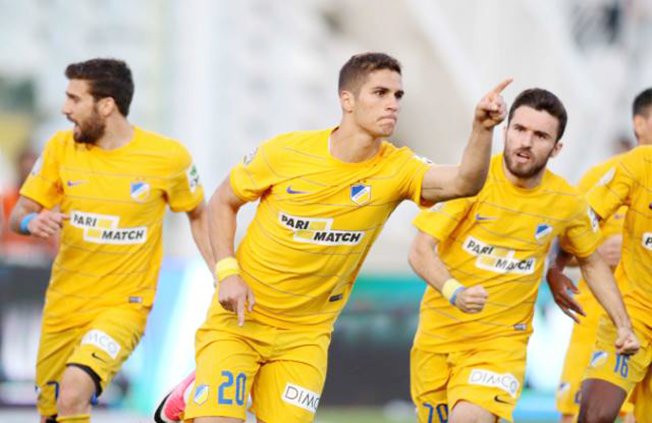 It is the 26th top-flight title in their history.

It was a game that was decided by two big calls by the officials, first by referee Vassilis Demetriou who awarded a harsh-looking penalty to Apoel with the scores level at 1-1, and then by his assistant, who wrongly flagged Omonia’s Matt Derbyshire as offside as he headed past Apoel goalkeeper Boy Waterman from close range.

Apoel deserved the win though as they were the better side on the day, with Omonia rarely being able to venture forward.

However it was Omonia who took the lead against the run of play as Derbyshire rose above defender Inaki Aztiz to open the scoring in the 10th minute.

The second half started with the same pattern as the first, with Apoel on the front foot. In one their forays forwards, Apoel’s Giorgos Efraim went down in the penalty area after a challenge by defender Marios Demetriou.

The referee pointed to the spot and after a 12-minute interruption in play due to crowd trouble, Pieros Sotiriou cooly sent Panayi the wrong way.

In the other Championship Group game on Saturday, AEK and AEL drew 1-1 with two penalties settling the game.

AEK took the lead in the first half through Jorge Larena, while Piti equalised for AEL in the second half.

How many shopping malls do we need?