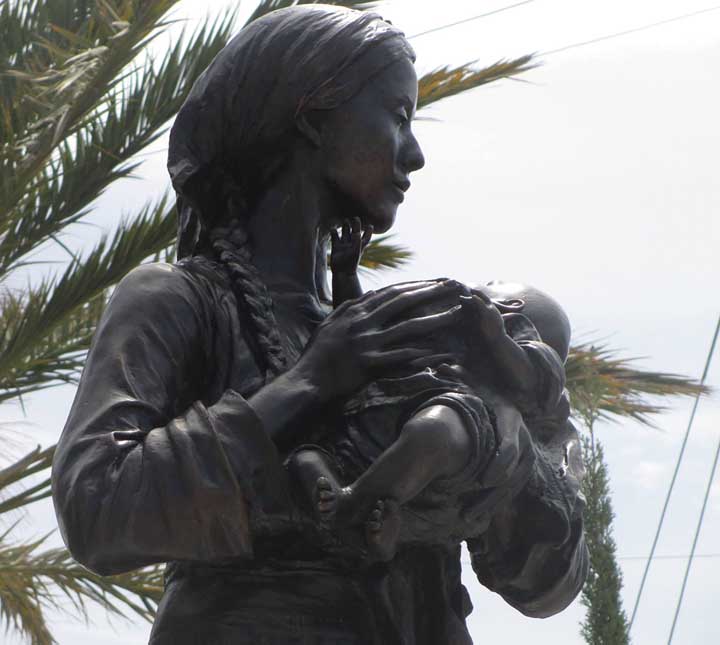 A stunning sculpture honouring rural mothers was unveiled by the minister of agriculture in Argaka in Paphos on Sunday at an emotional event.

The bronze which depicts a mother and child was created by renowned Paphos artist Yiota Ioannidou to honour all working mothers of the area.

The community leader of Argaka, Spyros Pelopida, told the Cyprus Mail that the statue is a legacy of a local man, following the premature death of his wife in a car accident.

Pelopida said that Christofi Karamanis worked in the fields alongside his wife, and after she tragically died, he was left to bring up their four daughters and son on his own.

“They were all at school and he realised how women have to juggle work and looking after the children and the house,” he said.

Pelopida said that work on the bronze began before Karamanis died, but it was his wish for his children to ensure that the bronze was completed as a memorial to his wife and all other women like her.

“At the unveiling, the artist spoke about her idea and how she feels about it and everyone was tearful as we all felt as if it is our mother. It was a wonderful and emotional experience,” he said.

Ioannidou’s recent creations include “Sol Alter”, which leans on a rock in Kato Paphos and pays homage to Aphrodite, the goddess of love, and another, “The Little Fisherman”- a bronze of a young boy and a large fish, is found close to Paphos harbour.

The Argaka sculpture took the artist around five months to complete, a process she carried out as fast as possible, as she wanted Karamanis to view the work before he died.

“I used a model that I was told looked very much like Mr Karamanis’ wife. I met him in hospital and discussed the bronze with him and was hoping to finish it before he died, but sadly this was not to be,” she said.

Ioannidou said that his five children are very pleased with the result which is a symbol of unconditional love, safety, continuity and sacrifice.

“The Cypriot ‘farmer mother’ is still the heart of Cypriot agricultural families and for that we honour, thank and show our gratitude,” said Agriculture Minister Nikos Kouyialis at the event

Waste scam whistleblower explains why he confided in mayor