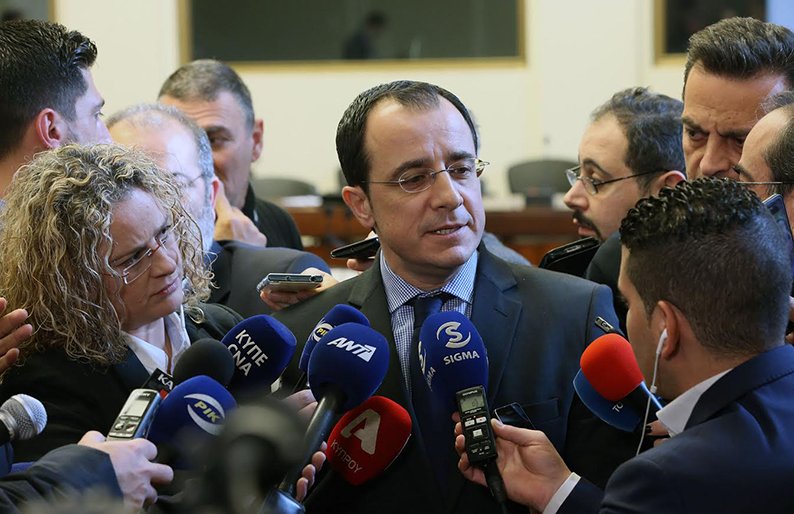 The two leaders will discuss how the negotiations process will continue when they meet on Wednesday but they are more likely to point in “a direction” for the talks rather than a definitive next step, government spokesman Nicos Christodoulides said on Monday.

Christodoulides, speaking on public broadcaster Cybc, said if there was to be a continuation of the negotiations at a new Geneva, it would involve not just the leaders but also the guarantor powers.

President Nicos Anastasiades has said he is not opposed to a new Geneva conference if enough preparation is done in advance. The leaders are to evaluate their last three meetings come Wednesday.

“I do not think that on the 17th there will be a decision, but there may be a direction for how the process will proceed,” Christodoulides said.
“We will see what the leaders decide and also what are the positions of Greece, Turkey and the United Nations,” he added.

The spokesman went on to dissect the meetings Greek Prime Minister Alexis Tsipras had over the weekend in Beijing with Turkish President Tayyip Erdogan on Saturday, and with UN chief Antonio Guterres, and Russian President Vladimir Putin on Sunday. Anastasiades is to be fully briefed on Thursday by Greek Foreign Minister Nicos Kotzias who will be in Cyprus. Russian Foreign Minister Sergei Lavrov will also be in Cyprus the same day as will other foreign ministers from the Council of Europe for a summit in Nicosia.

“These issues relate to the content of the solution. He [Tsipras] focused discussion with the secretary-general on the need for a result that meets the expectations of all the Cypriot people before it can be accepted and put to referendum,” Christodoulides said.

He said there was a common understanding that there should be adequate preparation before going back to Geneva.

“But we must also mention that the conference on Cyprus in Geneva, does not only involves the consent of the Greek and Turkish Cypriots, it needs the consent of Greece and Turkey and Great Britain as well,” he added.

Tsipras did not discuss security and guarantees when he met with Erdogan, the spokesman said.

“We have to see how things develop in the coming days. The dialogue continues. The result is up to the two leaders, but also important are the Greek and Turkish positions. The important thing is that everyone, Greece, Turkey and the UN want to go to a Geneva conference that works.”

Christodoulides said Guterres had expressed his readiness, if requested by both sides to assist where he could as long as such a request came from both leaders.

Referring to the letter Anastasiades sent to Guterres about Turkey’s threats to Cyprus’ drilling programme, along with some criticisms of UN Special Envoy Espen Barth Eide, the spokesman said the government had not received a reply.

Anastasiades on Sunday hit back at critics and called for the unity of the political parties so that the challenges ahead could be met.

At separate events, he appealed to all political parties for unity, “both to those who blame me for having made unacceptable concessions, but also to the others, who dictate that I must continue and exhaust all options”.

He also hit back at those who say he is now only focused on the presidential elections next year, and not on the talks, saying that in these critical times, it was Cyprus above all that was important and not who would or would not be a candidate for president.

“What do I do with the chair of the president if my country will be partitioned, if my homeland is in danger, if Hellenism is in danger,” he said.

“My sole concern, through the negotiation process is to prevent stillbirth solutions that contain the seeds of division and of confrontation between Greek and Turkish Cypriots. ”