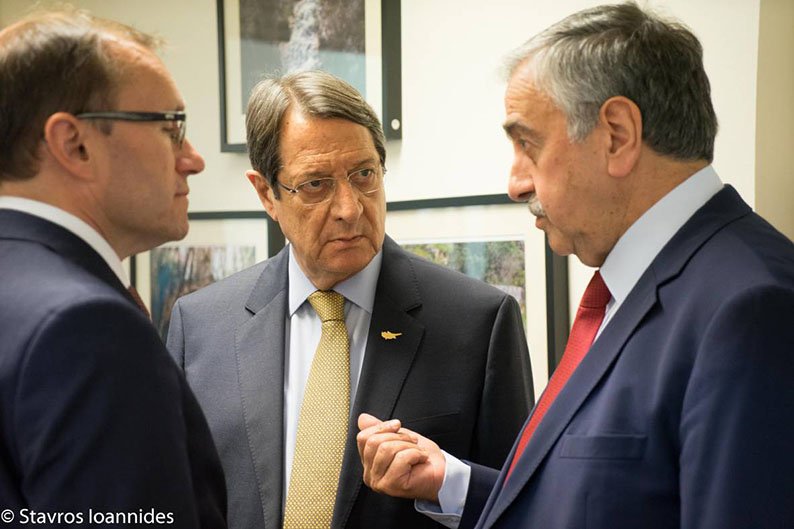 The yawning chasm between President Nicos Anastasiades and Turkish Cypriot leader Mustafa Akinci became more apparent on Wednesday when they failed to agree to a way forward, instead mandating UN Special Adviser Espen Barth Eide into a bout of shuttle diplomacy.

As UN Secretary-General Antonio Guterres was telling reporters in Strasbourg that the UN was ready to convene a new conference in Geneva if the two sides thought that would be a positive step, the leaders left a crunch five-hour meeting that produced no clear direction.

The meeting was the last of four since talks resumed after stalling for two months in mid-February, and was to supposed to determine the way ahead.

Interestingly, Guterres said that calling a Geneva conference did not necessarily mean convening it “when we are sure about success”, because “the obligation of the United Nations is not only to act when there is a prospect for success”, it was also obligated to act to promote peace and understanding, he said.

But Anastasiades appeared not to have budged on his opposition to a Geneva meeting without the requisite progress, and was cagey on his return to the presidential palace, saying only that Eide would meet separately with the two sides in the hopes of arranging a new more substantial leaders’ meeting and take it from there.

He also said he had put forward constructive suggestions, which Akinci later called unacceptable conditions to convening a conference in Geneva.

Anastasiades said Eide would meet both sides separately over the next 24 hours, to “see where we are going” and whether there were prospects for another meeting that would lead to results.

“We have submitted a concrete proposal, a creative suggestion, that could really create the preconditions for a settlement of the Cyprus problem,” he said.

“There was disagreement. And the special adviser undertook the task to have deliberations during the next days with the two parties to see whether there are prospects for a substantive and creative meeting, which will lead us to the desired result.”

The president said that during the meeting the leaders had been informed by the negotiators of their consultations since the last talks’ session on May 11 – they met all day on Tuesday – to see how useful a new Geneva conference might prove.

“There are disagreements,” he said. “Methods that have been tested and failed cannot be repeated,” he added in reference to the last Geneva conference in January.

Anastasiades also talked about informing the people, and the political parties as to the current situation in the talks before taking any decisions and declined to be drawn further into what had transpired at the meeting or to reveal his proposal.

On his return to the north, Akinci was more forthcoming, saying he had suggested setting a date for a Geneva meeting in June without preconditions, a postponement of drilling in Cyprus’ EEZ slated for July, and for all issues to be examined holistically with give and take.

“There is no other method of discussion, all the others have been tried without success,” he said.

Unless this was done, a solution would not be possible, he added. However, he said, none of his suggestions were accepted by Anastasiades because his view was that this had also been tried in the past without success.

However, Akinci said this was not the case and he didn’t understand Anastasiades’ stance.

“Our proposal applies the basic principle of the agreement of February 14, 2014 on the discussion of interrelated chapters,” Akinci said.

He said serious differences remained between the two sides “both large and small”, despite progress made.

The Turkish Cypriot leader also said the “constructive proposals” made by Anastasiades at the meeting were not constructive at all but were rather conditions to attending a Geneva conference.

According to ‘leaked’ reports in the north, Anastasiades’ conditions were that territorial adjustment and maps and the issue of the guarantees should be agreed first in Geneva followed by the remaining four chapters. These are: EU, economy, property, governance and power sharing.

“To talk about constructive and creative proposals… and then you put on the table conditions that cannot be accepted… this does not bring the process to a solution,” said Akinci.

If Anastasiades does not change his stance, it will not only be Akinci who will not be able to conduct negotiations with him but those Turkish Cypriot leaders who come after him, he added.

What the Turkish Cypriot side now expects is an impartial and objective account of these happenings to be transmitted to the UN secretary-general by his special adviser he said.

Also, Akinci said he did not see how the Greek Cypriot side saw Eide as being closer in stance to the Turkish side. “We don’t see it that way,” he said.

The Turkish side does not expect Eide to be close to the Turkish positions, but to be impartial and objective, he added.

In Strasbourg on Wednesday, UN Secretary-General Antoino Guterres said the UN was ready to facilitate another Geneva conference if both leaders felt that would be a positive step.

Replying to a question from the Cyprus News Agency, he said: “The UN has a role of support for two communities to be able to come together to an agreement for the reunification of the island. An agreement needs to be endorsed by the guarantor powers, where Greece and Turkey have a very important role”.

Guterres said he had met last weekend with Turkish President Tayyip Erdogan and Prime Minister Alexis Tsipras in China and called for a flexible and constructive approach of the two countries in order to be able to address effectively the problem of security and guarantees which was the central question for the guarantor powers.

“And my special envoy has been working closely together with the two leaders and the two communities in order to see if remaining problems related to the more internal questions can be addressed, we are ready to convene a new conference when the parties believe that we can do it an effective way,” he said.

“I do not say that we will only convene it when we are sure about success because the obligation of the United Nations is not only to act when there is a prospect for success, the obligation is to act in all situations to promote peace and understanding among people.

“So we are working closely with the parties and as soon as the parties believe that there is scope for reconvening the conference and trying to find a global solution for outstanding problems, will do it, very much hoping that this opportunity that was opt, will not be missed,” he concluded.

(Tahsin Eroglu contributed to this article)

First phase of ‘Nicosia triangle’ revamp being delivered on Sunday

Coronavirus: 90 per cent of Paphos weddings rescheduled for later in 2020 and 2021