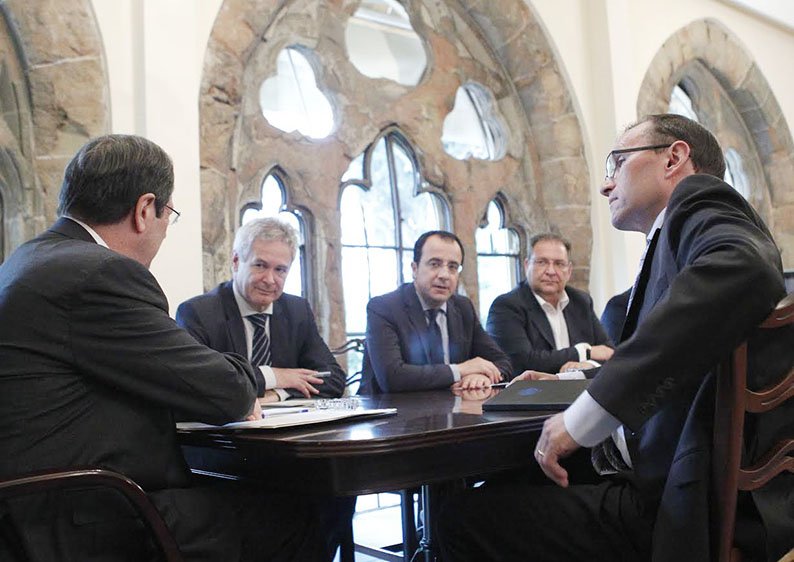 THERE appeared to be no clear path ahead for reunification talks on Thursday, with the two sides agreeing to continue talks under the same format and with the UN facilitating the process.

No dates were set for further meetings of the leaders, however.

Espen Barth Eide, the UN Secretary General’s Special Adviser on Cyprus, said both sides were ready to move into the “final phase” of Cyprus talks, but there were still some pending issues.

“Both sides as I understand them are ready to move into a final phase but there are still some outstanding issues that have to be settled,” he said, adding that “they are not settled right now.”
“I will continue this shuttle diplomacy.”
Eide said he hoped for a conclusion “as soon as possible, but I cannot say when we are concluding.”

It might even go into next week, the UN official said.

Eide pledged to work “as intensively as I can with them, and when there is something more to share you will hear it.”
He added: “We are working in a good spirit and with a genuine intent to find a common platform.”

The Norwegian diplomat was speaking after meeting in the north with Turkish Cypriot leader Mustafa Akinci. The tete-a-tete lasted just over two hours.

Eide had made similar remarks earlier in the day after seeing president Nicos Anastasiades.

However the signs seemed ominous, given that Eide was not pencilled in to meet with the leaders again over the coming days.

Not only that, the UN official was scheduled to depart Cyprus on Thursday evening, government spokesman Nicos Christodoulides revealed.

Christodoulides spoke to reporters after he met separately – in his capacity as head of the president’s diplomatic office – with Eide, following the latter’s meeting with Anastasiades.

Asked what Eide’s absence from Cyprus indicated during this critical timeframe, and whether it meant the talks process was over, Christodoulides said:

“I would not say they [the talks] are stopped, or terminated. I am simply citing certain facts. Let us all be patient, the National Council will be briefed at 10am on Monday and subsequently the public will be informed.

“For us, there is no other option but to do whatever is possible to solve the Cyprus problem. That could happen if there is a positive response to the president’s proposal. Thus, this is the moment of truth, to see whether we are truly seeking a settlement.”

The leaders of the communities failed to chart a clear-cut way forward on Wednesday in what was the last of four scheduled meetings, which the UN was hoping might lead to a deal or an understanding for a new Geneva-style conference.

Akinci on Thursday accused the Greek Cypriot side of lacking goodwill and setting preconditions instead of tabling constructive proposals.

Chiming in, Turkey’s foreign minister Mevlut Cavusoglu, who spoke on the phone with Akinci following the leaders’ latest meet, panned Anastasiades for his “strange proposals.”

It was leaked on Wednesday that Anastasiades wants territorial readjustments, security and guarantees to be discussed first and separately in a new conference, before moving on to the other issues – EU, economy, power-sharing and property.

By contrast, Akinci is understood to be seeking a holistic approach, discussing all issues as a package as some of the aspects – like property and territory – are interrelated.

The speculation is that Anastasiades wants to extract concessions for the Turkish Cypriot demand for a rotating presidency.

Speaking to the NTV station, Cavusoglu said the Greek Cypriots wanted to close the territory chapter first, then deal with the rest.

He also accused Anastasiades of “populism” ahead of the 2018 presidential elections in the south.

Hitting back, Anastasiades said it was in fact the Turkish side that is avoiding discussing issues of substance.

“I made a proposal to demonstrate that I mean what I say, which is that I want a solution. But a settlement will not come about by repeating ourselves and sticking to our differences.

“I hear talk of cross-process talks and so forth. But which side is it who until now refused to touch upon – until at least Mont Pelerin – the issues of territory or guarantees? They even refused to brainstorm. They excluded these two issues so as to leave them till the end.”

The president revealed intentions to make public his proposal, but said he would hold back while Eide is undertaking a new initiative to keep the process moving forward.

Anastasiades made the comments coming out of a meeting at the presidential palace with Greece’s visiting foreign minister Nicos Kotzias.

“I have briefed Mr Kotzias on the proposals I submitted. We are completely aligned with the Greek government,” he said.

Earlier, Anastasiades had a phone conversation with Greek prime minister Alexis Tsipras to discuss the latest in the state of play over the Cyprus talks.

Kotzias is in Cyprus attending the ministerial session of the Committee of Ministers of the Council of Europe, the last event under Cyprus’ chairmanship of the CoE.

Turkey ready to retaliate against any threats, Erdogan warns