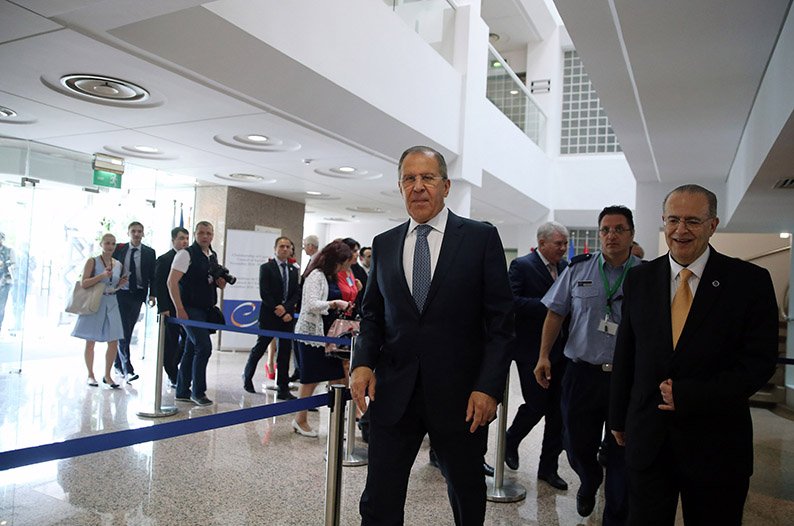 He was speaking during a joint news conference with his Cypriot counterpart Ioannis Kasoulides following a meeting of the two in Nicosia.

Asked by a reporter about Turkish threats in Cyprus’ EEZ, Lavrov said:

“All such issues and controversies should be discussed within the legal framework, with the agreement of all stakeholders.

Lavrov arrived in Cyprus earlier in the day for bilateral talks, and on Friday will attend the 127th Ministerial Session of the Committee of Ministers of the Council of Europe, the last event under Cyprus’ chairmanship of the CoE.

Also on Friday he will be received by president Nicos Anastasiades.

He departs Cyprus on Saturday.

Speaking through an interpreter, Lavrov reiterated Moscow’s support for a just, lasting and viable settlement of the Cyprus problem, based on relevant UN Security Council resolutions and the agreements reached between the two communities.
For his part, Kasoulides said he briefed his Russian counterpart on the current state of play in the Cyprus negotiations and expressed Nicosia’s appreciation for the “unremitting principled position of the Russian Federation”.

Kasoulides said he informed Lavrov on Cyprus’ hydrocarbons exploration and exploitation programme and referred to “Turkey’s aggressive policies in the Eastern Mediterranean, which further complicate the efforts to reach a settlement of the Cyprus problem.”

Responding to a question, Kasoulides said he discussed this issue with Lavrov, but would not be drawn on the details.

“There is a common understanding that international law, the UN Convention on the Law of the Sea, has to prevail in all circumstances.”
Discussions with Lavrov also covered bilateral relations, cooperation in the economic and legal fields, as well as cooperation in international fora.
During a working lunch, the two ministers would also push for the finalisation of various agreements under negotiation.
The two ministers would be discussing a number of global and regional issues of mutual concern, including Ukraine and the necessity for the full implementation of the Minsk Agreement.

On Syria, Kasoulides stressed that Cyprus, the closest EU member state to this country, would like to see a Syrian-led political transition process to establish a democratic, inclusive and representative government by the Syrians, for the Syrians.

On EU-Russia relations, Kasoulides commented that “the current state of relations is beneficial to neither side” and expressed hope for the re-evaluation of the situation, leading to a “mutually beneficial reengagement”.

Lavrov, in other remarks, called Cyprus an “important time-tested partner in Europe.”
Although bilateral trade has shrunk over the past years, it has picked up significantly in recent months, he noted.
On international terrorism, Lavrov said it called for a “joint, unified agenda instead of the confrontational policy chosen by several Western countries.”

The fight against terrorism calls for a settlement in the Middle East and Northern Africa, but first and foremost in Syria, he went on.
Commenting on the state of Russia-EU relations, he said that there is no cause for satisfaction there and noted that cooperation must be based on equal rights and mutual respect. For that to happen, Brussels must stop having a “one-way street game,” Lavrov said.

Lavrov was also asked about the alleged passing of classified information to senior Russian officials by US President Donald Trump.

Lavrov added that a month ago the Trump administration imposed a ban on laptops being allowed on airplanes coming from seven Middle Eastern countries, due to a terrorist threat.

“So if you’re talking about that, I see no secret here.”

Asked about reports concerning an initiative in Washington to create a Nato-like alliance among Persian Gulf countries, Lavrov said that complicated issues in the Middle East and Northern Africa should be solved on a collective basis, excluding no one.