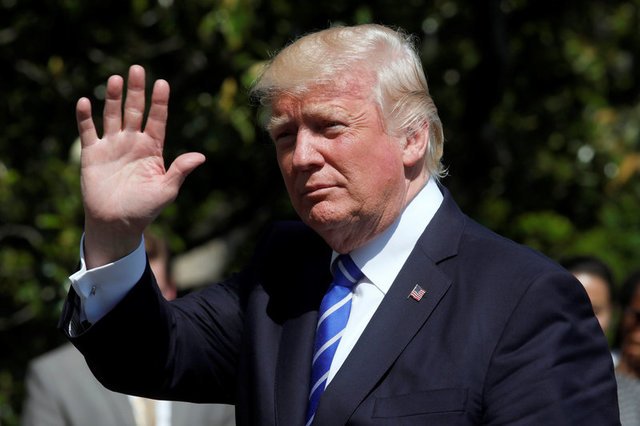 President Donald Trump waves as he walks on the South Lawn

President Donald Trump on Thursday assailed the Justice Department’s appointment of a special counsel to probe possible ties between his 2016 presidential campaign and Russia, calling it “the single greatest witch hunt” in US history and a move that “hurts our country terribly.”

Trump also said he was close to selecting a new FBI director to replace James Comey, who he fired last week, and that former senator and one-time Democratic vice presidential candidate Joe Lieberman was among the top candidates.

Trump‘s defiant comments stood in contrast to his measured statement on Wednesday night after former FBI chief Robert Mueller was named as special counsel, in which he said “a thorough investigation will confirm what we already know – there was no collusion between my campaign and any foreign entity.”

Deputy Attorney General Rod Rosenstein appointed Mueller after a succession of jarring developments that brought to a boil questions over Russia’s alleged meddling in the election and possible collusion by the Trump campaign.

The Republican president decried the naming of a special counsel, by an official he himself appointed.

“With all of the illegal acts that took place in the Clinton campaign & Obama Administration, there was never a special counsel appointed!” Trump wrote in Twitter postings on Thursday morning. He did not offer any evidence of such acts in his reference to Democratic former President Barack Obama and former presidential candidate Hillary Clinton.

“This is the single greatest witch hunt of a politician in American history!” added Trump.

Democratic Senator Amy Klobuchar responded, “This is a truth hunt.”

Trump later told news anchors at the White House that Mueller’s appointment was a “very, very negative thing,” adding, “I believe it hurts our country terribly, because it shows we’re a divided, mixed-up, not-unified country.”

U.S. stocks recovered ground on Thursday as upbeat economic data emboldened investors to return to the market, a day after Wall Street saw the biggest selloff in eight months on worries the political turmoil could undermine Trump initiatives such as tax cuts that investors see as favoring economic growth.

Rosenstein, the No. 2 Justice Department official, named Mueller amid mounting pressure in Congress for an independent investigation beyond existing FBI and congressional probes into the Russia issue.

Rosenstein briefed US senators on Thursday, but made no public comments. Afterward, Republican Senator Lindsey Graham told reporters that “everything he said was that you need to treat this investigation as if it may be a criminal investigation.”

The White House initially said last week that a letter Rosenstein wrote accusing Comey of missteps as FBI director, including his handling of an election-year probe into Clinton’s use of a private email server while she was secretary of state, was what prompted Trump to fire Comey. Trump later said he had already decided to dismiss him and was thinking of “this Russia thing.”

Rosenstein told senators that he knew Comey would be fired before he wrote his letter, Democratic Senator Claire McCaskill said.

Russia has denied US intelligence agencies’ conclusion that it interfered in the election campaign to try to tilt the vote in Trump‘s favor. Trump has long bristled at the notion that Russia played any role in his November election victory.

A key issue Mueller may have to tackle is whether Trump has committed obstruction of justice, an offense that could be used in any effort in the Republican-led Congress to impeach him and remove him from office.

Trump cited displeasure with the FBI’s Russia probe as a factor in dismissing Comey. In addition, Comey wrote a memo detailing Trump‘s comments to him in February saying “I hope you can let this go,” referring to the Flynn probe, a source who saw the memo said on Tuesday.

Asked about the potential that there had been obstruction of justice, Republican House of Representatives Speaker Paul Ryan told reporters the special counsel will “follow the facts where ever they may lead” and that “it is premature to prejudge anything at this point.”

Flynn’s contacts with Russians during the campaign, as well as his work for the Turkish government, are under investigation. He was fired as national security adviser in February after it emerged he had misled Vice President Mike Pence about conversations with Russia’s ambassador to Washington in December.

Flynn and other Trump campaign advisers were in contact with Russian officials and others with Kremlin ties in at least 18 calls and emails during the last seven months of the presidential race, Reuters reported on Thursday.

The House Intelligence Committee requested more documents from the Justice Department and FBI related to its Russia probe and announced that former CIA Director John Brennan would testify in public before the panel on Tuesday to answer questions about Russian involvement in the election.

Turkey wants US envoy on IS removed over Kurdish policy

Nile Rodgers has led the tributes to Chris Cornell