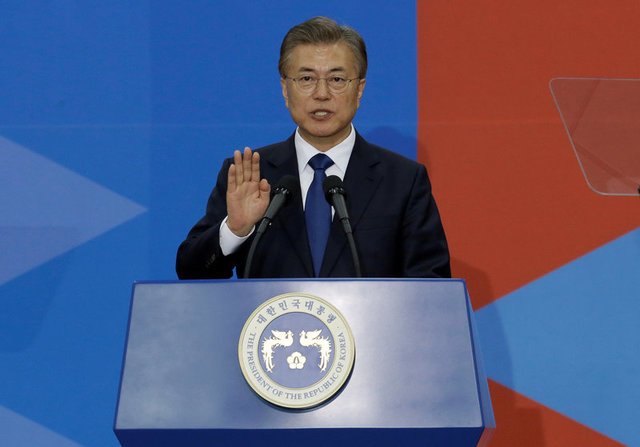 South Korean President Moon Jae-in, who took office last week, has campaigned on a more moderate approach towards the North

Trump has said “a major, major conflict” with North Korea is possible and all options are on the table but that he wanted to resolve the crisis diplomatically, possibly through the extended use of economic sanctions.

South Korean President Moon Jae-in, who took office last week, has campaigned on a more moderate approach towards the North but he has said it must change its attitude of insisting on arms development before dialogue can be possible.

“The fact that Trump said he will not have talks for the sake of talks reiterated our joint stance that we are open to dialogue but the right situation must be formed,” said Foreign Ministry spokesman Cho June-hyuck in a regular media briefing.

South Korea and the United States agreed during a visit to Seoul by Trump’s national security advisers this week to formulate a “bold and pragmatic” joint approach, Cho added.

The North has vowed to develop a missile mounted with a nuclear warhead that can strike the mainland United States, saying the programme is necessary to counter U.S. aggression.

The United States, which has 28,500 troops in South Korea to guard against the North Korean threat, has called on China to do more to rein in its neighbour.

North Korea conducted its latest ballistic missile test on Sunday in defiance of U.N. Security Council resolutions, saying it was a test of its capability to carry a “large-size heavy nuclear warhead”.

But a senior North Korean diplomat has said Pyongyang is also open to having talks with Washington under the right conditions.

Moon’s envoy to China, former prime minister Lee Hae-chan, left for Beijing on Thursday with a letter from Moon to deliver to China President Xi Jinping.

Before leaving, Lee said a summit between Xi and Moon could happen as soon as July on the sidelines of a Group of 20 meeting in Germany. A separate summit could also be held the following month, Lee said.

Moon has sent envoys to the United States, China, Japan and the European Union this week in what the government has called “pre-emptive diplomacy”. His envoy for Russia will leave next week.