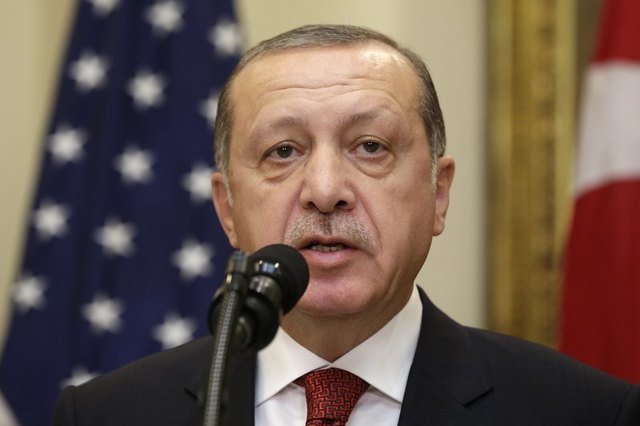 Turkey is ready to retaliate if it faces a threat from the Syrian Kurdish YPG militia and will not shirk from launching a military campaign if need be, President Tayyip Erdogan said on Thursday.

In his first public address since returning from a visit with US President Donald Trump, Erdogan said he told the United States that Ankara would “exercise its rights under the rules of engagement”, without consulting anyone, if it felt it needed to.

Turkey regards the YPG as an extension of the outlawed Kurdistan Workers Party (PKK), which is deemed a terrorist organisation by the United States, Turkey and the European Union. Washington sees the YPG as distinct from the PKK and as a valuable partner in the fight against Islamic State in Syria.

“We are facing a picture where terrorist organisations are constantly supported, strengthened and are confronting us. Turkey is not a country that will consent to such treatment,” Erdogan said in a speech to business leaders in Istanbul.

“With the Euphrates Shield operation we have carried out the first step to foil this plot. After this, we will not hesitate to carry out similar operations whenever we see necessary.”

Ankara launched its “Euphrates Shield” operation inside Syria last year, backing Syrian rebels with tanks, air strikes and special forces to sweep Islamic State from its southern border – and stop the advance of the YPG.

“If these terrorist organisations constitute a threat towards our country, we would do what is necessary by exercising our rights under the rules of engagement. We are telling you this now in advance,” Erdogan said.

“When we take this step, we don’t speak or consult with anyone as we don’t have any time to waste. We would just take the step.”

Erdogan said he told the United States that Turkey could not be part of the operation to retake the Syrian city of Raqqa from Islamic State because of the participation of the YPG.

His comments came hours after Ankara said the United States should dismiss its special envoy in the battle against Islamic State, citing his support for the Kurdish militia.

“Brett McGurk, the USA’s special envoy in the fight against Daesh (Islamic State), is definitely and clearly giving support to the PKK and YPG. It would be beneficial if this person is changed,” Foreign Minister Mevlut Cavusoglu told NTV television.

Cavusoglu said Trump had understood Turkey’s position, and did not challenge Erdogan when the Turkish president set out his possible response to the YPG.

Differences over Syria policy have caused friction with Washington, a Nato ally of Turkey’s. US officials said this month that the White House had approved supplying arms to the YPG, a decision that caused alarm in Ankara.

Adding to the tension, on Thursday US Senator John McCain called for the expulsion of Turkey’s US ambassador after violence erupted between protesters and Turkish security personnel during Erdogan’s visit.

“We should throw their ambassador the hell out of the United States of America … This kind of thing cannot go unresponded to diplomatically,” McCain, the head of the Senate Armed Services Committee, told MSNBC in an interview on Thursday, adding that legal action could also be pursued.

Turkey blamed the violence outside its ambassador’s residence on demonstrators linked to the PKK, but Washington’s police chief called it a “brutal attack” on peaceful protesters.

Police said 11 people were injured, including a Washington police officer, and two people were arrested for assault.

CoE session kicks off in Nicosia on Friday