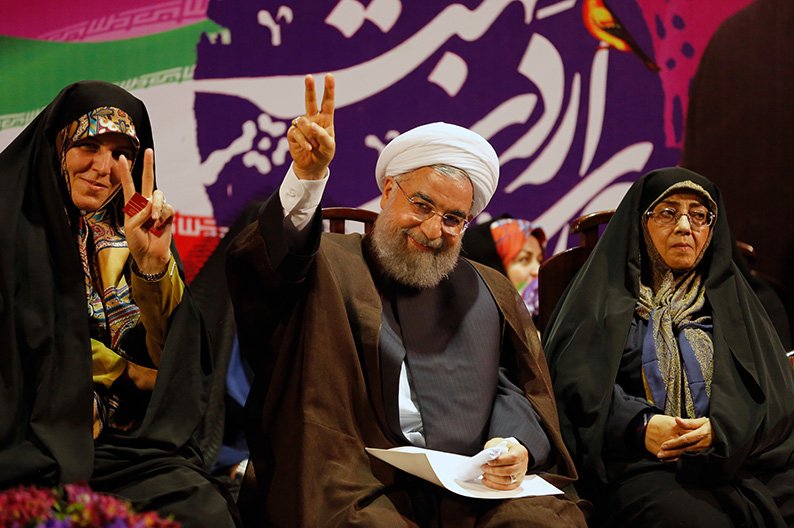 The six-week campaign is over, and 55 million Iranians will vote in the first round of the presidential election on Friday. Or rather, most of those 55 million people will vote, but many will not, because there is great disillusionment with President Hassan Rouhani’s promises to improve the economy – and therefore also with the international treaty on curbing Iran’s nuclear weapons ambitions that was supposed to bring back prosperity.

Donald Trump (who calls the treaty “one of the worst deals ever signed”) is not alone in seeing it as a failure. Although Rouhani’s main challenger in this election, hardline cleric Ebrahim Raisi, does not formally reject the deal, his whole campaign is focussed on the fact that the end of foreign economic sanctions did not bring Iranians the rapid economic relief that Rouhani had promised

Iran has a big, middle-income economy with a large industralised sector, but largely because of those sanctions it has been in the doldrums for the past decade. Incomes have stagnated or fallen, youth unemployment is 26 per cent, and many people have lost faith in Rouhani.

Forty-three per cent of Iranians “strongly approved” of the “Joint Comprehensive Plan of Action” (JCPOA), as the deal is called, when it was signed two years ago. Now only 21 per cent “strongly approve”. Yet nothing has actually changed with the deal. Rouhani’s problem is that nothing much has changed in the economy either.

The Western partners in the JCPOA, the so-called “Five plus One” (the United States, Russia, Britain, Germany, France and the European Union) have been slow to remove the sanctions, mainly because of foot-dragging in Washington – although the US government was quick enough to grant a waiver when Boeing wanted to sign a $16.6bn deal to sell 80 passenger aircraft to Iran Air last December.

The bigger problem for Iran is that major international banks have been reluctant to re-engage with Iran because they fear being caught out if the US reneges on the deal and reimposes sanctions. So the Iranian economy continues to bump along the bottom, and a lot of people who voted for Rouhani last time say they will sit this election out.

Ebrahim Raisi is capitalising on this disillusionment by running a populist campaign promising “work and dignity”. He is thought to have the tacit backing of Iran’s Supreme Leader, Ayatollah Ali Khamenei, who is the final authority in Iran’s peculiar blend of democracy and theocracy.

Khamenei has not given his public backing to any candidate in this election (there are also two less well-known candidates running for the presidency). It is generally assumed, however, that he supports Raisi, who is best known as one of the four Islamic judges who ordered the execution of thousands of political prisoners in 1988.

As a result, Raisi is doing well with his target audiences, the poor, the devout and the ill-educated. If they turn out to vote in large numbers, while more urban, more sophisticated voters express their disappointment with Rouhani’s failure to work miracles by staying home, it is entirely possible that he will beat Rouhani and become the next president.

This would plunge the country’s relations with the West back into the deep freeze, but Raisi says he doesn’t care about that: Iran doesn’t need outside help, and his goal is to restore the values of the 1979 Islamic Revolution. But it certainly wouldn’t improve Iran’s prospects for prosperity, or the entire region’s prospects for peace.

Rouhani is trapped between two fires in this election. At home he faces a conservative backlash that condemns his opening to the West and (implicitly) his nuclear deal. And on election day the voters who might come out to support him are likely to hear Donald Trump just across the Gulf in Saudi Arabia, spouting anti-Iranian rhetoric to a summit meeting of Arab countries.

It’s not just Trump. Hillary Clinton, while giving the nuclear deal her tepid approval, was just as negative about Iran in general, and Barack Obama regularly recited the misleading mantra about Iran being the “leading state sponsor of terrorism”. As did his predecessors in the US presidency all the way back to Ronald Reagan.

Iran is no worse than many of America’s allies in the region (and better than some) in its treatment of its own citizens. It is no more prone to interfering in its neighbours than they are. Yet it is routinely treated by US administrations of both parties as a rogue state that poses a huge and unique threat to the peace of the Middle East. Why?

Because it defied the United States and got away with it. The Iranian Revolution of 1979 overthrew Washington’s puppet ruler, the Shah of Iran, and just as in the case of Castro’s revolution in Cuba, the United States has never forgiven it for that crime. Whereas by now Iranians have more or less forgiven the US for the CIA-backed coup in 1953 that destroyed Iranian democracy and gave the Shah supreme power in the first place.

Kudos to the health minister for not backing down on Gesy