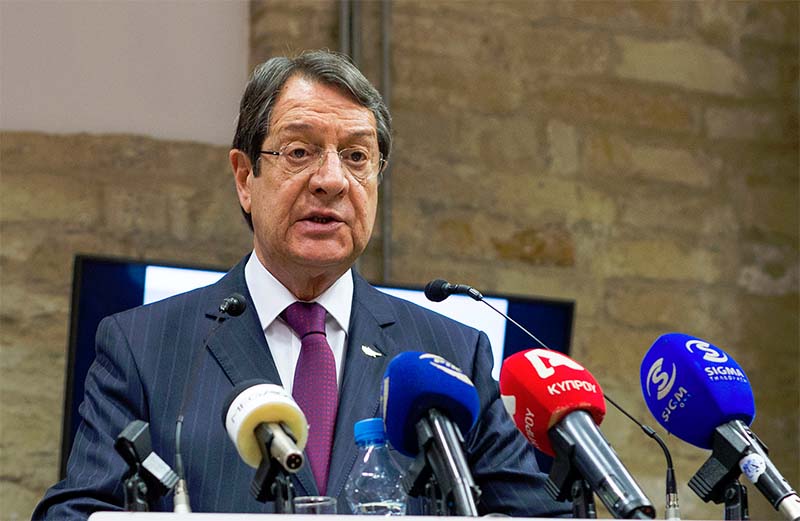 President Nicos Anastasiades met on Saturday King Abdullah II of Jordan in Amman where the two men agreed on a trilateral meeting with Greece in Nicosia in the autumn.

The president, who arrived in Jordan on Saturday to attend the World Economic Forum on the Middle East and North Africa to be held in Amman on Sunday, also held a number of meetings with heads of state.

According to deputy government spokesman Victoras Papadopoulos, the president met King Abdullah II in the afternoon where they agreed on top-level trilateral meeting with Greece in Nicosia in the autumn.

The meeting was “extremely important” Papadopoulos said, as the two countries’ relations are very good.

“Cooperation as regards the region and fighting terrorism but also in economic issues is such that the relations of the two countries have almost become brotherly,” he said. Cyprus, he added, is very important to Jordan as it acts as a mediator between it and the European Union to make Jordan’s and the Arab world’s positions understood by the EU.

In his welcome address to Anastasiades, the Jordanian King said that the relations of the two countries have entered a new era.

King Abdullah said that Cyprus’ voice within the EU on the challenges Jordan faces do not go unnoticed by his country.

During his meeting with the Egyptian Prime Minister Sherif Ismail, Anastasiades discussed the latest developments on the settlement talks, energy and other regional issues.

The two men exchanged views as to how to speed up the process of Egypt buying natural gas from Cyprus. “It is well known that Egypt wants to buy natural gas from plot 12 and Aphrodite (plot),” Papadopoulos said.

Anastasiades also met the Prime Minister of Jordan, Hani Al-Mulki, and discussed with him energy, bilateral relations and regional affairs.

Earlier in the day, the president had the opportunity to explain his proposal aiming at returning to Geneva for the settlement talks to the EU High Representative of the European Union for Foreign Affairs and Security Policy Federica Mogherini.

The president, Papadopoulos said, found complete understanding as to his proposal for the talks from his interlocutors.

Anastasiades submitted his proposal on Wednesday during a meeting with Turkish Cypriot leader Mustafa Akinci. He had said that the Greek Cypriot side had submitted a concrete, creative proposal that could really create the preconditions for a Cyprus settlement. If this proposal were to be accepted by the Turkish Cypriot leader, he said, then a solution could be reached before the presidential elections expected to be held in February 2018. The President said that he would explain his proposal to the people on Monday.

Anastasiades is to also meet later on Saturday with the King of Spain.

On Sunday, the president will participate in a roundtable discussion with the President of Egypt, the President of Palestine, the Prime Minister of Georgia, the EU High Commissioner for Foreign Affairs and Security Policy, and others.

Anastasiades is expected to return to Cyprus on Sunday.

Under fire at home, Trump wins warm welcome in Saudi