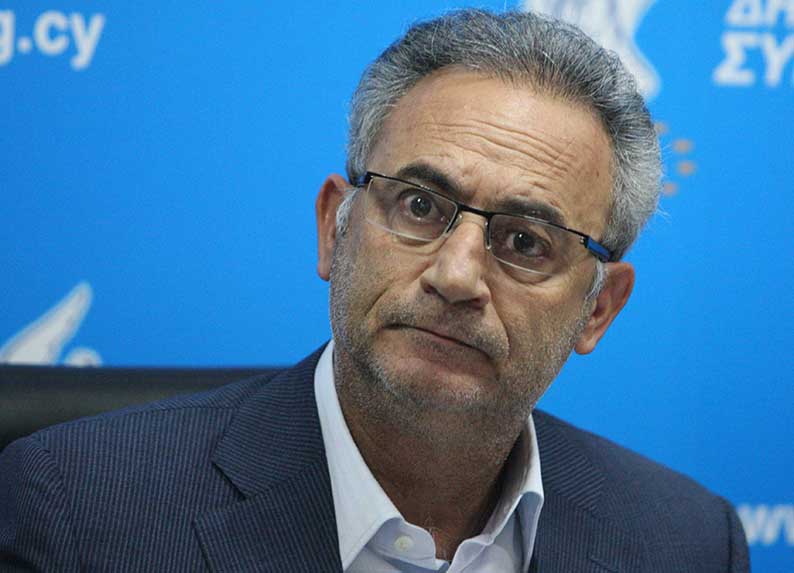 Disy leader Averof Neophytou said that foreign officials had Cyprus fatigue and were laughing at the notion of two states.

Funnily enough, the president did not take the trouble to answer the question he posed as he usually does. But I can answer it for him here. Everyone who served as a president, including him, has used the presidential chair for exactly the same reason – to sit on it. And Anastasiades knows very well what it means to sit there, and if the unbridled passion to sit on it is anything to go by, it must be the best chair in the world.

The president’s question contains a glaring contradiction. His country is not in danger of being partitioned. It has been partitioned for 43 years; 53 if we take 1964 as our starting point. Why does Anastasiades need the chair given that his country is already partitioned? Why has he started his campaign for re-election that enables him to sit on the chair of his partitioned country, since he takes no pleasure from it?

Logically, he should have announced that he was not interested in re-election exactly because he did not want the presidential chair of his partitioned country. It is also interesting that the president was speaking in the future tense – “if my country is to be partitioned”. Either he does not know the language well or he has not noticed that Cyprus has been partitioned for 43 years now, or he thinks he is taking us all for a ride.

I would rule out the first two explanations, which leads me to conclude that he thinks he is fooling all of us. I recently gave some examples of this behaviour and here is another one. I refer to the notorious issue of the ‘four freedoms’ which Anastasiades has turned into his main weapon in his attempt to escape the peace process.

Disy chief Averof Neophytou recently explained the issue with extreme clarity. Of the four freedoms included in article 6 of the Maastricht Treaty (free movement of people, goods, services and capital) the last three were covered by Turkey’s customs union with the EU and were therefore not an issue. Any reference to them is plainly stupid.

The matter of the movement of people had been addressed by the Annan plan (Article 3) in the best possible way under the circumstances. For a transitional period of 19 years (or until Turkey joins the EU), the number of Greek nationals that would have the right to live and work in Cyprus was restricted to 5 per cent of the Greek Cypriot population and the number of Turkish nationals to 5 per cent of the Turkish Cypriot population. This in effect is the Turkish demand today, as has been clearly set out by Mustafa Akinci.

Based on the agreement for the maintenance of the population ratio between the two communities, which Anastasiades was celebrating as a major achievement until recently, we are talking about 40,000 Greek nationals and 10,000 Turkish nationals. In reality, taking into account the presence of some 20,000 Greek nationals today, there would be a maximum of 5,000 Turks.

This is what Anastasiades is now making all the fuss about. By blatantly lying, he is trying to terrify citizens (including teenage students) by claiming Cyprus would be flooded with 75 million Turks. This calculated fabrication is aimed at destroying any possibility of reaching an agreement.

The president should answer the following question: will these five or 10 thousand Turks that would have the right to live and work here as part of the ‘four freedoms’ be such a big problem that it justifies not agreeing on a settlement, leaving Famagusta and Morphou to the Turks and keeping the Turkish army in Cyprus forever? Without a settlement, one million Turks could arrive in the north. Does that not bother the president?

So, Mr President, put aside the hypocrisy. Cyprus will stay forever partitioned (if it does not become a province of Turkey one day) and you will take a large share of the blame for it. And as you supposedly do not want the presidential chair of a partitioned country, why are you so single-mindedly pursuing the right to keep sitting on it?

Presidents who make promises should keep them