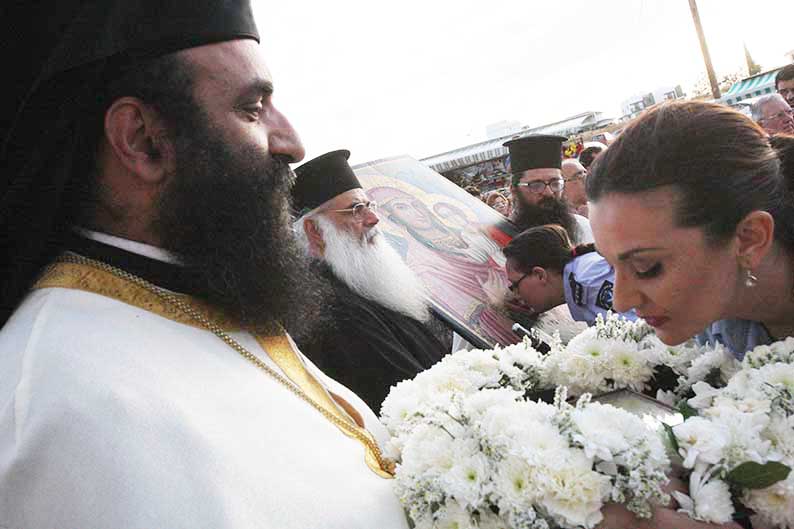 The Greek Orthodox Church is a relic loving faith so it’s no surprise that the arrival this week of a fragment of what is purported to be the robe of the Virgin Mary was greeted by a large crowd and a police band.

But what is supposed to be one of the most sacred relics of Christianity, the Timia Esthita, or the robe of the Virgin Mary, has inevitably been dismissed as little more than a money-making scam preying on the gullibility of believers.

The welcoming ceremony for this tiny piece of cloth – the complete dress is in a museum in Georgia – took place on Thursday when it was escorted by around 100 Dhali parishioners along with the 19th century icon of Virgin Mary of Dadia to the Church of Constantinos and Eleni. They will be on display until May 23.

According to the church’s priest, Father Marios Kallenos, the relic and the icon – which is believed to be miraculous – arrived from the monastery of Dadia in Evros, Greece. The cloth fragment was donated to the monastery by the Patriarch of Georgia a few years ago.

The dress of the Virgin was reportedly found in 473 AD and bought from a Jewish man in the Holy Land. It is kept at the state museum in Zugdidi, Georgia.

“The robe itself has been kept in Georgia since the Fall of Constantinople (1453). It is guarded like the apple of their eyes, it is not easy to leave the museum,” Father Marios told the Sunday Mail. He added that the fragment currently in Cyprus was probably among pieces detached from the main dress due to wear and tear, as the garment is more than 2,000 years old.

The priest could not estimate how many people would visit the church to see and worship the relic.

“What’s important to us is for people to come and worship the cloth and the icon of Virgin Mary of Dadia. It is a joy and blessing to have them in our church,” he said. Theologian Theodoros Kyriacou believes that thousands will flock to the church as this is its first time in Cyprus.

In such cases, he says, faith overcomes doubt, as it is nothing more than faith that drives believers to rush to worship relics and items believed to be holy.

“No one can say 100 per cent that these relics are genuine. In the Middle Ages, ten skulls of Saint Vasilios were circulating as if he was the Lernaean Hydra,” Kyriacou told the Sunday Mail.

Some relics, especially those related to modern day saints could be genuine, but in general he said it is pure faith that drives belief in their provenance.

“In times of crises, as we are in now, there is greater tendency of turning to the sacred for help. When people feel like they have nowhere to turn to, they are more inclined to worship the relics of a saint asking for help,” he said.

But it’s a phenomenon not only observed in Cyprus, he argues. “When the Holy Girdle of Virgin Mary – also known as the Girdle of Thomas – was taken to Russia, people waited as long as 24 hours to see and worship it.”

And just last Sunday, thousands rushed to see the remains of Saint Eleni that arrived in Athens from Venice along with a piece of the Holy Cross. The relics were received with the full pomp and circumstance shown to a head of state by the archbishop of Athens and the Greek president. Greek Defence Minister Panos Kammenos attended their reception at the airport.

But faith is exactly what many will count on when trying to exploit believers into paying money to see holy relics. The exhibition of such relics in churches are free of charge but believers will fork out cash to buy candles at the church or donate to the collection box.

“There is always exploitation in such matters. For example, a bishop in Cyprus wanted to bring the relics of Ayia Eleni. Why now and not before?” Kyriacou asked, implying that the bishop wanted to take advantage of the excitement its arrival caused in Greece. He agreed that bringing icons, relics and holy items to Cyprus gives a great monetary boost to churches, but it also does service to the believers as not many have the opportunity to travel abroad and worship these relics.

The Sunday Mail has learned that a percentage of the money a church receives from believers goes to the bishopric which it belongs to.

For sociologist and sceptic Antonios Alexopoulos most people do not even question what they are told as regards religion.

The church, he said, practises what he describes as “religious bullying”.

People need to believe in the sacred, he said. “It is a primitive need, it exists within us. We still have not overcome the need to worship totems, we need to believe to a superior being, a deity,” Alexopoulos said.

Religious institutions will use this, he said, as a most successful marketing tool.

“They present something they believe will bring them money, and they take it from church to church. It was reported that the relic of a saint exhibited recently in Greece made the church that hosted it tens of thousands of euros,” he said.

Exploitation of saints for money is not uncommon. In Cyprus, there are endless advertisements on TV and in the press selling icons and other items that allegedly have holy qualities because of their connection to a specific saint.

Among the most exploited is Saint Paisios, a monk of Mount Athos who died in 1994 and who was canonised two years ago. Elder Paisios was believed to have had the gift of seeing the future. His predictions are widely discussed, as he predicted that a war between Turkey and Russia would lead to Turkey’s demise and the mass conversion of Turks to Orthodox Christianity.

A couple of months after Paisios was canonised, a Cypriot priest put a pair of plastic slippers up for worship, claiming they belonged to the saint. It is not known if this was an attempt to exploit believers or a genuine belief that those slippers had holy qualities. But it was too much even for the Cyprus Church. The Limassol bishopric ordered him to remove the slippers.

Presidents who make promises should keep them