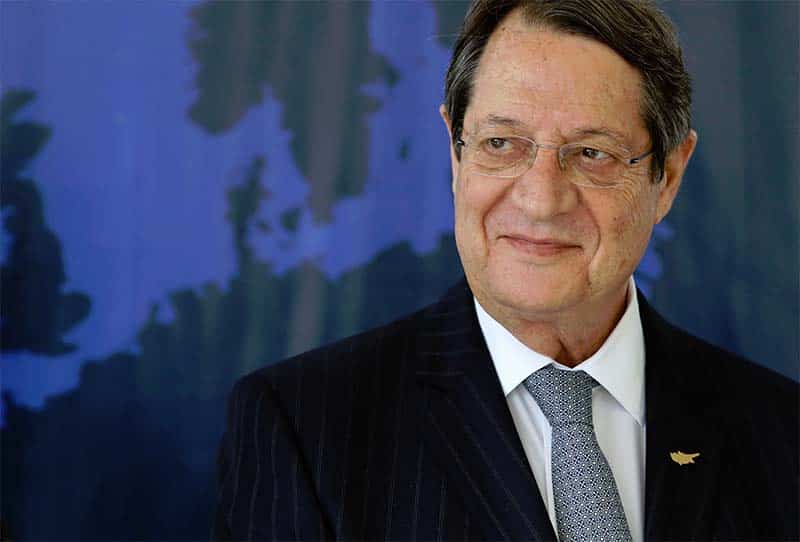 Speaking to the 127th Session of the Committee of Ministers of the Council of Europe on Friday President Anastasiades told participants that the Cyprus talks had reached “a critical juncture”, as “discussions are under way for the next steps forward.”

He explained: “Within this context, I have put forward a creative proposal as to the methodology we could adopt that would allow us to finally break the current impasse, bridge the differences, and establish the parameters, through a sequential approach to constructive negotiations to reach a comprehensive settlement on the Cyprus problem.”

A couple of days earlier, after his five hour meeting with Mustafa Akinci and Espen Barth Eide, he described his proposal as “daring.” The reality was that his proposal, which was neither “creative” nor “daring”, was just new packaging for his greater scheme of the last few months – quitting the talks without taking any responsibility for the collapse of the process.

This has been his sole objective since the end of the Geneva conference in January, packaged and sold in a variety of ways, so it is almost impossible to take his concern about the impasse seriously. On the contrary, his creative proposal seems more likely to cement the impasse by setting a new, pointless condition for attending a Geneva conference, a condition he knows the Turks would not accept.

Anastasiades’ “daring” methodology, which he portentously described as “a sequential approach to constructive negotiations” envisaged him dictating the order in which the different chapters would be discussed in a Geneva conference. The two sides would first have to discuss and agree the chapters on territory and security/guarantees and then move on to the other four chapters – property, governance, EU, economy – that he and Akinci had been discussing for the last two years without reaching agreement.

Presumably, if they agreed on security and territory but failed to agree on the four chapters, they could then return to Cyprus and negotiate inconclusively until the presidential elections, which has been Anastasiades’ objective all along. Akinci’s proposal is the sensible one – he suggested that everything would be on the table in Geneva and the two sides could be discussing all chapters in parallel as they were inter-linked; concessions in one chapter could secure gains in another and so forth.

This approach is too rational for Anastasiades especially as it would have a chance of being successful, assuming the president was remotely interested in striking a deal. But he is not, which is why he came up with “sequential approach” insisting that the chapters on which the Turks were expected to make some concessions – territory and security – were discussed first (Nicholas Papadopoulos had been urging the president to do this for some time now, and nobody could accuse him of wanting the process to succeed).

His reasoning is obvious, bearing in mind his ongoing efforts to end the process without taking responsibility for it. The likelihood is that the Turkish Cypriots would not agree to his proposed methodology and he could simplistically claim that the Geneva conference did not take place because the Turks rejected his proposal. In the unlikely event that Akinci agreed to his methodology he would have the opportunity to storm out of a Geneva conference accusing the Turkish side of being unreasonable on territory and security, to Greek Cypriot applause for his patriotic stance.

Is it possible for the president to act so deviously and engage in all this theatre to derail the peace process? The answer is an emphatic yes, as he has done little else in the last few months, other than poison the talks’ climate with his negative rhetoric, misinformation and feet-dragging. During this time, his government spokesman engaged in an unrelenting demonising of Akinci in the media and the president calculatingly misinformed the public about the four freedoms and UN arbitration. The two also mounted an all-out attack on Eide, accusing him of promoting the Turkish side’s positions, another blatant lie easy to sell to Greek Cypriots.

Do we need to mention Anastasiades’ duplicity regarding the Disy law aimed at revoking the enosis referendum law? He helped draft it and then referred it to the Supreme Court in the hope that Akinci would walk out of the talks as he had done in February.

We do not need to mention all this. The sad truth is that if the president was committed to the peace process and sincerely interested in a settlement he would have jumped at the opportunity to go to Geneva and engage in negotiations on all chapters with Turkey present. Were direct talks with Turkey not what our politicians had always demanded, arguing that the “key to a settlement is in Ankara”? Now we have the offer to negotiate the withdrawal of troops, the end of Turkish guarantees, the return of territory with Turkey, Anastasiades is using pathetic excuses about the procedure at the conference to turn it down.

This is hardly surprising, given the that the president’s commitment to a settlement was nothing more than well-executed theatre.

Tales from the Coffeeshop: What else does Junior want?