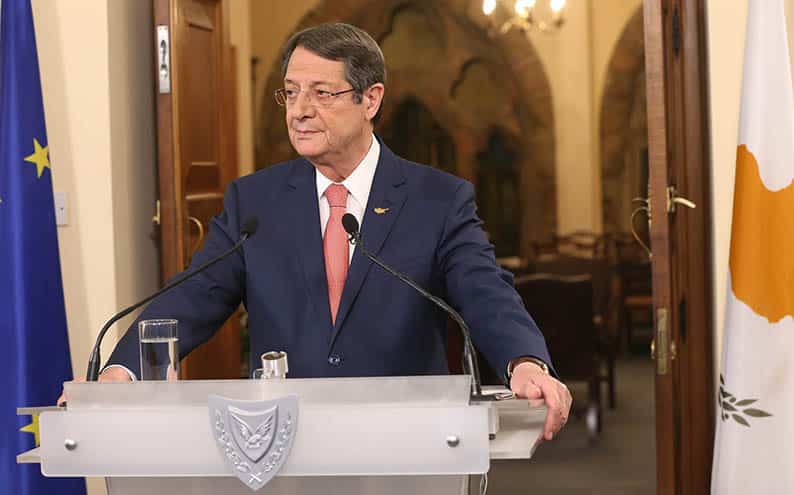 President Nicos Anastasiades confirmed on Monday that he had proposed that any conference on Cyprus should focus on security and guarantees first, and only if these were agreed would the remaining issues be discussed.

In his address to the people on the proposal he had made last week to Turkish Cypriot leader Mustafa Akinci at the negotiation table, the president said that his aim was not to engage in a blame game nor to comment on what was being attributed to him from both sides of the divide.

After giving a brief account of what has taken place so far in this round of talks, Anastasiades said that during their last meeting on Wednesday, Akinci, citing the lack of progress in the talks, had proposed for a new conference in Geneva where the two sides would each present their main goals in an attempt to make progress through a ‘give and take’ procedure.

At the same time, the president said, Akinci had demanded that the Republic halt its energy plans.

“Feeling how critical the moments are, and with the sole aim of preventing a protracted stalemate, and having rejected the claim for suspending our energy plans and perfectly consistent with what was agreed on January 12 in Geneva and on February 1 in Cyprus, I proposed an immediate transition to Geneva in order to have tangible results,” Anastasiades said.

He added that his counterproposal was to first, “convene the Conference on Cyprus to conclude and end the debate on the issues of security and guarantee, and secondly, if and when we reach an agreement, to proceed immediately to the discussion and resolution of the issue of territory”.

The third step, he said, would be to remain in Geneva “for as long as it is necessary to achieve not only substantial progress, but even a comprehensive solution to the Cyprus problem”.

The president said that he has been consistent in terms of everything that had been agreed so far with Akinci.

“My goal is to restore the truth to a proposal, the adoption of which will create valid prospects so we can look optimistically to a positive outcome as soon as possible,” he said.

Despite the progress made in the five chapters of governance, economy, property, European Union, and territory, there are disagreements or even backtracking on what had been agreed, he said.

Defending his proposal against claims from the Turkish Cypriot side, “but unfortunately also by circles within the Greek Cypriot community” that it focused on procedural issues, he said it was perfectly consistent with what had been agreed with the Turkish Cypriot leader, as recorded in the United Nations Communiqués of December 1, 2016, January 12, 2017 and February 1, 2017.

His aim, he said, was not to simply achieve progress, but to create conditions that would allow the discussion of those issues to reach results.

Following his address, the president answered to questions of members of the press.

Responding to a question, Anastasiades said that he will not accept procedures that led nowhere.

This, he said, would be the result of the “obsession to go to a conference in June without being ready, and reach a dead-end at the give and take procedure”.

The Conference on Cyprus, launched in Geneva in January to discuss security and guarantees, ended without a deal but with a decision on January 12 to continue discussions at a technical level, before re-convening at a political level again. The two leaders asked the UN on February 1 to prepare the ground for the continuation of the conference on Cyprus at political level with the participation of the guarantor powers, Greece, Turkey and the UK.

The president had said last week that, if his proposal is accepted by the Turkish Cypriot leader, a solution could be found before the presidential elections in February. The proposal has been deemed a list of “unacceptable preconditions” by the Turkish side.

The two leaders failed to agree to a way forward in their meeting last Wednesday which led to UN Special Adviser Espen Barth Eide into a bout of shuttle diplomacy in the hopes of arranging a new more substantial leaders’ meeting.

As UN Secretary-General Antonio Guterres was telling reporters in Strasbourg that the UN was ready to convene a new conference in Geneva if the two sides thought that would be a positive step, the leaders left a crunch five-hour meeting that produced no clear direction.

The meeting was the last of four since talks resumed after stalling for two months in mid-February, and was to supposed to determine the way ahead.