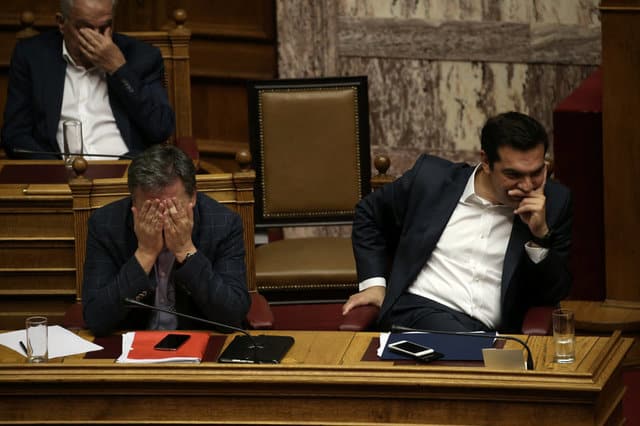 Euro zone finance ministers and the International Monetary Fund will seek a deal on Monday on Greek debt relief that balances the IMF’s demand for a clear “when and how” with Germany’s preference for “only if necessary” and “details later”.

Without the deal, no new loans can be disbursed to Athens, even though the bailout is now handled only by euro zone governments, and Greece needs new credit to repay some 7.3 billion euros worth of maturing loans in July.

Without the loans, Athens is likely to default – a bad start for a country that wants to return to market financing next year when its latest bailout, the third since 2010, ends in mid-2018.

For its part, Greece has done what it could to secure a deal. It has agreed, albeit after months of negotiations, with the euro zone lenders and the IMF on pensions and tax reforms.

Euro zone officials say a report prepared by experts on whether Greece has implemented what is called “prior actions” – laws that have to be passed to make the reforms stick – is positive. That means only a deal on debt relief between the IMF and the euro zone now stands between Athens and new loans.

But an agreement is far from simple.

“The chances of a deal are 50-50. We have done pretty good preparations, I can express a hope there will be an agreement, but it is an assumption, not a forecast,” a senior EU official involved with the preparations said.

A group of north European countries led by Germany wants the IMF to join for credibility reasons, believing the European Commission’s approach towards Athens can be too lenient.

The same countries, however, oppose a firm commitment of debt relief for Greece, fearing the disapproval of bailout-weary voters at home. They are also concerned that once Athens gets a debt deal, it would lose the incentive to continue reforms.

The discussion therefore focuses on how to make a euro zone statement on Greek debt relief from a year ago, more detailed and more concrete.

“The IMF wants maximum (debt relief) commitment upfront, while others would prefer to be more precise only in 2018,” a senior euro zone official said, referring to the end of the third bailout in mid-2018, by which time lenders would have a full view of Greek reform completion and the latest economic data.

If there is a debt deal, Athens has tentative plans for a return to bond markets as early as July.

The debt relief discussion is based on a promise made by the Eurogroup in May 2016 to extend the maturities and grace periods on Greek loans so that Greek gross financing needs are below 15 percent of GDP after 2018 for the medium term, and below 20 percent of GDP later.

The Eurogroup also said it could consider replacing more costly IMF loans to Greece with cheaper euro zone credit and transfer the profits made from a portfolio of Greek bonds bought by euro zone national central banks back to Athens.

All that could happen only if Greece delivers on its reforms by mid-2018 and only if an analysis shows Athens needs the debt relief to make its debt sustainable.

The IMF believes that debt relief, or at least a clear promise of it now, is needed to restore investor confidence in Greece, especially if the country, which has public debt of 197 percent of GDP, is to return to market financing next year.

Greek debt to GDP has actually risen during the various bailout periods, primarily as a result of sinking GDP brought on at least in part by the austerity demanded by lenders.

Anastasiades to reveal details of proposal