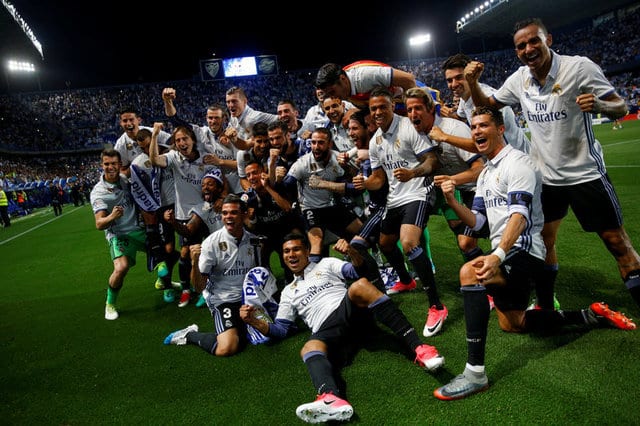 Real Madrid ended a five-year wait to win La Liga on Sunday as Cristiano Ronaldo and Karim Benzema secured a 2-0 win at Malaga which clinched a 33rd league triumph.

Barcelona fought back from two goals down to beat Eibar 4-2 but the result could not stop Real from lifting the trophy.

‎Zinedine Zidane’s men only needed a draw to wrap up the title in their final game of the season and raced into the lead when Ronaldo latched onto a through ball from Isco to round Carlos Kameni. That goal ensured Real scored in every league game this season.

Malaga had nothing to play for but made a fist of the game and it took a fine save from Keylor Navas to prevent former Barca player Sandro Ramirez levelling from a freekick later in the first half and the striker also came close from a header.

Real also wasted chances to stretch their lead before Benzema bundled the ball in on the rebound in the 55th minute after Kameni had saved from Sergio Ramos following a corner.

“Just as throughout the season we did it in the end with hard work and by fighting,” Zidane told reporters.

“With the type of squad we have we only have to think about working, it’s been a very hard fought league win, difficult at some moments, but after 38 games there’s no better feeling than being at the top.”

There was a brief moment of concern when Ronaldo needed treatment after falling awkwardly from a challenge but the Portuguese, who scored for the fifth time in three league games, was able to finish the game, easing Madrid’s anxieties before the Champions League final against Juventus on June 3.

The result secured Real a sixth straight league win since going down 3-2 to Barca in April.

Barca fell two goals behind in their final game of the season against Eibar as Japanese forward Takashi Inui scored either side of the break with two thumping finishes in off the crossbar although the Catalans fought back to win 4-2 with the help of a double from the league’s top scorer Lionel Messi.

“The game was a demonstration of what the team has been like in the last few years. We never give up, although we couldn’t finish the year how we wanted to,” said Barca coach Luis Enrique.

“We weren’t consistent enough throughout the season, especially in home games, and in the end we’ve paid for that.”

The Catalans had missed a slew of chances before then and had a goal ruled out but they got a lucky break when Eibar defender David Junca inadvertently sent a loose ball into his own net after Neymar had hit the post.

Luis Suarez knocked in the equaliser in the 73rd minute after Messi had missed a penalty although the Argentine compensated by converting a second spotkick in the 75th and then rounded off the scoring in injury time.

Messi finished the season as top scorer in the league with 37 strikes, ahead of Suarez on 29 and Ronaldo on 25.

Also on Sunday Atletico Madrid said farewell to their beloved Vicente Calderon stadium in the most fitting manner with a 3-1 win over Athletic Bilbao thanks to a double by homegrown hero Fernando Torres on Sunday before they move to a new ground.

Atletico finished third with 78 points while Athletic missed out on sixth and a qualifying round spot in next season’s Europa League to Basque rivals Real Sociedad, who snatched a 2-2 draw at Celta Vigo with an added time leveller from striker Juanmi.

Athletic are seventh but can still earn a place in the Europa League if Barcelona win the King’s Cup.

Upsurge in calls to police hotline in first three months

Trump to visit Israel in search of revived peace process