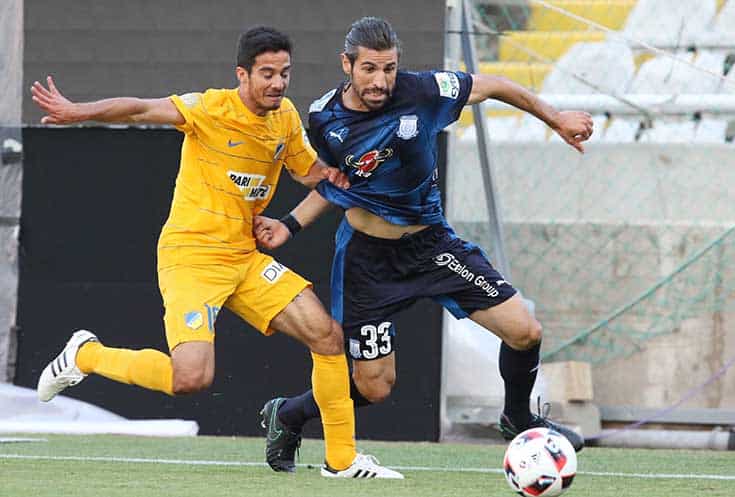 In last Saturday’s dress rehearsal, on the final day of the league campaign, the two sides shared a point in a 2-2 draw

The two sides have shared the last four Cypriot Cups between them and are now seeking to claim the last available piece of silverware of the campaign. Apoel are looking to seal the league and cup double while Apollon are out to retain the trophy they won last season.

Apoel boss Thomas Christiansen has just one injury concern going into the final. Dutch midfielder Lorenzo Ebecilio will miss out but the rest of the squad is at the disposal of the manager.

Apollon manager Sofronis Avgousti has slightly more to worry about, with Tiago Gomes, Constantinos Makrides and Sérgio Semedo looking to be losing the race against time to be fit for the final.

However, Charalambos Kyriakou, Giorgos Vasileiou and Marios Stylianou have stepped up their training regime in recent days, increasing their chances of being available for the showdown.

Apoel manager Christiansen spoke ahead of the encounter: “It is an important day for Apoel and Apollon, it is a chance for us to win the double at the end of such a great season”.

The Dane, whose future still hangs in the balance, says his side “deserve a good end to the campaign” and that he aims to “make everybody happy” by winning the cup.

While the future of Christiansen remains unresolved, there is no such issue in the Apollon camp with Avgousti recently having been rewarded with a contract extension.

The former goalkeeper of the club is hoping for the perfect end to the season: “We want to end the year in the best way. We must be prepared, we want it a lot. My players are ready, they have shown that they are more than capable”.

Also, speaking during Tuesday’s pre-game press conference were the club captains of each side.

Apoel’s Nektarios Alexandrou hoped for a good match both on and off the field: “We have said that we want a day of good sportsmanship. As footballers we must keep the standard high. We await an excellent final and may the best team win”.

Fotis Papoulis, Apollon’s talisman, says his team-mates “have shown that we fight for all of our targets” and that they are “all more than ready for the second consecutive final”.

In last Saturday’s dress rehearsal, on the final day of the league campaign, the two sides shared a point in a 2-2 draw, where Apollon looked to have scored the winner with four minutes from time only for Igor de Camargo to grab a 90th minute equaliser. However neither side fielded their first team.

This season, Apollon have had the better of the battles, winning both home matches against Apoel and drawing twice away.

The two sides share some recent history in the cup too: Apollon defeated Apoel in the 2010 final by a score of 2-1, and also knocked out the Nicosia club at the semi-final stage last season en route to winning the trophy.

While the Limassol side hold recent bragging rights, Apoel are far and away the most successful club in the tournament’s history, with 21 titles to their name, while Apollon have won it eight times.

A packed GSP stadium is expected for the big game that will kick off at an earlier than usual 6.30pm local time.