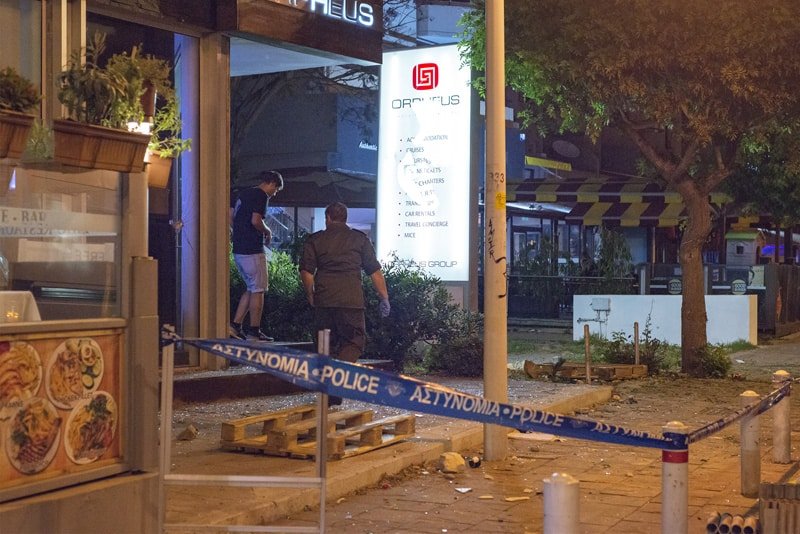 All six men police were on the hunt for in relation to the fracas which took place in Limassol between AEL and Apollon football fans were arrested by Wednesday midday, police confirmed.

All six were interrogated by Limassol police which has not ruled out more arrests.

On Tuesday night, stones, Molotov cocktails and flares were thrown, garbage bins and traffic lights were set on fire and shop windows were smashed during clashes between AEL and Apollon fans at Enaerios area in Limassol, ahead of Wednesday’s cup final between Apollon and Apoel at the GSP in Nicosia.

One 19-year-old at the scene was treated at a private clinic after his left leg was injured by a firework. Three more people, aged 18, 19 and 24 received first aid at Limassol general hospital and were later allowed to go.

According to police, the fracas began at 8:45pm on Tuesday night when a group of Apollon fans were heading down 28th of October street.

At the Enaerios traffic lights, AEL fans had stood by waiting for them and when the two groups came face to face with each other, they began to throw fireworks, flares and Molotov cocktails to the opposing fans.

“AEL fans with hooded faces, who were hidden in bushes, behind the shops, moved towards the Apollon followers, and there was a fight,” Limassol CID chief Ioannis Soteriades said.

The riot squad and Police Rapid Response Unit (MMAD) were deployed to the scene and had to use tear gas to separate the fighting groups, he added but managed to restore calm in the area, preventing the worst.

According to police, once forces began to leave Enaerios, they were informed of more riots at the Apollon fan club near the new port traffic lights where there were fires and flares being thrown around.

Arriving at the scene, Apollon fans attacked members of the force throwing stones, fireworks and flares in their direction and then running off to escape.

Four police cars were damaged although the extent is not yet known.

Police spokesman Andreas Angelides was quoted on Cybc as saying this was insulting behaviour to society which police would not tolerate, adding three crisis centers were being set up for Wednesday’s cup final between Apollon and Apoel.

By the end of the day, the deputy police chief will hold a meeting with all police units including the riot squad and MMAD on how to combat such problems, he added.

Asked by journalists to comment, Justice Minister Ionas Nicolaou said questions should be directed to the police spokesman however he did not refrain from responding to earlier remarks made by Disy MP Efthimios Diplaros who according to the Cyprus News Agency, said some members of the police force should stay home.

This is not a matter in which “Mr. Diplaros should be commenting on, rather, something police should be investigating.”

Since 2014, when a bill on tackling football violence was passed, courts have been imposing tougher sentences, Nicolaou added but raised the issue of the football fan identity cards.

The Cyprus Football Association refused to take responsibility for implementing them, he said, and as it has fallen in the hands of the Cyprus Sports Organisation, the ministry is no longer responsible for the procedure, he said.

After several delays and appeals surrounding the tender procedure, the auditor general is now closely involved in the process, Nicolaou added.

During the riots a car was driving at high speed towards the club seriously injuring one person.

A day full of learning on Saturday for all

Eide hopes for Geneva formula by end of week (Update 3)