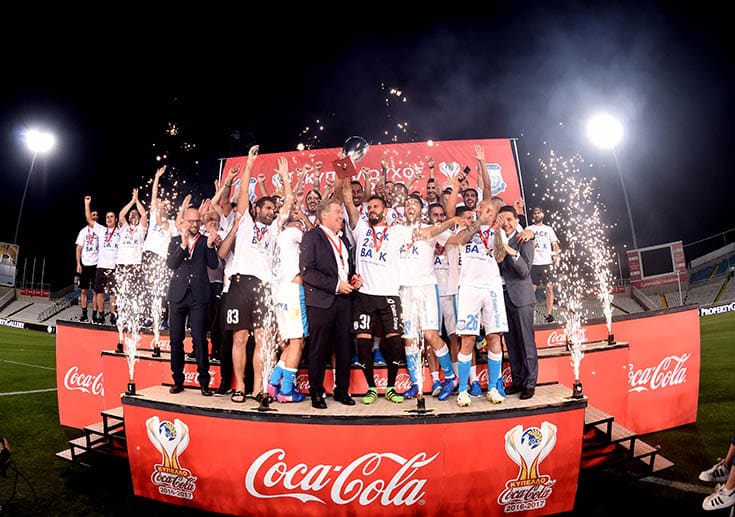 Apollon players celebrate winning the Cyprus Cup after the game

Apollon claimed the Cyprus Cup on Wednesday with a 1-0 win over champions Apoel, retaining the trophy they earned last year.

In the headlines last week was Apoel’s Brazilian midfielder Vinicius after signing a contract extension until 2019, but it was his namesake on the other side who would prove to be the protagonist of Wednesday’s showdown.

In the very first big chance of the game, Apollon defender Paulo Vinicius showed a glimpse of the threat he would be throughout the 90 minutes with a shot on the turn which edged just wide of the post via a deflection.

Pieros Sotiriou, playing his last game for the champions after agreeing a move to Copenhagen, was hoping to bow out in style but his goal-bound effort was stopped on the line by Roberge. Whether by luck or design, Giorgos Efrem then hit the woodwork directly from a corner.

Despite neither side really dominating the game, Apollon just about edged it in terms of efforts on goal, as captain Fotis Papoulis went close with a long-range strike. Paulo Vinicius came mightily close once again midway through the half when his header from Da Silva’s cross whistled past the post.

The latter part of the opening period was marred by niggly fouls which hampered the vibrant start to the game.

And that tension boiled over at the start of the second when Da Silva, already booked for a foul earlier in the game, hacked down Giannis Gianniotas and was thus shown a red card, leaving his side down to ten men with half an hour of normal time to play.

Sotiriou was not having the send-off he had envisioned, as he missed a gilt-edged chance at the start of the second period, before a header one-on-one with the keeper did not have the power to go beyond keeper Bruno Vale.

Those misses were about to prove increasingly costly, as the deadlock would finally be broken with just eleven minutes to play.

Joao Pedro swung in a tempting ball to the far post and, after starring at both ends of the field in the first-half, Vinicius was there to fire in the deciding goal. Though within Urko Pardo’s reach, the keeper was beaten by the immense power on the header, sending the Apollon section into raptures.

After a small interruption to the game due to the over-excitement from the Apollon fans, Apoel very nearly hit back with an instant response. A lofted ball up field was flicked on by Sotiriou to substitute Bertoglio but the Argentine’s effort went just wide of the post.

Apoel, though usually so dominant on all fronts, simply could not muster a clear chance in the final stages, as any attempt in and around the opposing penalty area was snuffed out by a disciplined Apollon backline.

The previous four meetings between the sides this season ended in two wins and two draws for the Limassol club, and there would be no more joy for Apoel in the fifth, as Apollon held on to claim their ninth Cyprus Cup in their history, and their third in the last five seasons.

A story of betrayal: kidnapped Marie’s family speaks out