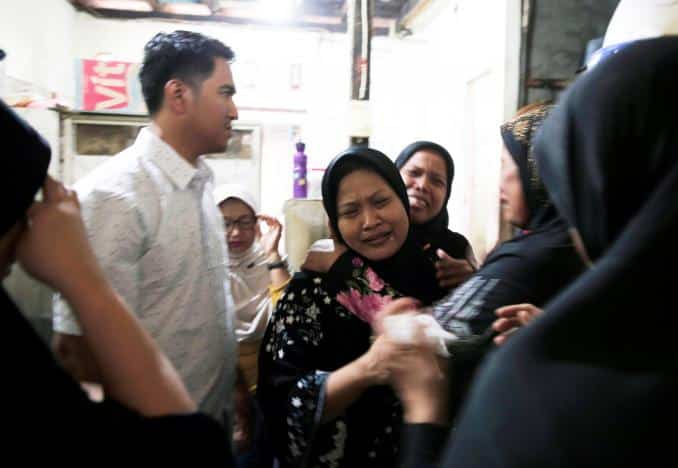 The mother (C) of Indonesia policeman Imam Gilang Adinata, a victim of a bomb blast at Kampung Melayu bus station, mourns near his coffin in Jakarta, Indonesia, May 25, 2017

Indonesia’s anti-terrorism unit raided the home of a suspected suicide bomber on Thursday as authorities linked attacks that killed three police officers at a Jakarta bus station a day earlier to the Islamic State militant group.

Six police officers and six civilians were also wounded in the twin blasts set off five minutes apart by two attackers in the Kampung Melayu area of the Indonesian capital late on Wednesday, police said.

The attack was the deadliest in Indonesia since January 2016, when eight people were killed, four of them attackers, after suicide bombers and gunmen attacked the capital.

“We must continue to keep calm (and) keep cool. Because … we Muslims are preparing to enter the month of Ramadan for fasting,” President Joko Widodo said in a statement.

Authorities in the world’s biggest Muslim-majority nation are increasingly worried about a surge in radicalism, driven in part by a new generation of militants inspired by Islamic State.

National Police spokesman Awi Setyono said there was a link to Islamic State, but added, “We’re still studying whether it’s an international network.”

Earlier, he told reporters that police were investigating whether the attackers had direct orders from Syria or elsewhere.

A law enforcement source, who spoke on condition of anonymity, said they may have been linked to Jemaah Ansharut Daulah, an umbrella organisation on a U.S. State Department “terrorist” list that is estimated to have drawn hundreds of Islamic State sympathisers in Indonesia.

Indonesia has suffered a series of mostly low-level attacks by Islamic State sympathisers in the past 17 months.

Residents helped clean up debris on Thursday at the East Jakarta bus terminal, littered with bloodstains and broken glass after the attacks.

“After what happened in Manchester, in Marawi in the Philippines, maybe the cells here were triggered by the bombs and that lifted their passion to start bombing again,” Setyono told television station TVOne.

He was referring to a suicide bombing this week that killed 22 people in a crowded concert hall in the British city of Manchester.

In the southern Philippines, thousands of civilians have fled their homes after Islamist militants took over large parts of Marawi city, leading to a declaration of martial law.

While most recent attacks in Indonesia have been poorly organised, authorities believe about 400 Indonesians have joined Islamic State in Syria and could pose a more lethal threat if they come home.

Police found books of Islamic teachings and bayonets in a raid on the Bandung city home of a 30-year-old seller of herbal medicines who is suspected of carrying out Wednesday’s attack.

They also took a DNA sample from the mother of a second suspect, another 30-year-old Bandung man.

Investigators at the blast site found a receipt for a pressure cooker bought on Monday in the capital of the West Java province.

“We wanted to look for instructions at that location, or evidence … linked to the Kampung Melayu incident,” said National Police spokesman Martinus Sitompul.

A similar type of bomb was used in Bandung in February by a lone attacker, killed by police, who was suspected of links to a radical network sympathetic to Islamic State.

“There were similarities,” Setyono said, “only yesterday’s (attack) had been more perfected.”