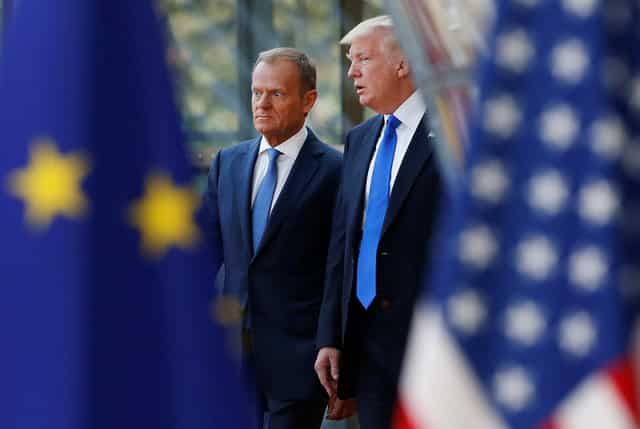 US President Donald Trump (R) walks with the President of the European Council Donald Tusk in Brussels, Belgium, May 25, 2017

A smiling Donald Trump offered European Union chiefs assurances on security in Brussels on Thursday but EU officials did not conceal lingering differences with the US president over Russia, trade and climate change.

In talks before a summit of NATO leaders at the Atlantic military alliance’s headquarters across town, an EU source highlighted that Trump had voiced fears that Brexit could cost US jobs – a possible sign of second thoughts on support for the British vote to leave which stunned the bloc.

And Trump also agreed to setting up a joint EU-US “action plan” on trade– an indication the new occupant of the White House is not as set on shunning free trade deals and promoting protectionism as some in Europe had feared he might.

Nonetheless, European Council President Donald Tusk indicated, there was something less than a meeting of minds on trade and other issues — despite the cordiality of Trump’s welcome at the new EU building which the former Polish premier informed him was popularly known as “Tusk Tower” in a nod to the former real estate developer’s signature New York headquarters.

“We agreed on many areas, first and foremost on counter-terrorism,” Tusk said after he and EUchief executive Jean-Claude Juncker met Trump for over an hour. “But some issues remain open, like climate and trade.”

European leaders have been urging Trump not to abandon the US commitment to cutting greenhouse gas emissions made when his predecessor Barack Obama signed up to the UN Paris accord.

Tusk also said he did not feel he and Trump were on exactly the same page in terms of dealing with Russian President Vladimir Putin, although they agreed on efforts to end conflict in Ukraine which the West blames on Moscow and which has resulted in both EU and US economic sanctions on Russia.

A spokeswoman for Juncker, the president of the European Commission which had been negotiating an ambitious free trade deal with Washington known as TTIP before Trump’s upset election victory, said the two sides would work to increase trade.

“Intensifying trade cooperation which is a win-win situation for both sides,” the spokeswoman said. “It was agreed to start work on a joint action plan on trade.”

It was not immediately clear if that might include a revival of work on TTIP. Trump has made clear his dislike of multilateral trade agreements, pulling out of the TPP agreement with Asian states. However, European leaders, including German Chancellor Angela Merkel, have suggested he is warming to trade talks with the EU, which unifies trade rules for all 28 states.

Trump irritated EU leaders during his election campaign last year by hailing Brexit and suggesting other countries might follow Britain out of the 28-nation bloc. Eurosceptic leaders said he would offer Britain a free trade deal once it left.

However, EU officials believe Trump has come to appreciate more since taking office the value of European integration to US interests. US businesses have taken advantage of its single market to reduce the costs of exporting to Europe.

An EU source said Trump had told Tusk and Juncker he was now worried that Americans may lose jobs as a result of Britain leaving the EU in 2019: He “expressed concern that jobs in the US would be lost because of Brexit”, the source said.

EU officials said the meeting had been constructive and friendly. Tusk and Juncker joked with Trump about the EU having “two presidents” and being “too complicated”. The US leader appeared to mix the two of them up during remarks in January, deepening concerns in Brussels that the reality TV star in the White House failed to take the European Union seriously.

Trump waxed lyrical about his first foreign trip, which has proved a welcome distraction to ethics questions at home, notably over alleged campaign ties to Russia. Pope Francis is “terrific”, Trump told Tusk and Juncker, and his welcome in Saudi Arabia was “beyond anything anyone’s ever seen”.

Tusk, a Communist-era dissident who once listed Trump among risks to the world order alongside Russia, China and Islamist violence, said he had tried to impress on the billionaire US president a need for Transatlantic cooperation to promote “values” like human rights and not just selfish “interests”.

Apoel boss Christiansen on the way out