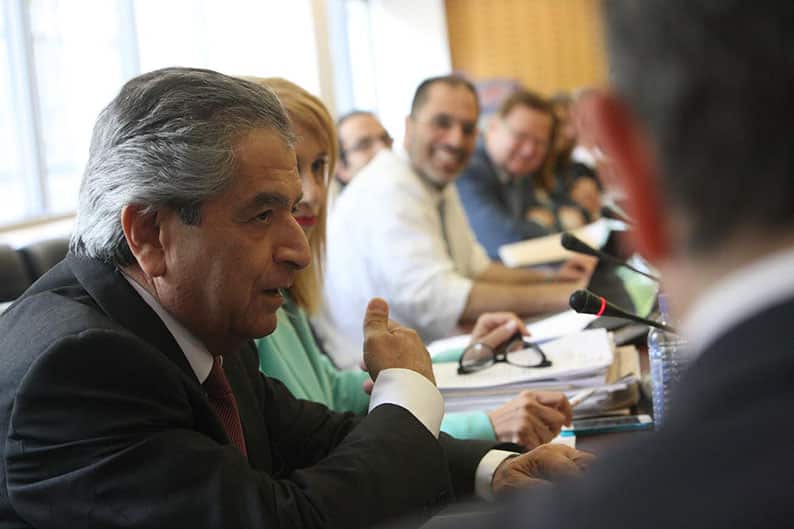 AG Costas Clerides at the House on Thursday (Christos Theodorides)

FOR YEARS everyone flouted the law on when civil servants may simultaneously hold an office with a political party, looking the other way because it suited them, attorney-general Costas Clerides said on Thursday.

But even at this late hour the law must be enforced, he added.

He was referring to the Public Service Commission (PSC), responsible for appointments, promotions and disciplinary control over civil servants.

The case of Savia Orphanidou, Clerides said, let the genie out of the bottle.

The whole matter surfaced after the secondment of Orphanidou, a finance ministry employee, to the European Investment Bank (EIB).

The audit office found the job opening had not been communicated to all finance ministry employees.

But it also discovered that Orphanidou – who sits on ruling Disy’s political bureau – had failed as mandated by law to request permission from the PSC to hold that party post. This quickly became the key talking point.

Finance minister Harris Georgiades has been criticized for setting up Oprhanidou with a cushy job with the EIB in Luxembourg.

Georgiades meanwhile announced that his ministry is initiating a disciplinary probe into all civil servants who hold a party office without permission.

To date, the ministry has identified a few dozen cases meriting investigation.

Georgiades called on political parties to hand over their lists of members who hold the dual capacity, in a bid to facilitate the investigation.

All cases would be looked into, including Orphanidou’s, he added.

In parliament, Georgiades took flak from opposition MPs, who said the disciplinary probe – which they otherwise welcomed – is a distraction from his handling of Orphanidou’s case.

Akel MP Irini Charalambidou accused Georgiades of sitting on the Orphanidou case for two months, doing nothing to rectify the situation.

Now, she said, the minister was exacting revenge for being put in a tight spot by making all civil servants fair game.

The rules have been steadily relaxed over the years. Under a law passed in 1967, there was a blanket prohibition on civil servants from joining a political party, even as a simple member.

Then in 1990 the law was amended, allowing civil servants to become simple party members (not considered a party office) on condition they were on the A13 pay scale or below.

In 1991, that provision was scrubbed, thus enabling all civil servants irrespective of their pay scale to join a party as a simple member.

Lastly, in 2015 civil servants were allowed to also hold a party office beyond membership, on condition that those on the A8 pay scale and above should seek permission from the PSC.

Our View: MPs could tackle underage drinking if they wanted to

A festival to raise a pint to in Nicosia