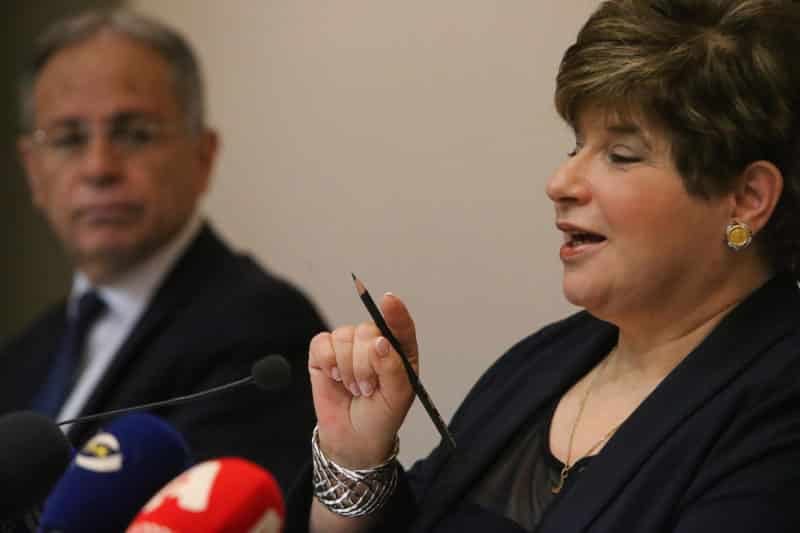 Central Bank of Cyprus Governor Chrystalla Georghadji said the supervisory authority was compelled to take action against FBME in July 2014 in order to protect the Cypriot banking system, and indirectly questioned the lack of action by other government bodies against the bank’s owners.

Three years ago, when the Financial Crime Enforcement Network (FinCEN), a division of the US Treasury, issued a statement describing FBME as a financial institution of primary money laundering concern and terrorist financing, “our entire banking system was at risk with respect to transactions in dollars,” she told reporters in Nicosia on Friday. “With its decision, FinCEN banned transactions by any US or US-based bank with FBME”.

“We were lucky back then to have the troika in Cyprus and (so) we were advised by international advisors,” she continued in reference to the central bank’s decision in 2014 to place the Cyprus branch of FBME under administration and subsequently resolution.

“Our actions saved the rest of the banking system,” Georghadji said.

In its 2014 decision, FinCEN barred US banks from opening and maintaining correspondent accounts with FBME. The Cyprus Business Mail understands that the decision was the result of irregularities in the implementation of Western sanctions against Russia in response to its annexation of Crimea, which is part of Ukraine.

The central bank governor was responding to a reporter’s question whether the central bank was prepared to assume responsibility in the event the Cypriot taxpayer is forced to foot the bill should the arbitration court of the International Chamber of Commerce in Paris rule in favour of the owners of FBME. There, the Lebanese brothers Ayoub Farid Saab and Fadi Michel Saab, are demanding up to €1.5bn in compensation from the Republic of Cyprus for the alleged failure to protect their investment, citing the provisions of a bilateral agreement with Lebanon. The Saabs initially demanded €500m in compensation.

Georghadji, in an obvious reference to Banca Privada d’Andorra which US authorities also blacklisted after it was accused of money laundering, added “the alleged owners of FBME themselves argued” that authorities arrested the bank owners.

“I didn’t notice bombastic comments when the FinCEN ruling (on FBME) became official,” after a US court dismissed the Saabs’ appeal last month, she continued.

Attorney-general Costas Clerides said on May 25, that authorities filed no charges in the FBME case, citing the lack of evidence, and added that the police continued to investigate the case. The police on Wednesday declined to comment.

In an impromptu interview on Friday, Georghadji said that the central bank decided to appeal the ruling.

Earlier, she said that she was surprised by criticism in Cypriot media for taking “strict measures” against the Cyprus branch of the Tanzanian-based lender adding that when the central bank is lenient, it is also accused of that.

Plus Properties unveils the new icon of Larnaca- “THE PEARL”

No easy starts for top guns at the French Open