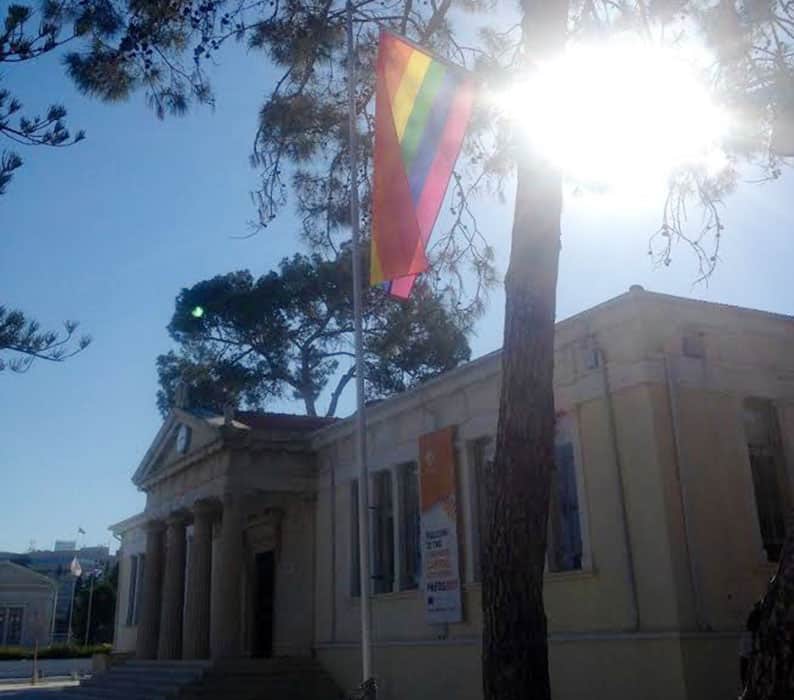 PAPHOS municipality hoisted the LGBT flag at Paphos town hall on Friday morning, for the first time, in support of Cyprus Pride.

Equal rights activist, South African Cypriot, Zac Theophanous, 38, told the Cyprus Mail that he undertook the initiative as he felt it is particularly important for Paphos to show it is forward thinking this year, as it holds the title of European capital of culture 2017.

“I had the idea of hoisting the LGBT flag at the Paphos Town Hall during Cyprus Pride Week and I wanted to show that our town supports equality and equal rights,” he said.

The hoisting of the flag comes just ahead of the Cyprus Pride Parade due to be held in Nicosia on Sunday.

Proactive Theophanous sent a request to the mayor and the municipal council and they voted in favour of the move.

“The mayor of Paphos, Phedonas Phedonos, was very open to the idea and accepting. He is a wonderful man,” he said.

He added that it is important to him to show that there is acceptance in the community for those that feel they have to hide their sexuality.

“This happens a lot in Paphos and many feel under pressure to ‘stay in’. I decided to ‘come out’ when I was thirty, which is quite late. But I’m not ashamed of who I am. My sexuality is part of who I am, I haven’t changed, this is not something I have become; I am still just me.”

As both Nicosia municipality and Lakatamia municipality have flown the flag in the past, the 38-year- old said it was time that Paphos did the same, especially in the year of the European Capital of culture to shown that Paphos is ‘all- inclusive’.

“This is not about LGBT, gender, race or sexual orientation, but it’s about equality for all,” he said.

Theophanous has the backing of Accept LGBT Cyprus and they generously donated the flag for this purpose, he said.

The annual Pride Festival, which is under the auspices of President Nicos Anastasiades this year, has the theme of Speak Love and is aimed at combatting homophobic and transphobic hate speech.

Pride Days festivities that got underway on May 13 and will culminate on May 28 with the Pride Parade, is also under the auspices of Nicosia Mayor Constantinos Yiorkadjis.

“I hope that this is something the Paphos will now do every year as they have the flag now.”

Turkish side ‘has never honoured agreement on enclaved’