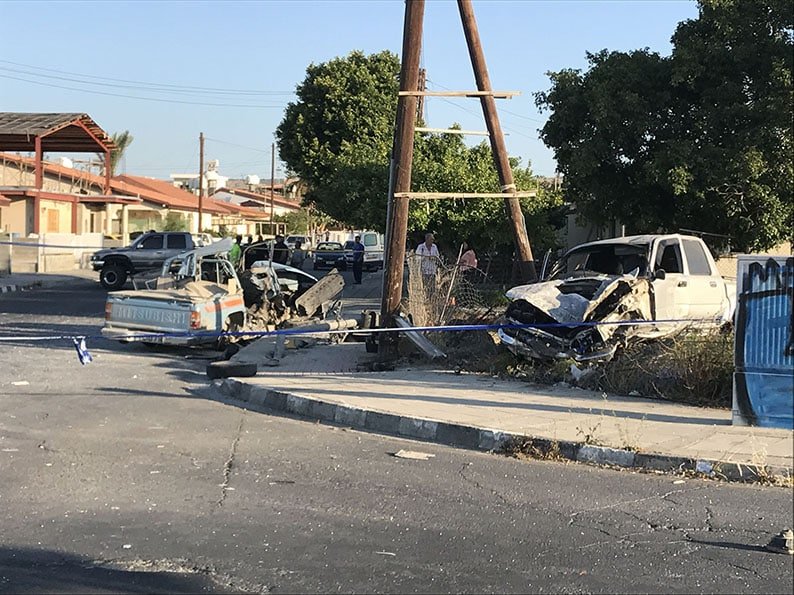 The remains of the two pick-up trucks that crashed, killing three men on Saturday

The first accident, which left three dead, took place shortly after 5am at Pano Polemidia, Limassol.

Three men, Andreas Yiasemi and Demetris Savva, both 32, as well as Panayiotis Stefanou, 23, were killed when their pick-up truck crashed into another pick-up truck.

Limassol traffic police chief Emilios Kafas said the crash had been “most violent”.

Kafas said that at least one of the two vehicles had been driven at high speed, while one of the two had run a red light – although it was still unclear which one.

Following the crash, Yiasemi’s car struck and cut off a traffic-light pole.

The three men had to be removed from the car by the Fire Service.

They were rushed to the Limassol general hospital, where they were pronounced dead on arrival.

Traffic police said none of them wore a seat belt. Yiasemi is survived by his wife and a five-year-old daughter.

Two people riding in the second pick-up truck, Kafas said, were also picked up by ambulances.

Police later announced that, in his statement, the driver denied having run a red light, leading to the crash.

Investigators were denied a warrant for his arrest by a court.

A breathalyser test on the driver gave a reading of 33mg, 11mg over the maximum allowed by law.

Police continue to investigate the circumstances of the accident.

A second accident, which took place on the Nicosia to Larnaca motorway near the Larnaca airport, claimed the life of a 64-year-old taxi-driver from Lakatamia, Nicosia.

According to a police report, around 7am on Saturday, Demetris Christoforou, had been driving a woman customer, 22, the taxi veered to the left of the motorway and fell into a 60-centimetre ditch, but kept going for 250 metres.

The car then returned to the motorway and crashed sideways into the concrete median barrier.

The driver had to be removed from the car by the Fire Service, while the passenger was taken to the Larnaca general hospital, where she was treated and discharged.

A post-mortem will be carried on the 64-year-old.

A minute with Athena Xenidou Producer/Director for film, TV and theatre