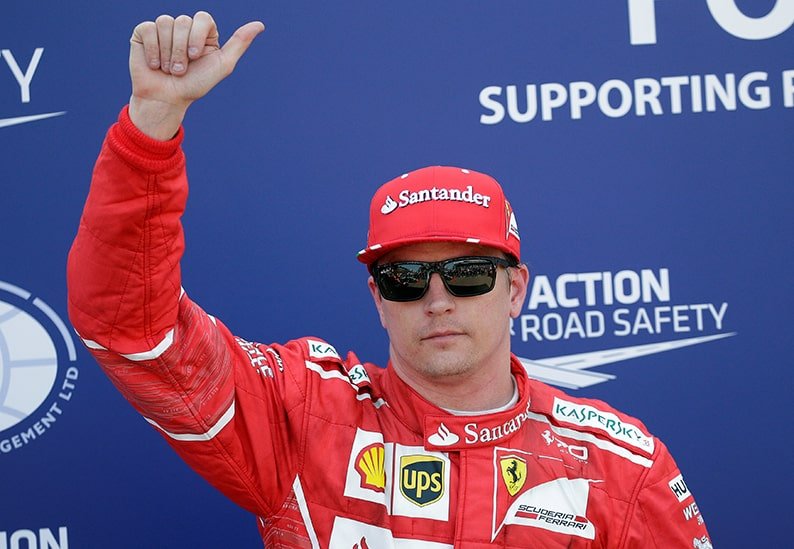 FERRARI veteran Kimi Raikkonen rolled back the years and upstaged his championship-leading team mate Sebastian Vettel to take pole position at the Monaco Formula One Grand Prix on Saturday.

Vettel qualified alongside the 37-year-old Finn on the front row, with Ferrari’s pace making them clear favourites for a glamour race the Italian team last won in 2001 with Michael Schumacher.

The pole ended a nine-year drought for Raikkonen whose last was at the June 2008 French Grand Prix, 129 races ago when he was the reigning world champion and German Vettel had yet to stand on top of a Formula One podium.

“I’m really happy for Kimi because he deserves it. The champion is coming out,” said Ferrari team boss Maurizio Arrivabene after Raikkonen put in the fastest lap ever around Monaco of one minute 12.178 seconds.

“Sebastian made a mistake in Turn Five but having two cars up there means I’m happy.”

Britain’s triple champion Lewis Hamilton, six points behind Vettel in the standings after five races, suffered a major blow when he failed to muscle his Mercedes into the top 10 and qualified only 14th.

The triple champion will move up to 13th after compatriot Jenson Button’s 15-place grid penalty is applied, however.

Button, standing in for Fernando Alonso at McLaren while the Spaniard competes in Sunday’s Indianapolis 500, qualified an impressive ninth.

Hamilton’s hopes of one last quick lap to make the cut and reach the final session were scuppered when Belgian rookie Stoffel Vandoorne smashed his McLaren into the wall at the exit to the Swimming Pool complex.

That brought out yellow warning flags, forcing other cars to slow with only seconds left on the clock and Hamilton behind him on the road in a car that looked a real handful out of the corners.

At one point, as the barriers loomed at Massenet on the approach to Casino Square and he snapped the Mercedes back into shape, he shook a gloved hand in relief as if to say ‘That was close”.

“I can’t pinpoint the problem. It’s disappointing,” said the Briton, who lost a minute of the session when he had to stop at the weighbridge towards the end of the second session as he came into the pits.

“It’s a little bit unfortunate with the yellow flag at the end. That lap may have got me into the top 10 but I think I’d have struggled to be in the top five.

“Valtteri’s lap shows we’re not terrible here so we need to know what happened,” he said referring to Finnish team mate Valtteri Bottas.

Bottas, who replaced retired 2016 champion Nico Rosberg in January, was third and two hundredths of a second off Vettel’s time of 1:12.221. Red Bull’s 19-year-old Dutch driver Max Verstappen joined him on the second row.

“That was everything we had today. The red car was just too fast,” said Bottas.

Australian Daniel Ricciardo, on pole in the Mediterranean principality last year for Red Bull, will start fifth and next to Spaniard Carlos Sainz for Toro Rosso.

A new museum reflects the riches of the past