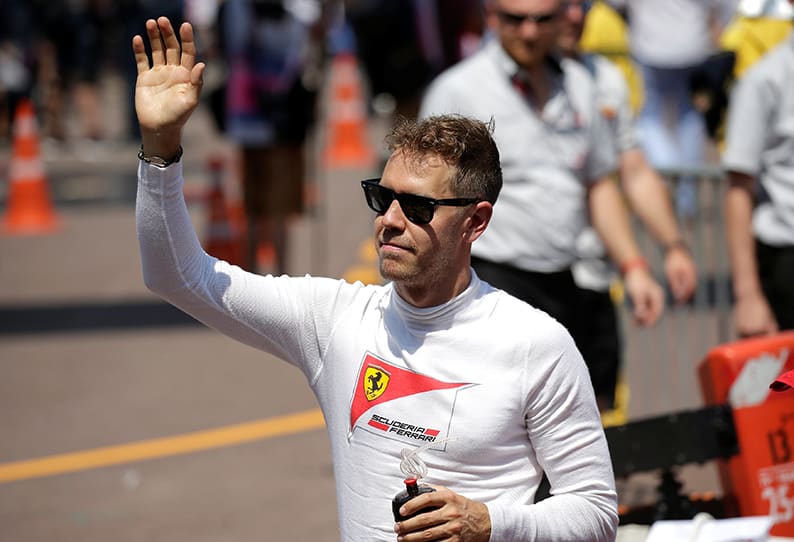 FERRARI’S championship leader Sebastian Vettel was faster than ever in final Monaco Grand Prix practice on Saturday while Formula One title rival Lewis Hamilton remained well off the pace in his Mercedes.

The German lapped the winding harbourside street circuit in a best time of one minute 12.395 seconds, with Finnish team mate Kimi Raikkonen 0.345 slower on a sunny morning in the Mediterranean principality.

Hamilton was only fifth, 0.835 slower than Vettel, while team mate Valtteri Bottas was third and 0.435 off the Ferrari’s pace.

Vettel had also been top of the timesheets in Thursday practice, when his car’s speed was obvious to all as he lapped the circuit in 1:12.720 — at the time the quickest ever lap of Monaco.

The Ferrari driver, who leads Hamilton by six points after two wins each, is already looking like the clear favourite for what would be the Italian team’s first Monaco triumph since Michael Schumacher in 2001.

Force India’s French rookie Esteban Ocon brought the session to a close with a smash, breaking his suspension on the exit to the swimming pool complex and ploughing straight on into the energy-absorbent wall.

There was more gloom for McLaren, whose hopes of scoring their first points of the year receded with a 15-place grid penalty for Britain’s Jenson Button after a problem with his Honda power unit.

The 2009 champion, who is standing in for Fernando Alonso while the Spaniard competes in the Indianapolis 500 on Sunday, now looks set to start in last place.

“It’s bad for him and for McLaren. We weren’t expecting it at all,” said Racing Director Eric Boullier.

A minute with Athena Xenidou Producer/Director for film, TV and theatre

Jewels of ballet shine on screen

Silverstone welcomes back the fans with a new format