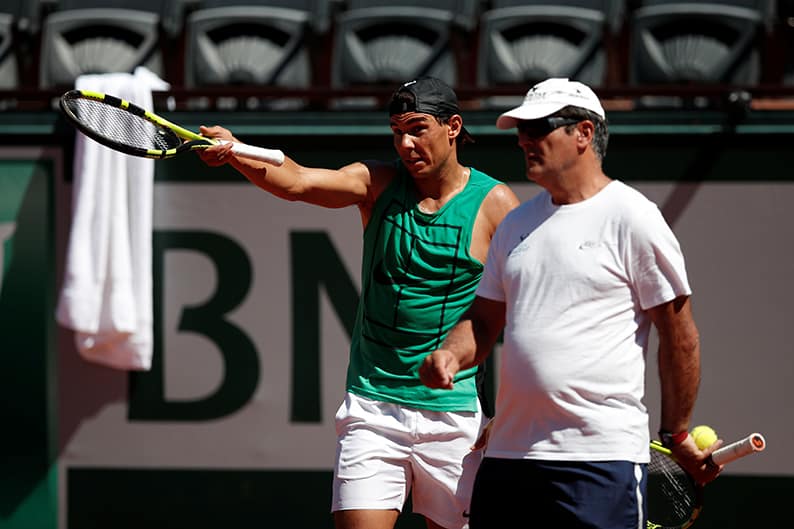 FOR the first time in three years, Rafael Nadal will bounce through the Roland Garros gates at the peak of his powers and favourite to take his collection of French Open titles to ten.

The Spaniard, who hits 31 next week, has turned back the clock to sweep through the European claycourt season with titles in Monte Carlo, Barcelona and Madrid and is a daunting obstacle for anyone with genuine title ambitions.

With man-of-the-season Roger Federer sitting it out to focus on Wimbledon, defending champion Novak Djokovic just showing signs of finding his mojo and world number one Andy Murray badly out of sorts, Nadal is clear favourite.

Potential challenges could come from a new generation of big hitters such as rising Austrian Dominic Thiem and Germany’s new wunderkind Alexander Zverev, but Nadal looks in the mood to regain his Parisian throne.

It feels right too because Roland Garros without the Mallorcan in full flow is a lesser spectacle.

There was something unsettling about watching Nadal being thrashed by Djokovic in the 2015 quarter-finals, only his second ever loss at the slam he has owned since 2005.

A chronic loss of form, fitness and confidence contributed to that defeat, while last year he was looking good until a wrist injury forced him to withdraw before a third-round match against Spaniard Marcel Granollers.

The last of Nadal’s 14 grand slam titles came on a drizzly day in Paris in 2014 when he beat David Ferrer and there have been times since then when his major-winning days looked over.

But in what has been as astonishing ‘retro’ year for men’s tennis Nadal, with fellow Mallorcan Carlos Moya added to his coaching support, came within a whisker of beating Federer in an epic Australian Open final.

He won 17 claycourt matches in a row before Thiem ended his charge in Rome. His whiplash forehand is back to its fizzing best, his serving stats are as good as ever and there are no obvious signs of the injuries that have plagued him.

“It’s tough to say that he has come all the way back to his absolute peak but he is playing tremendous tennis,” seven-times major winner John McEnroe told Reuters.

“A couple of years ago against Djokovic that was about the only time I saw Rafa look like he didn’t want to be on court. Last year he retired at the third round stage.

“So having seen that, there’s a little bit of uncertainty. But he’s playing the best of anyone on clay.”

Fourth seed Nadal, who opens against unpredictable Frenchman Benoit Paire, has second seed Djokovic in his half. In the other half, Murray’s route potentially includes a third-round against Juan Martin del Potro and a semi-final against 2015 champion Stan Wawrinka.

Djokovic, who plays claycourter Granollers in round one, will have former champion Andre Agasssi in his corner after hiring the American as his coach at the French.

That will add another storyline to a men’s championship already packed with intrigue.

“I think this could be potentially very exciting bringing on Andre,” ESPN pundit and former world number four Brad Gilbert said of Djokovic, who has trended downwards since competing his career grand slam by beating Murray in the 2016 final.

“Andre brings an incredible amount of knowledge, wisdom, passion and Djokovic is looking for some motivation.”

Away from the usual suspects, 20-year-old Zverev could be on the verge of something special after conquering Rome, although a first-round against Spain’s Fernando Verdasco is dangerous.

“It’s now just a question of when not if he’ll win his first Grand Slam. It seems like he is getting closer,” McEnroe said of the world number 10.