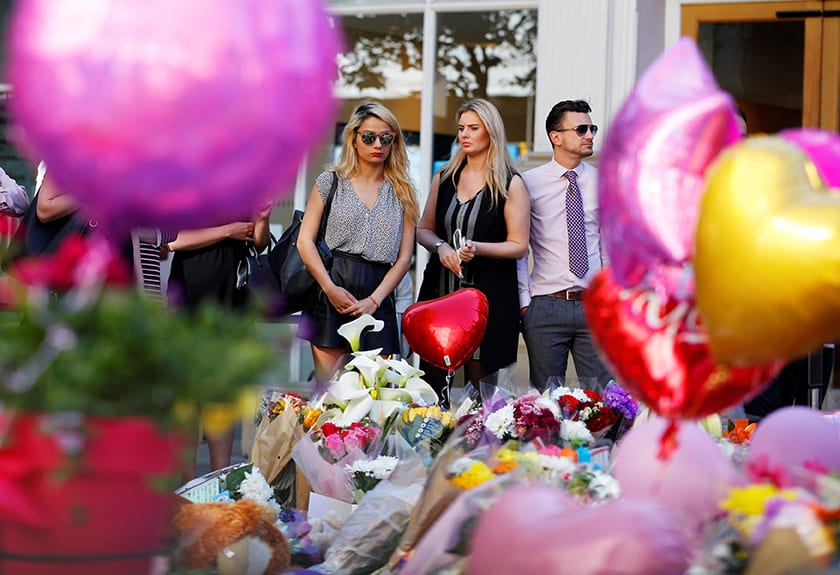 People look upon the flowers, messages and tokens left in tribute to the victims of the attact on Manchester Arena, in central Manchester, Britain May 26, 2017. REUTERS/Stefan Wermuth

It shouldn’t be a surprise that Islamic State was quick to claim responsibility for Monday’s suicide attack in Manchester that killed 22 people. As its last territory in Iraq’s second city of Mosul falls to US-backed Iraqi forces and its Syrian capital Raqqa is encircled, the group is increasingly desperate for legitimacy. Attacks on the West are one of its few remaining options.

Whatever the truth, Islamic State faces another, perhaps more serious problem. Its attacks on Europe may be monstrous, but they yield a declining political return.

Islamic State wants its atrocities to foster divisions, driving a wedge between native populations and more recent Muslim migrants. That would bolster the group’s argument that only a radical Middle Eastern caliphate is capable of protecting Muslims, and potentially drive new recruits both to fight its regional wars and conduct attacks farther afield. But that doesn’t seem to be happening.

Events in Europe suggest IS is failing in its mission to divide. Since January 2015, France has been on the receiving end of a higher tempo and intensity of Islamist militant attacks than any other Western state. In its elections earlier this month, however, the majority of voters rejected Marine Le Pen’s National Front, with its strong anti-Muslim rhetoric, to elect centrist Emmanuel Macron.

That was despite a suspected Islamist militant attack on the Champs Elysees in central Paris that killed a police officer barely four days before the first round vote. Despite worries the attack might boost the performance of the far right, there is no evidence it did.

Similarly in Germany, a backlash over migration fuelled by several militant attacks last year appears to be fading, despite the December truck attack on a Berlin Christmas market that left 12 dead. Chancellor Angela Merkel looks set to be the victor in the national elections in September, perhaps even cementing her power further.

In Britain, political parties temporarily suspended campaigning following the Manchester attack. It seems unlikely the incident will affect the election, however. UK authorities say for now they have no intention of further raising the country’s terror alert status, and there seems to be little public enthusiasm for any measures akin to France’s state of emergency, which has been in place since 2015 and gives police exceptional search-and-arrest powers.

A heightened police presence can only do so much. For the Paris attack in November 2015 that killed 130 at a concert and nearby restaurant, Islamic State appeared to have been able to get its assailants into Europe from the Middle East. More recently, however, the group has largely relied on using online propaganda to radicalise individuals whose independent actions it then claims responsibility for afterwards.

To an extent, it has no choice – European security forces have become adept at detecting and rolling up extended militant networks, but inevitably find it harder to track down “lone wolves”.

Defending “soft” targets like the Manchester concert hall will always difficult, if not impossible. Improvised explosive devices will always be buildable by those with skills and the required material – although police are getting better at tracking the purchase of components and catching would-be bomb-makers before they are finished. Still, as the Nice truck attack and others have shown, there are always crude, but effective ways to strike.

Even with the number of casualties in Paris, Nice, Brussels and now, Manchester, Islamic militant groups have had less of an impact on Europe than on countries such as Pakistan, Nigeria or Iraq. Those nations, too, have shown remarkable resilience. Occasionally, public concern over attacks has had a significant political effect – the abduction of more than 200 girls by Boko Haram was seen as a factor in the defeat of Nigerian President Goodluck Jonathan by former military leader Muhammadu Buhari the following year. More usually, however, it does not.

Whether such attacks can change domestic political dynamics depends on their shock value. The destruction of the Twin Towers on 9/11, for example, was unprecedented in scale and spectacle to the extent that it redefined Western thinking on the Middle East and militancy for years. America’s ongoing acceptance of civilian-related gun deaths, however – including attacks on schools – is a stark reminder of just how normalised terrible incidents can become.

The attack in Manchester is the most serious in Britain since the July 2005 bombings of the London transport system. After other events on the continent, however, neither it nor the Westminster attack felt surprising. That doesn’t diminish the grief and the mourning, but it does limit the broader political impact.

Islamic State will continue fighting, even as it loses territory. If it is destroyed outright – or delegitimised through its own failure to achieve its end – then others will take its place.

Ironically, however, the more attacks the group mounts, the less impact each incident will have.

Peter Apps is Reuters global affairs columnist. He is founder and executive director of the Project for Study of the 21st Century; PS21, a non-national, non-partisan, non-ideological think tank in London, New York and Washington

Free speech, the great misnomer of the 21st century

Public safety in time of war