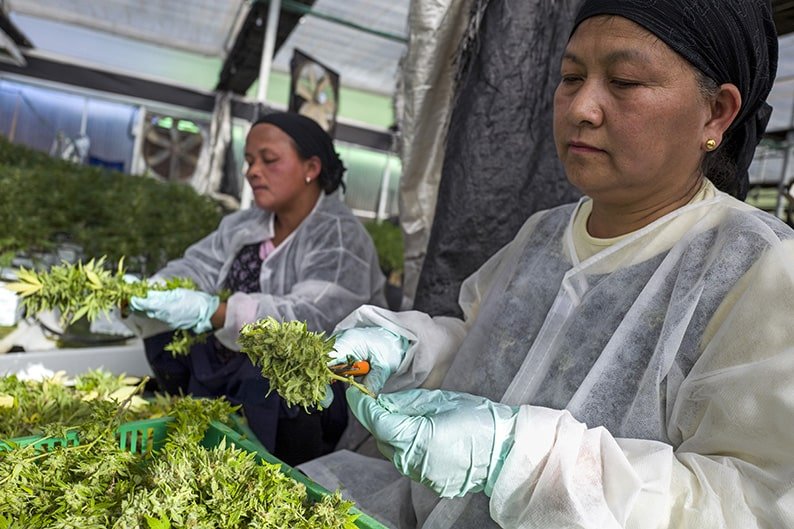 Medical cannabis plantation at Birya, outside Safed in northern Israel

Tight restrictions in the government’s revolutionary proposal to legalise the import and use of medical cannabis have left those supporting sweeping deregulation with a bittersweet feeling, according to biologist and Friends of Cannabis group co-founder Petros Evdokas.

Patients and activists have long fought for the legalisation of medical cannabis, but, despite mounting evidence pointing to its benefits in both pain relief and the treatment of specific conditions, have always stumbled on strong resistance by mainstream attitudes. According to Health Minister Giorgos Pamboridis, the main problem has been a “widespread, albeit false, notion that it somehow helps legitimise the use of recreational cannabis”.

A set of government-proposed regulations to allow the import, distribution and use of pharmaceutical-grade cannabis, unveiled and put to public consultation in February, would, if approved by parliament, allow government to issue two licences for a period “up to 15 years”.

The draft law, and the change in the government’s attitude that goes with it, marks a major breakthrough in activist groups’ struggle. As it stands, the law lists cannabis as a forbidden substance – with the likes of cocaine and heroin – as well as, crucially, a controlled substance.

“This means that if medical uses are found, then the drug would be subjected to regulations in place for the use of other drugs, such as Oxycodone, etcetera,” Evdokas told the Sunday Mail.

“In the current law, there is a paragraph that gives the health minister the authority to give permission for the use of cannabis for medical reasons.”

Indeed, an incident in which Pamboridis was asked to give such permission was how the proposed reform came to be.

“A short time after I took over as health minister, I received a letter from a patient in a very difficult condition, requesting that I grant permission for the use of medical cannabis,” Pamboridis recalled at a convention on medical cannabis organised by the Green party earlier this month.

“But then I immediately came across the real problem: there was no way to get our hands on the stuff. It is produced and exported legally, but we can’t get it. After two years, we only managed a few days ago to import the first batch of medical cannabis oil for use by specific individuals.”

But the government’s proposal for the drastic overhaul of the law on medical cannabis comes with regulation so detailed and tight, making abuse – by the licensees or recreational users – next to impossible, that, perhaps unsurprisingly, the mood of people like Evdokas is hardly celebratory.

“First of all, the provision that only patients who have first exhausted all available treatments will be eligible to use medical cannabis is a violation of the European charter of patients’ rights,” Evdokas said.

According to this document, each individual has the right “to freely choose from among different treatment procedures” and “to refuse a treatment or a medical intervention”.

“If the final bill includes such a provision, then from the first day it becomes law we will be in court fighting it,” the activist warned.

A second limitation, Evdokas said, the bill places restrictions on which doctors can prescribe the drug.

“At the moment, there are only six doctors who can prescribe medical cannabis, and most of them admit that they do not know how to use it medically,” he said.

“There is a huge need for educational seminars for doctors, nurses, psychologists, pharmacists, and, most importantly, patients and their relatives.”

But Evdokas’ biggest beef is with the provision that only two licences will be made available by the government for cannabis production, processing, and distribution, and he argues that cultivation should be opened to individual users – “like tomatoes”.

“European Union law provides that monopolies and oligopolies are forbidden,” he said.

“Any part of the market that belongs to one or only a few companies or people is considered as stifling competition, and therefore is illegal. Especially as these licences will be given for a period of 15 years – it is obviously a state-sanctioned monopoly.”

“There are about 600 varieties of cannabis at the moment, and each type has a different medical use,” he said.

“Most patients who are interested in medical cannabis are informed and know exactly what type of cannabis is appropriate for their treatment. If the companies only produce one or two, or even 20, types of cannabis, how would the needs of all patients be covered?”

There are valid arguments supporting the health ministry’s choice of tight regulation.

“We are attempting to create a strict environment for the cultivation and manufacture of medical cannabis at the highest-possible level of quality, in order to encourage not only our doctors to expose themselves to the benefits of medical cannabis but mainly to attract the investments our country needs to conduct in-depth pharmaceutical research,” Pamboridis explained.

Quality standards are obviously hard to maintain with home-grown cannabis. But even more than that, the licensees per the government proposal will be required to install CCTV at their premises – a requirement most households would probably be unable to adhere to. Plainly, even if the possibility of abuse were to be adequately addressed, little would stand between a trespasser on a private orchard and legally-grown cannabis plants in bloom.

In addition, copious record-keeping required of manufacturers, distributors, and pharmacists would be rendered all but pointless if domestic cultivation were allowed.

Perhaps Evdokas’ most legitimate point, however, was that it made no sense to make pharmaceutical-grade cannabis to adults only.

“The bill prohibits use of medical cannabis to minors, when there are thousands of children with conditions that cannabis can help with,” he told daily Politis in February.

“Laws today allow the use of extremely dangerous or addictive substances to children, such as chemotherapy or opioids, but they choose to exclude them from a natural product.”