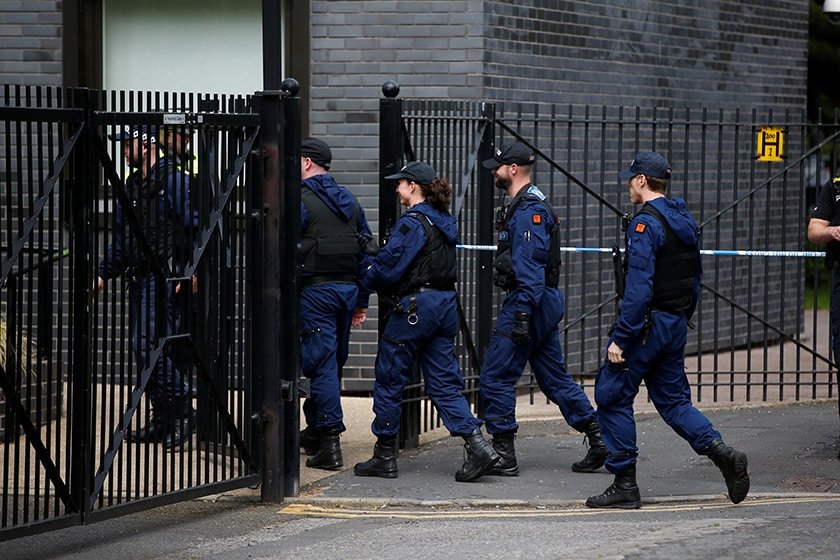 During World War II the Defence of the Realm Regulations enabled the relevant minister of the government to intern without trial any person if the minister had reasonable grounds to believe he was of hostile origins and associations, or recently concerned in acts prejudicial to public safety, or engaged in the preparation or instigation of such acts.

Many foreign nationals were detained under this infamous provision. Not even Jewish people of German and Italian origin were spared despite their anti-Nazi credentials. If memory serves, some well-known Italian families in Cyprus were also interned and exiled to Egypt for a short time during the war.

Internment was done for a limited time in sensitive areas of the country but by the end of the war only a handful of persons were in administrative detention. The point was that it reassured the public that there were no fifth columnists on the loose batting for the other side at critical times in critical areas of the UK.

The complexities of whether Britain is legally at war at the present time that would justify such draconian laws are not important. The fact is that Britain is engaged in foreign wars – in Iraq, Syria and Libya. If you engage in wars, you have enemies and if you have enemies and they have sympathisers who live in Britain, it does not matter how these sympathisers view British foreign policy, or whether they have a distorted view of Islam, or a sense of grievance about the direct or collateral harm inflicted on innocent civilians in those wars, or all the above and more. As the Turkish president told the Americans there are no good and bad terrorists.

What is important is that Britain is engaged in wars on many fronts and there are persons living in Britain who would do British people harm at home and abroad. The appalling murder of innocent children in Manchester earlier this week and the murder of British tourists in Tunisia in 2015 are just two terrifying examples. People are entitled to expect that as long as Britain is engaged in hostilities in foreign countries, those associated with her enemies living in Britain need to be controlled for a limited time as happened during World War II.

Inevitably there are civil liberties implications and the government has a duty to prepare the country for the knock-on effect of foreign wars not only on public safety but on civil liberties as well. One of the most famous dissentient judgements in support of civil liberties was given in a case in the highest court in England during World War II. It was not, however, that internment for a limited period in war time was wrong in principle but that the relevant minister actually had to have reasonable grounds to believe a person was of hostile origin or associations and that it was necessary to detain him.

I do not buy the argument that terrorists win if civil liberties are held in abeyance for a limited period. That has not historically been the case. On the contrary, the European Convention on Human Rights that, among other rights, protects the right to liberty of the person was passed after World War II as a result of the defeat of the Nazis, even though civil liberties had to be suspended for a short while to deal with the exigencies of the war.

As it happens the convention was drafted by English lawyers and reflects the values and traditions of the common law going back many years. I would not be surprised if some of the lawyers who drafted the defence regulations also had a hand in drafting the convention. Curiously it did not become part of English domestic law until the Human Rights Act 1998 came into force. It was thought unnecessary as it reflected the common law of England anyway. It is now fully part of the law of the land and can be invoked directly in the courts in England.

That said, in time of war or other public emergency, states may suspend the protection of the human rights guaranteed by the convention depending on the exigencies of the situation – except the right to life and the rights to freedom from torture, slavery and retrospective punishment.

Britain, in the past, and France and Turkey, more recently, have used the emergency suspension provisions of the convention to suspend rights including the right to liberty of the person.

States must however justify the nature, duration and extent of the rights suspended. Britain was taken to task in the European Court by the Irish government for the duration of the internment measures to deal with terrorism in Northern Ireland but was able to justify it on the basis that the threat of terrorism to democracy gives states a wide margin of appreciation. There can therefore be little doubt that the European Court would react favourably to a finely calibrated internment policy on mainland Britain to deal with the kind of terrorism that targets children and innocent civilians.

The consequences to immigrant communities of not taking such measures could be far worse. Experience shows that if governments do not take obvious routine precautions, people take the law in their own hands, but worse still, they elect fascist governments that would not hesitate in the wholesale expulsion of communities if the kind of atrocity we saw in Manchester happens on their watch. Scratch the surface and the veneer of civilised values would disappear in no time and the clamour for vengeance would be received with glee by governments of that ilk.

A judicious use of administrative detention would avoid destabilising community relations. Moreover, in this day and age there would be no need to suspend the right to challenge administrative detention by the writ of Habeas Corpus. With modern technology it would be possible for detainees to be produced in court by video link and they could be provided digitally with particulars of the nature of the associations that are of concern and their right to challenge detention if it cannot stand up to judicial scrutiny. Furthermore, the nature of detention would not be like a prison at all and may even be more akin to house arrest or curfew. The purpose is not to punish people for their associations but to ensure public safety by controlling their activities just in case those associations crystallise into terrorist activities.

The bottom line however is this: if someone has to make a sacrifice it is better it is someone against whom there are reasonable grounds to suspect hostile associations than innocent children at a pop concert.

The TV show we’ll never get to see: Turkish Cypriots on Cybc