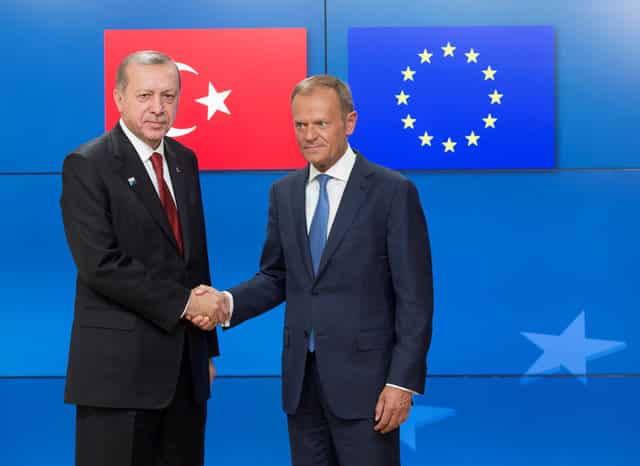 Talks last week between the heads of European Union institutions and Turkey’s president, Tayyip Erdogan, were held in a “good atmosphere” but produced no new agreements, officials in Brussels said, playing down comments by the Turkish leader.

Tensions between Turkey and the EU run high over rights and security issues, but the bloc depends on the help of Nato ally Ankara on migration and the conflict in Syria.

After meeting European Council President Donald Tusk and European Commission President Jean-Claude Juncker last week in Brussels, Erdogan was quoted as saying he had been presented with a new 12-month timetable for renewing ties.

But senior EU officials voiced caution and some scepticism, saying no formal deadlines were set. The EU has a list of mid- and high-level meetings it hopes to hold with Turkey this year, they said, but any improvement in bilateral ties would depend on Erdogan’s resolving at least some of many points of contention.

They include the EU’s worry that Turkey’s anti-terror laws are too broad and used to persecute Erdogan critics, as demonstrated in Ankara’s sweeping security crackdown following a botched coup almost a year ago.

Other concerns relate to the treatment of the Kurds, the media and academics, as well as Erdogan moving to assume even more powers following an April referendum.

The pre-referendum campaign produced new spats with EU members Germany and the Netherlands, whose authorities Erdogan likened to Nazis when they had prevented Turkish politicians from campaigning in their countries.

Despite the often harsh rhetoric, senior EU officials said the atmosphere of the meeting was “good” and “constructive”.

“It was definitely not hostile, but both sides pretty much restated their well-known positions,” one of the sources said.

Turkey complains about slow progress in its stalled EU accession talks, discussions on visa-free travel for Turks to the EU and disbursement of EU funds to Syrian refugees living in Turkey.

The bloc says Erdogan must first address concerns over human rights and rule of law, and should work with the Council of Europe – a European rights watchdog of which Turkey is a member – on that..

The EU says progress in talks over reuniting the ethnically split Cyprus is also key to unlocking other area, including ideas to beef up an existing customs union between Turkey and the EU.

Erdogan has suggested Turkey could hold a referendum on continuing EU accession talks, and possibly another on reinstating the death penalty. Restoring capital punishment would end Turkey’s bid to join the EU.

EU leaders will discuss their ties and especially their cooperation with Turkey on migration when in Brussels on June 22-23. Calls from the European Parliament to formally halt Turkey’s accession talks have so far not reached critical mass.

“We have no choice,” one of the sources said when asked if the EU was looking to working more with Turkey after the top-level talks with Erdogan.

Eide: ‘Not easy but we’re not giving up’