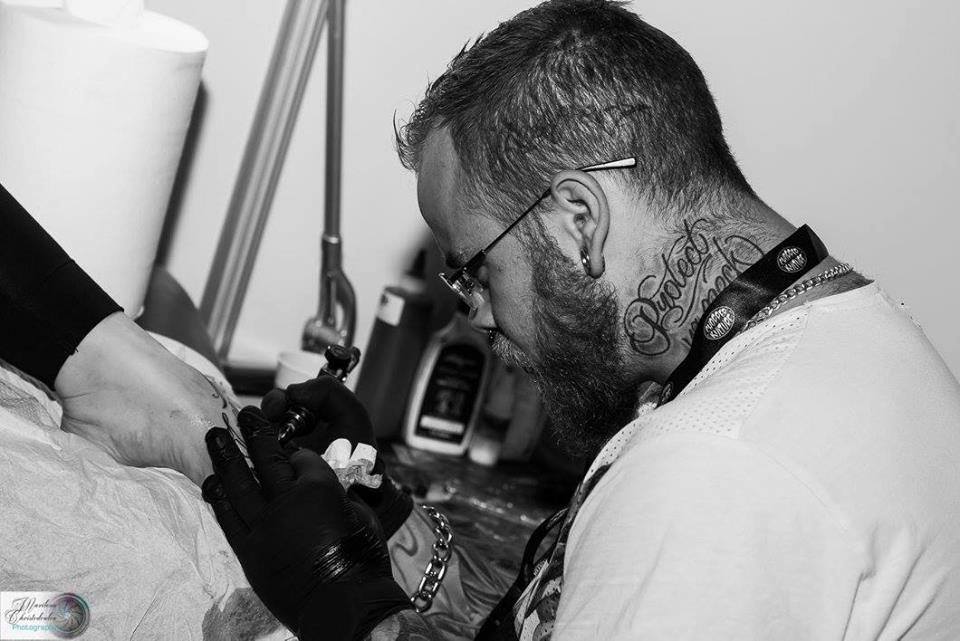 Paphos tattooist Andy 'Poach' Thompson at work. All proceeds from the Manchester bee tattoos will go to families of the victims

A PAPHOS tattooist is offering ‘Manchester bee’ tattoos for those wanting to remember the victims of the Manchester bombing with a permanent inking.

All proceeds will go to the families of those killed in last week’s terrorist attack.

Well-known tattooist, Andy ‘Poach’ Thompson told the Cyprus Mail that he wanted to do something to help the charity initative which has been set up in Manchester to help the families of victims.

“A few people asked me if I was doing the Manchester bees, a number of my colleagues in the UK were and I wanted to do something too, I have family and friends in the UK and what happened is terrible,” he said.

The Manchester bee has long been a symbol of the city’s industrial past. The busy workers were often compared to bees in their hives.

More recently, the bee represented the hard work and community spirit of Manchester, and now it is being used to symbolise the way locals rallied and supported each other in the aftermath of the attack.

The youngest victim of the bombing, aged only eight, was a British Cypriot, Saffie Rose Roussos.

Paphos businessman, Nick Cairns, originally from Manchester, is contemplating having the Manchester bee tattoo, which will be his first, to show his support to the community.

“I had never thought about having a tattoo, but this is something I feel strongly about, a lifelong remembrance that I won’t be getting rid of,” he said.

Cairns said that, along with his family, he has watched a number of concerts at the venue and stood in the spot where the bomb was detonated many times.

A dedicated ‘Just Giving’ page was set up by Manchester tattooists in response to the terror attack, with the aim of raising 50,000 euros. They are already close to the target.

Manchester tattoo artists pledged to dedicate a full day in order to tattoo as many Manchester bees as possible.

The idea has caught on around the world, with hundreds of tattoo studios wanting to show their solidarity.

Thompson will carry out the Manchester bee tattoos on Tuesday and Saturday in Paphos.

Thompson said that each tattoo will take him around 20 mins and he is charging 50 euros for each one. All of the proceeds will then be passed on to the cause, he said.

“A hundred per cent of the money I take will be added to the ‘Just Giving’ page in the UK, it was important to help in some way,” he said.

A couple of spaces remain for both Tuesday, May 30, when he is tattooing the bees until 5pm and on Saturday, June 3, when he will be tattooing all day.

For those wanting to make a donation, but not receive a tattoo, the Just Giving page is: