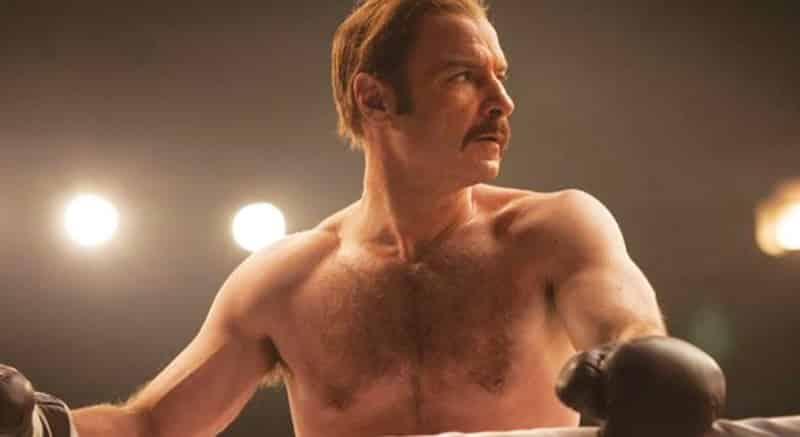 It says Chuck on our cinema schedules, but The Bleeder is the title on the print I watched; even when it comes to the minuscule Cyprus market, poor Chuck Wepner can’t catch a break. Wepner (Liev Schreiber) was the ‘Bayonne Bleeder’, named after the city of Bayonne, New Jersey and his own tendency to bleed copiously when cut – an unfortunate trait for a boxer, though in fact it barely features in the film after the scene where Muhammad Ali makes a joke about it. Wepner went almost 15 rounds with Ali back in the 70s, not unlike Rocky Balboa’s epic bout with Apollo Creed. Coincidence? Well, no.

Wepner was ‘the real Rocky Balboa’, the actual contender on whom Sylvester Stallone based his most famous character – and this lively, if predictable, biopic charts his rise and fall, though in fact he doesn’t rise very far (he wasn’t involved in Rocky, and didn’t make a cent out of the movie) and falls quite precipitously. The ‘Bleeder’ nickname is appropriate because Chuck mostly bleeds here, literally and (especially) metaphorically: like Jake Gyllenhaal in Southpaw, his great talent as a boxer lies in being able to take a punch, again and again – and his life also consists of taking punches, though admittedly it’s mostly his own fault.

Chuck is by no means a bad man; he loves his wife Phyllis (Elisabeth Moss), loves his daughter, makes a decent living as a liquor salesman (“How you doin’?” he tells his reflection in the mirror, practising for customers; “Chuck Wepner. Life treatin’ ya good?”) when he’s not trying to make it as a prizefighter. Chuck, however, is a weak, vain man. He loves to feel special, loves being the centre of attention – and loves the women who make him feel special, even when those women aren’t Phyllis. His 15 minutes of fame come when Ali, fresh from the ‘Rumble in the Jungle’, decides that he wants to fight a white guy, just to make a point, and Chuck is the only white guy in the top 10 – but his fame is unfortunately extended by the whole Rocky business, which is when the dreams of a Hollywood career begin. And the lines of coke. And the parties.

Chuck is the story of a footnote, and indeed a double footnote: a footnote in the history of boxing, and a footnote in the history of movies. The film itself is also a bit of a footnote, a low-key entry in a boxing genre that’s been unusually active in recent years. We’ve had Southpaw, Creed, Hands of Stone – plus the Finnish film The Happiest Day in the Life of Olli Maki, which won last year’s Un Certain Regard at Cannes and recently screened in Cyprus Film Days. That may be Chuck’s closest cousin, being amiable (as opposed to melodramatic) and less a sports movie than a character drama, plus a hymn to the virtues of a quiet life and a loving family; Chuck is also in that vein, its secret weapon being perhaps Michael Rapaport as our hero’s estranged brother whose dull suburban life is a million miles from celebrity, setting up an eleventh-hour reunion that’s surprisingly touching, after all Chuck has been through.

The strikes against this film are obvious enough. It’s predictable. It’s maudlin, and tinged with self-pity (prison is “exactly where I belonged,” muses Chuck, when the law catches up with him). It’s not really a boxing movie, even taking the edge off its one fight (with Ali) by having Chuck narrate it in weary voice-over. One could also mention that it underuses two fine actresses, Elisabeth Moss and Naomi Watts (mostly required to act sad and sassy, respectively). Yet there’s also an attractively grainy 70s look and a guileless, foolish, good-hearted hero who’s hard to hate, even as he gets in the way of his own life. Chuck writes Phyllis a poem called ‘My One and Only’, and sincerely means every word – at least till he meets some new bimbo, and gets carried away. Chuck walks into a club to be welcomed by the band playing the Rocky theme, and acts the part with gusto – even though he’s not Rocky, he didn’t even make Rocky, he’s never even met Sylvester Stallone.

Stallone does appear later on (played by Morgan Spector), trying to help Chuck get a toehold in the movie business. In truth, the parallels with Rocky Balboa only go so far; Wepner was a lot more established – though a waggish reporter calls his bout with Ali “a fight between an artist and a house painter”, underlining the gulf in quality. Chuck doesn’t try to turn its journeyman into a secret artist, playing instead as a cheerful, tender cautionary tale (almost a comedy, though a very deadpan one) of a colourful buffoon touched by the fickle hand of Fate, getting in way over his head. Chuck isn’t perfect, or even very smart – but he’s human, and this modest movie is happy with that. If you punch him, does he not bleed?