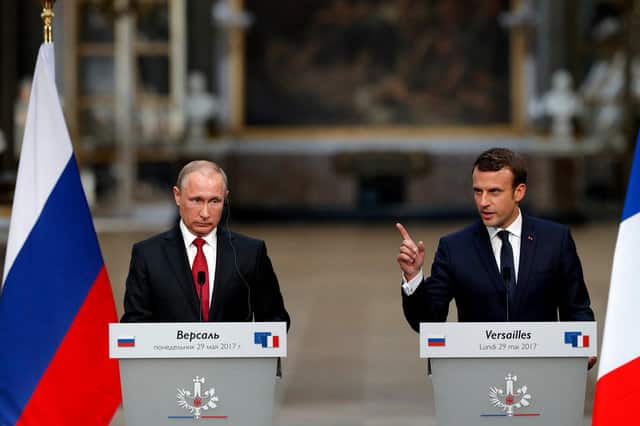 French President Emmanuel Macron affirmed his support for Syria’s opposition on Tuesday in a meeting with its chief coordinator, a day after hosting Russian President Vladimir Putin, a key backer of Syrian leader Bashar al-Assad.

The unannounced meeting with Riad Hijab and a broader delegation from the Riyadh-based High Negotiations Committee (HNC), which includes political and armed groups, came asMacron seeks to review French policy on the six-year civil war.

“The president spoke of his personal commitment to the Syria dossier and of his support for the Syrian opposition in view of a political transition,” his office said in a statement.

Opposition officials were not immediately available for comment on the meeting.

Macron‘s electoral victory has offered an opportunity for Paris to examine its policy on Syria with some considering the previous administration’s stance as too intransigent and leaving it isolated on the subject.

Macron, a newcomer to international diplomacy, said on Monday that his priority in Syria was to eradicate Islamist militants.

Alongside Putin in 17th century palace of Versailles outside Paris, Macron on Monday said he had agreed to set up a working group with Russia, including to exchange information. It was not immediately clear what that would entail.

Macron‘s government says it backs UN-mediated peace talks in Geneva. However, Macron also called for a “political and diplomatic framework to build peace” without specifying whether it was a new initiative or part of the UN process.

Easyjet founder pledges to leave half his fortune to charity