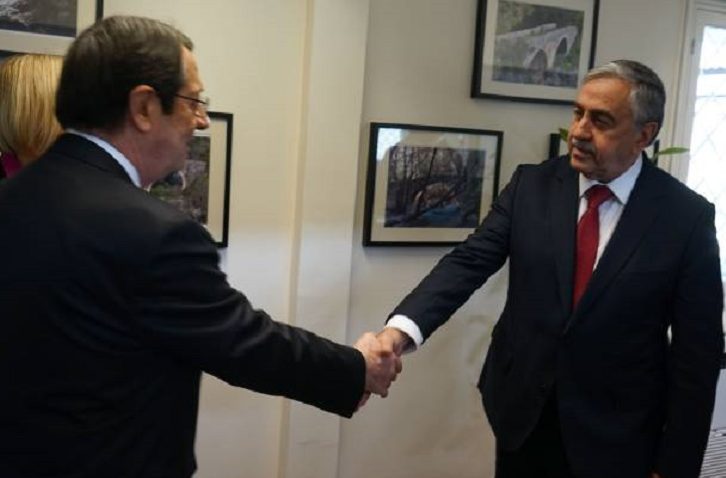 IF THERE is potential for substantive talks on the issue of security and guarantees, then flexibility is part of the dialogue, not a concession, President Nicos Anastasiades said on Thursday.

In an interview broadcast on Thursday evening by the Cyprus Broadcasting Corporation, Anastasiades said Sunday’s joint meeting he and Turkish Cypriot leader Mustafa Akinci will have with UN Secretary-General Antonio Guterres is “how the dialogue becomes not a dialogue of the deaf but on the substance of the chapters of security, territory, and the rest”.

The president repeated his assertion that his demand that security and guarantees are discussed at a possible international conference on Cyprus is not a precondition for attending, and expressed hope that the UN will agree.

Anastasiades revealed also that in the Big Apple, he will raise the matter of Akinci’s demand that Greek Cypriots cease their gas drilling activities while the talks process is ongoing.

He would let the UN chief know his own insistence on Akinci withdrawing this demand.

According to the state broadcaster, the meeting in New York will begin at around 7pm local time (2am Cyprus).

Also attending will be Espen Barth Eide, the UNSG’s Special Adviser on Cyprus.

Earlier, government spokesman Nicos Christodoulides said Sunday’s meeting was “good news,” as it gave the opportunity to brief Guterres directly on the state of play.

“[Guterres] is not inviting the two leaders to announce decisions, but for discussions to take place,” Christodoulides said.

“The point is not just to want a new Geneva, but a Geneva that will produce results, not one that will lead to an impasse.”

The international conference on Cyprus, convened by the UN in January, attended by the two communities of Cyprus, the three guarantor powers – the United Kingdom, Turkey, and Greece – and the European Union as an observer, produced no tangible results and efforts to reconvene it have stumbled on disagreement over the agenda.

“What is certain, considering what was discussed by President Anastasiades and the secretary-general, is that [Sunday’s meeting] won’t be a discussion over procedure,” Christodoulides said.

“The secretary-general is interested in substance, and in Geneva producing positive results.”

Ahead of the Sunday meeting, Anastasiades has called a session of the National Council for Friday afternoon.

Meanwhile, in remarks from the north, Akinci repeated the Turkish Cypriot side will “not accept preconditions – not in Nicosia, not in Geneva, not in New York”.

“The joint statement of February 11, 2014, bears Anastasiades’ signature, and it calls for the interdependent discussion of all chapters,” he said.

He was referring to Anastasiades’ insistence that a new Geneva conference produce results on security and guarantees, and territory, before other issues are discussed.

Akinci was speaking at a joint news conference with Turkey’s foreign minister Mevlut Cavusoglu, in the north.

Responding to a question, Cavusoglu rejected the notion that Turkey is intractable on security and guarantees.

“If you mean zero [Turkish] troops [post-settlement] and zero security, then there is nothing to discuss.

“But if they say ‘let us talk about how we can modernise, based on current realities, the matter of security and guarantees’, this could happen at a five-way conference. Let us sit down and talk about it.”

At this moment in time, Cavusoglu added, Ankara has in its sights only a Plan A – obtaining an outcome from a new conference on Cyprus, in turn paving the way for a comprehensive settlement.

Should Plan A fail, “we shall look at a Plan B and a Plan C. But for now, it is important for Plan A to succeed, and this is what we must focus on.”

The Turkish diplomat went on to accuse Anastasiades of placing conditions which he knows full well the other side cannot accept, thus allowing the Greek Cypriots to then accuse the Turkish Cypriots of torpedoing the process.

Meanwhile UN Special Representative for Cyprus Elizabeth Spehar said Guterres is “pleased that the two leaders have accepted his invitation” to Sunday’s dinner.

She expressed hope that the meeting could help move the Cyprus peace process forward and “perhaps reconvene a new conference on Cyprus in Geneva.”

“We welcome the fact that the UN secretary-general has taken initiative in overcoming the procedural deadlock and move the negotiations forward,” Akel said.

“We will continue to support efforts to find a solution within the agreed framework constructively.”

Socialists Edek said Anastasiades should seize the opportunity to demand a change in the format of the Geneva talks to include the five permanent members of the UN security council.

The Solidarity movement said the talks will “not be allowed to die.”

“One way or another, they will remain on life support for a long time,” leader Eleni Theocharous said.

In a statement, the Green party said Guterres’ initiative was “obviously the result of intense pressure from Turkey”.

“When the disagreement between Anastasiades and Akinci on the conference on Cyprus arose, the Turks had called on the secretary-general to step in and invite the two leaders to New York,” it said.

“At the National Council session, after being informed, we will make clear that any concessions by President Anastasiades in New York will not be accepted.”