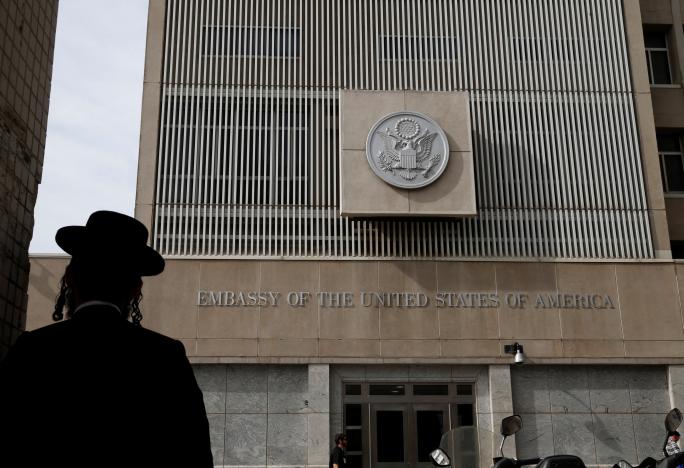 File photo: An ultra-Orthodox Jewish man stands in front of the US Embassy in Tel Aviv, Israel

President Donald Trump signed an order on Thursday to keep the US. Embassy in Israel in Tel Aviv temporarily instead of relocating it to Jerusalem, despite his campaign pledge to go ahead with the controversial move.

After months of fierce debate within his administration, Trump chose to continue his predecessors’ policy of signing a six-month waiver overriding a 1995 law requiring that the embassy be transferred to Jerusalem, an action that would have complicated his efforts to restart Israeli-Palestinian peace talks.

The White House insisted, however, that the decision – sure to disappoint Israel’s US supporters – did not mean that Trump was abandoning the goal of eventually shifting the embassy to Jerusalem. But a US official said no timetable has been set.

“He has repeatedly stated his intention to move the embassy,” the White House said in a statement. “The question is not if that move happens, but only when.”

With a deadline looming, Trump made the decision to defer action on the embassy “to maximise the chances of successfully negotiating a deal between Israel and the Palestinians, fulfilling his solemn obligation to defend America’s national security interests,” the White House said.

Palestinian leaders, Arab governments and Western allies had urged Trump not to proceed with the embassy relocation, which would have upended decades of US policy by granting what would have been seen as de facto US recognition of Israel’s claim to all of Jerusalem as its capital.

“Though Israel is disappointed that the embassy will not move at this time, we appreciate today’s expression of President Trump’s friendship to Israel and his commitment to moving the embassy in the future,” Israeli Prime Minister Benjamin Netanyahu’s office said in a statement.

NO MENTION OF EMBASSY

Trump avoided any public mention of a potential embassy move during his visit to Israel and the West Bank in May. Despite that, most experts are sceptical of Trump’s chances for achieving a peace deal that had eluded other US presidents.

The status of Jerusalem is one of the major stumbling blocks. Israel captured Arab East Jerusalem during the 1967 Middle East war and later annexed it, a move not recognised internationally. Israel considers all of the city its indivisible capital.

The Palestinians want East Jerusalem as the capital of their future state. Jerusalem is home to sites considered holy by the Jewish, Muslim and Christian religions.

Successive US administrations have insisted that Jerusalem’s status must be decided in negotiations between the two sides.

On the campaign trail, Trump’s pro-Israel rhetoric raised expectations that he would act quickly to move the embassy. But after he took office in January, the issue lost momentum as he met Arab leaders who warned it would be hard to rejuvenate long-stalled peace efforts unless he acted as a fair mediator.

Some of Trump’s top aides pushed for him to keep his campaign promise, not only because it would be welcomed by most Israelis but to satisfy the pro-Israel, right-wing base that helped him win the presidency. The State Department, however recommended against an embassy move, one US official said.

“No one should consider this step to be in any way a retreat from the president’s strong support for Israel and for the United States-Israel alliance,” according to the White House statement on the signing of the waiver.

Armenia, Azerbaijan ‘closer to war than at any time since 1994’