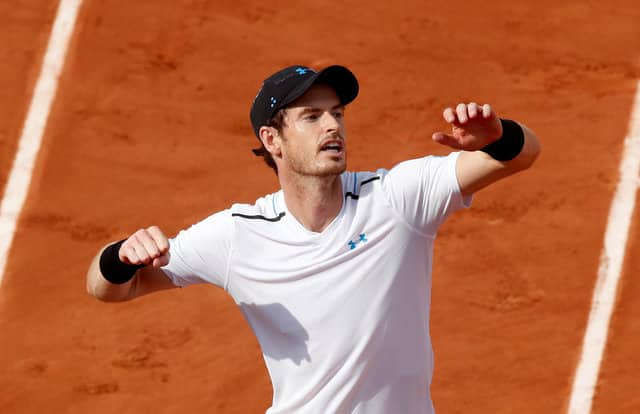 Andy Murray’s struggles on clay this season came back to plague him on Thursday as he ground out an unconvincing 6-7(3) 6-2 6-2 7-6(3) win against Slovakian big-hitter Martin Klizan.

Following a poor run on the red dirt for the world number one, he wavered again before seeing off his 50th-ranked opponent.

Recovering from illness and injury, Murray’s relationship with the clay has turned sour this year, with early losses in Madrid and Rome.

His form has been a far cry from the run he enjoyed just a year ago, when he contested three successive finals on the slow surface and came within one match of triumphing at Roland Garros.

On Thursday there was a listlessness about the top seed’s play from the start.

Out-hit and more surprisingly frequently out-thought in the first set by a player he had described as unpredictable, Murray faced breaks points in his first two service games, succumbing in the latter to trail 2-1.

The Scot shanked several backhands into the net and, when he tried to add power to his forehand, sent the ball long, muttering complaints to his box about his lack of movement and focus as the set drew to a close.

Alluding to his grumbles during play, Murray told courtside interviewer Fabrice Santoro: “You never said anything on the court. But me, I try to behave as well as I can but I can improve that for sure.”

Of his opponent’s dynamism, he added: “He goes for huge shots and he can hit winners from anywhere on the court… He comes up with unbelievable power.”

But nerves got the better of the Slovakian when he served for the first set at 5-4, missing one attempted drop shot so badly it failed to reach the net. That allowed the Scot – aided by mistimed backhand that turned into a clean winner – to break back.

Murray returned the favour when the set played out with a tiebreak, skying a ball long on his forehand and then double-faulting.

As if a switch had been flicked, a faster and keener Murray then materialised.

Reaching and then playing attacking shots off the searing Klizan forehands that had powered past him in the early stages, Murray pushed through the second set in 37 minutes and the third in one minute less.

The power drives the Slovakian had been misdirecting – he made 67 unforced errors in all – began to come off in the fourth set as Murray’s level dipped.

Klizan raced to a 5-2 lead before, with yet another momentum shift, the Scot broke back and took the set into a tiebreak.

He finished off the match with a characteristic stroke of brilliance, scrambling a volleyed winner off yet another powerful drive that the Slovakian had unleashed after reaching a Murray drop shot.

In what – fitness permitting – promises to be one of the ties of the third round, the Scot will play Argentina’s Juan Martin del Potro, a victor over Spain’s Nicolas Almagro, who was forced to pull out in the third set of their match with a knee injury.

“Juan Martin has come back from some injuries and had some tough draws. I sure we’ll get a good crowd and it’ll be a great atmosphere,” Murray said.