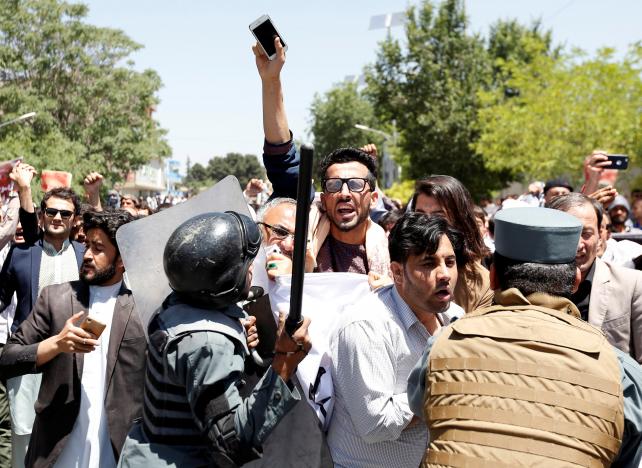 Afghan riot police clash with demonstrators during a protest in Kabul, Afghanistan June 2, 2017

Protesters in the Afghan capital demanding the resignation of President Ashraf Ghani’s government after this week’s devastating truck-bomb attack clashed with riot police on Friday and at least four people were killed.

The violent protests added to pressure on Ghani’s fragile and divided government, which has been powerless to stop a string of high profile attacks in the capital that have killed hundreds of civilians over recent months.

Wednesday’s bomb attack, at the beginning of the Muslim holy month of Ramadan, was one of the worst in Kabul since the US-led campaign to topple the Taliban in 2001 and underlined the growing violence across much of the country.

More than 1,000 demonstrators, many carrying pictures of bomb victims, rallied in the morning near the site of the blast, which killed more than 80 people and wounded 460, holding Ghani and Chief Executive Abdullah Abdullah responsible.

“The international community has to put pressure on them and force them to resign,” said Niloofar Nilgoon, one of a relatively large number of women taking part in the protest. “They’re not capable of leading the country.”

As the standoff continued, the protest appeared to become more tense, with regular bursts of gunfire ringing out.

Police in riot gear used water cannon and tear gas to block protesters, many throwing stones, from gaining access to the road leading to the presidential palace.

By mid-afternoon, an official at the city’s Italian-run Emergency Hospital said at least four people had been killed and “several” wounded. The bodies of some of the dead, wrapped in white shrouds were held in the open by protesters.

Among the dead was the son of a prominent politician, according to Afghan media reports.

As well as attacking the government, some protesters demanded that Ghani execute prisoners from the Haqqani network, the Taliban-affiliated militant group that intelligence officials blame for the attack.

“Until we do that, we won’t have peace. The only way to get security is to punish criminals,” said another protester, Asadullah, who like many Afghans goes by one name.

However most of the anger appeared directed against the Western-backed government, underlining growing impatience with its failure to ensure security, almost three years after most foreign troops left Afghanistan.

“Ghani! Abdullah! Resign! Resign!” read one banner adorned with the pictures of bloodstained children and held out of a car window.

The pressure on the government complicates the choice facing US President Donald Trump’s administration which is considering plans to increase the number of American troops in the country by between 3,000 and 5,000 to help break what US commanders say is a “stalemate” in the war.

Taliban insurgents now control or contest about 40 percent of the country. Even before the attack, 715 civilians had been killed in the first three months of the year after nearly 3,500 in 2016, the deadliest year on record for Afghan civilians.

Cyprus Airways takes to the skies