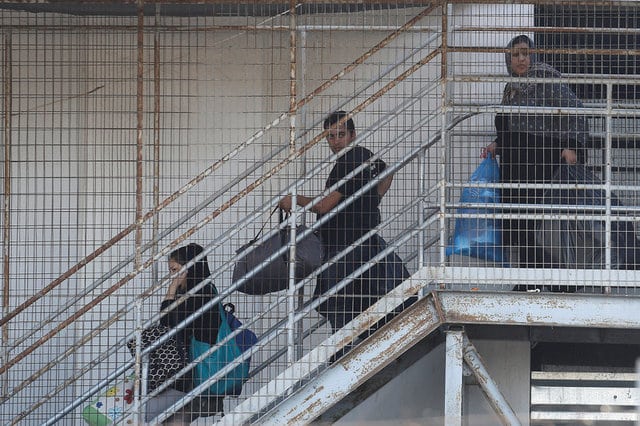 Migrants carry their belongings during a police operation to clear out a makeshift migrant camp at the disused Hellenikon airport in Athens, Greece June 2, 2017

Greek police on Friday began clearing out a makeshift migrant camp which sprung up in the former Athens airport over a year ago.

Authorities say about 100 refugees and migrants were still living in tents in Hellenikon, the former airport complex that also houses abandoned venues used in the 2004 Olympic Games, down from about 3,000 last year, most of which have been moved to other sites.

Human rights groups criticised conditions there as deplorable and unfit for humans. Hundreds slept crammed in tents in the old arrivals terminal last summer, in scorching temperatures with little food and bouts of crime and violence.

They were first taken to Hellenikon in November 2015 when police began transferring hundreds from the Greek-Macedonian border.

The government had long promised to empty the site, which it has agreed to lease to private investors under its bailout programme, but struggled to convince the migrants to move to other camps in the mainland.

Many migrants, mostly Afghans not eligible for an European relocation programme to other member states, feared moving farther from Athens would make it harder to leave Greece.

More than 62,000 migrants and refugees heading to northern Europe have been stranded in Greece since countries in the Balkans shut their borders to those seeking passage in March last year.

Georgiades says economy still not out of the woods

Greece imposes further restrictions on unvaccinated, even if they test negative

Johnson rebuffs demand for talks on Parthenon marbles, Cyprus on the agenda

Greece wants dialogue with UK for return of Parthenon sculptures