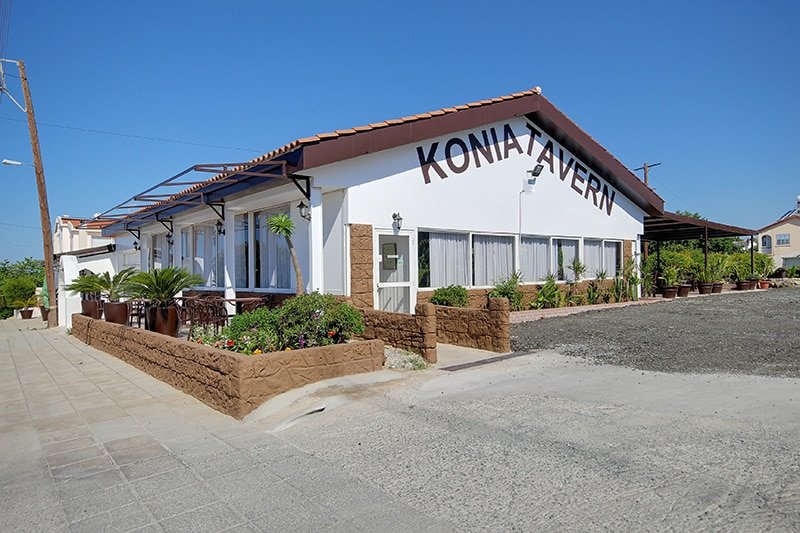 It is possible to sum up the long term appeal of the Konia tavern when you come across hire cars crawling around the village and panic stricken faces roll down car windows to ask ‘has the Konia Tavern closed own?’ It hasn’t, it has just moved down the street.

The new venue has actually been something of a white elephant of an eatery. In one of its many reincarnations it was called the Kamaroudi, and over the years several people have tried to make the place work, all failed, especially the last owner who had a chef wedded to the microwave. It’s all change on that front as the place is once again being run professionally by a local family with over a decade of experience consistently serving the very best meze and grilled goodies, all without a trace of any of those dreaded ‘international’ dishes.

The first thing to be served is a brimming platter filled with rocket, coriander, and spring onions or whatever leafy veggie is in season, before starting the meze.

This involves everything from couscous and grilled halloumi to the welcome bowl of steamed spinach, a plate of braised mushrooms, sheftalia, and substantial grilled pork chops about the size of an elephant’s ear, which were accompanied by proper, piping hot pita and excellent homemade chips. Those who do not care to go down the meat fest route can opt for a vegetarian meze. The other rather nice point about the new premises is the large outdoor eating area plus plenty of off road parking right outside the door.

Everything we ate was fresh, clean and delicious, just the way proper home-cooked food should be. I enjoyed a plate of calamari and chips and my friend’s husband opted for the elephant’s ear whereupon silence ensued on his part as he worked his way through this major portion and then pronounced he ‘couldn’t possibly eat another thing’ before demolishing a second plate of chips. That’s the secret to Michael’s success, he has a great grill master in the kitchen who is an expert at making grown men salivate over his pork chops, T bone and sirloin steaks, not forgetting the ever popular grilled lamb chops, all grilled with the meat retaining its juices and arriving on your plate deceased but mercifully not yet cremated.

The only sweet served other than seasonal fruit is the quite simple but superb dish of ricotta type cheese, coated with a thick covering of carob sauce – here the contrast in flavours and textures was perfect. There is nothing startling about the dishes on offer at the Konia Tavern, all come straight from the tried and tested Cypriot meze textbook, offering a consistently solid rustic appeal that will soothe the soul and satisfy one’s hunger. There is also on offer a boiled lamb’s head but rest assured this culinary gem is not served as part of the meze as Michael has been in the business long enough to know that this might just be a bit of a no no for those who originate from less adventurous culinary climes.

The Konia Tavern is a true original, an old school tavern with an owner who loves what he does and genuinely relishes meeting new people. Here there is always a warm welcome and over the years he has probably done more to promote Cypriot traditional dishes to foreigners than the Cyprus Tourism Organisation.

Plant of the week: Extraordinary range of claims