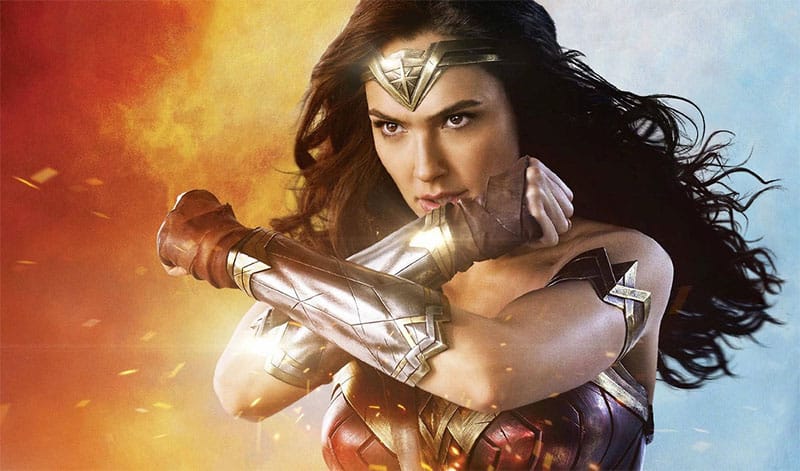 Wonder Woman in her latest form is a truly distinguished new competitor to the male-dominated world of superhero movies. Since her inception in 1941 in DC comic books with her patriotic red bustier embossed with a golden eagle and blue shorts with white stars, Wonder Woman has become a symbol of female empowerment in a comic book world dominated by male superheroes like Batman, Superman and Iron Man, and by male fans. But this is more than just a breath of fresh air, it’s a compelling, philosophical, woman-led action film that questions authoritarianism, power and patriarchy, war, self evolution and love; both romantic and that of humanity, seasoned with some of the most awesome fight scenes in superhero history!

Wonder Woman is no longer a character for girls to idolise, she is now a warrior for all to admire. Steering away from the cynicism that most of our super heroes are fueled by today, Wonder Woman fights to protect the good in people, of self realisation and gender equilibrium.

The film begins in the Louvre Museum, Paris, where Diana Prince (aka Princess Diana and Wonder Woman), who works as an expert in ancient weapons, receives ‘the original’ photo of herself with a group of men from during WWI. This photo is not only hugely significant for the film’s narrative but also because both Wonder Woman and the photo were briefly introduced in Batman V Superman: Dawn of Justice, opening the way for Wonder Woman to enter our hearts and minds. The photo inspires reflection and Diana takes us back to the beginning; to the luscious secret island of Themyscira, home to the Amazons (a race of women created by the Gods to influence men’s hearts with love and therefore bring peace.) Sadly, the humans enslaved the Amazons until a war helped them break free and start life on the paradise island where they proceeded to train relentlessly, becoming incredible warriors. Diana (former Israeli army soldier Gal Gadot) is the daughter of Amazonian Queen Hippolyta (Connie Nielsen) and niece to the fierce warrior General Antiope (Robin Wright).

As a child, Diana watches and secretly mirrors the tribe’s combat training until her aunt, aware of the child’s special abilities, trains her to become an unconquerable warrior. Soon enough, modern reality crashes through their bubble in the form of a falling plane followed by a group of German WWI soldiers. Things quickly turn ugly and an epic fight of filmic and gender history commences. The Amazons take on the Germans with an air flipping, arrow throwing show like no other. As the men fight behind bullets, there are casualties and Diana’s eyes are opened to the cruelty of mankind. Diana finally leaves the island with American pilot Steve Trevor (Chris Pine), who she saved, and sets off to eliminate war with the destruction of Ares (the God of War,) who she believes is behind all the suffering she’s recently been made aware of.

Diana’s transformation is told with humour, depth and spectacular fighting movements; from naive warrior to gripping hero, fighting with men in war to end all wars. Meanwhile transporting us on her journey as she discovers her full powers and destiny.

Director Patty Jenkins did an incredible job on this, as she did on her previous directorial task on Monster. With the combination of a fantastic script, excellent directing and phenomenal acting by all, we see Diana grow as she studies the lack of good sense of man while questioning her role in the world. The fight scenes are packed with technical brilliance and emotional depth, making them so much more relatable. And Gadot gives an impressive performance as Diana bringing out the character’s innocence, strength, intelligence and tenacity, as she takes on gunfire, explosions and toxic poisons.

Wonder Woman roars with power as a protector of the weak and vulnerable and defender of the people (despite their own stupidity). She’s fierce, she questions her own convictions and she loves deeply. The chemistry between Diana and Steve is by far the best superhero couple witnessed in recent history. Steve’s charismatic charm with Diana’s innocent yet blunt character is magic. The struggle of watching Steve’s plight as he tries to integrate this Amazonian into the rest of the world is subtle comic gold.
And of course, let’s not forget the baddies! But then who are the baddies? Now that’s there’s a question. For now, let’s run with the delectably performed and brutally vicious super nasty Dr. Poison (Elena Anaya) and General Erich Ludendorff (Danny Huston.)

To conclude, a new era of film making; watch it!

Murray eases past Khachanov into quarter-finals