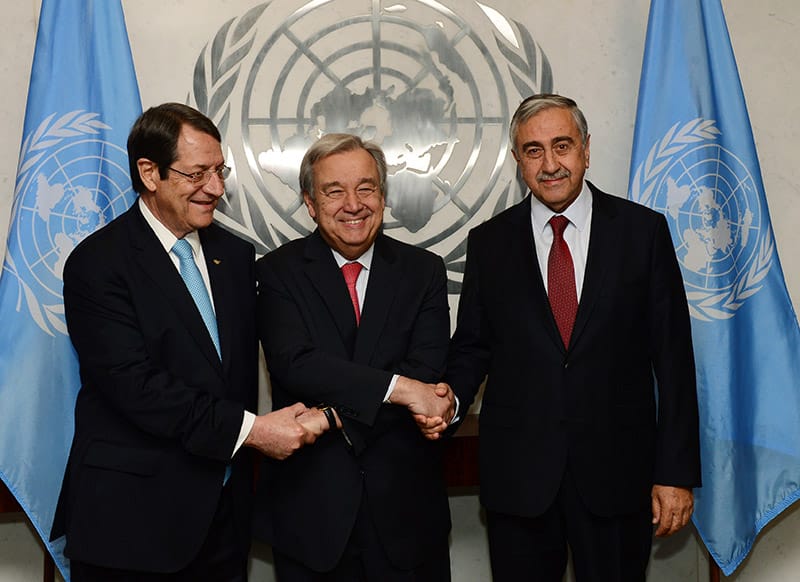 The Greek Cypriot side appears satisfied with the outcome of Sunday’s meeting in New York with the UN Secretary General and the Turkish Cypriot leader, according to a diplomatic source, which pointed out the fact that the meeting highlighted the pivotal role security issues have in efforts to solve the Cyprus problem.

The resolution of security concerns will determine whether there is further progress in the peace effort, the same source said, adding that discussions on other aspects of the Cyprus question will take place in parallel but unless there is progress on the issue of security, there will be no progress on other matters.

On Sunday evening, the leaders of Cyprus’ two communities and the UN Secretary-General agreed on the need to reconvene the Conference on Cyprus in June in line with the 12 January statement of the conference, the UN has announced.

The Special Adviser of the Secretary-General, Espen Barth Eide, will engage with all participants in the preparation of a common document to guide the discussions on security and guarantees, based on the outcome of the meetings of the conference on Cyprus in Geneva and Mont Pelerin.

Cyprus President Nicos Anastasiades and Turkish Cypriot leader Mustafa Akinci agreed to continue in parallel the bi-communal negotiations in Geneva on all other outstanding issues, starting with territory, property and governance and power-sharing.

In the follow-up to the meeting in New York on Sunday evening, the Secretary-General Antonio Guterres will reach out to the other participants of the conference: Greece, Turkey and the United Kingdom and the European Union as an observer.

Eide’s preparatory work, ahead of a new Geneva conference, is set to lead to a common document for all participants, something which Nicosia and Greece have advocated, the same source has said.

“It is crystal clear that the outcome of discussions on security and guarantees will determine how the peace process will continue. For the first time this is recognized clearly in an announcement by the Secretary General,” the source pointed out.

It is also noted that the sequence in which the negotiating chapters are mentioned, beginning with security and moving on to territory, property and governance and power sharing, is important, the diplomatic source believes.

Sunday’s meeting between Guterres-Anastasiades-Akinci has been described overall as good, nonetheless there were some lively moments during the discussions.

The UN Secretary General had full control of the entire procedure from beginning to end, listened to the arguments put forward by both sides and in the end contributed positively to the draft of the final outcome, which satisfies the Greek Cypriot side, the same source noted.

Akinci, it is said, wanted a reference to a “consolidated document”, meaning listing all the views, instead of a common document.

According to well informed sources, in his initial remarks at the meeting President Anastasiades explained in detail what has been agreed so far at the talks, pointing out that a proposal he submitted in May is fully in line with that and does not annul any of the agreed points. He explained that the proposal was based on what has been agreed and aims to move the peace process forward in order to reach an agreement.

Negotiations, which have taken place interdependently, concern only four of the negotiating chapters, whereas the chapter of security and guarantees in essence has never been discussed. On territory, discussion related to only one criterion, and the two sides exchanged maps, it was noted.

President Anastasiades, according to the same sources, stressed that all chapters have to reach the same level, meaning that agreement must be within reach on the issues of territory and security to allow the dialogue to continue.

He also stressed that now is the time of truth and Turkey has to decide and state concretely whether it wants to proceed or not.

The President is said to have commented on Akinci’s remarks, prior to the New York meeting, who apportioned blame on the Greek Cypriot side.

A UN official has told CNA that Akinci’s remarks were unwarranted just before the meeting whereas she talked in a positive manner about Anastasiades’ response.

Leptos and Peyia look to Paphos district office for solutions